This section discusses the design and the detailed algorithm of the temporal multi-resolution analysis framework that can handle both CUT and GT transitions in a consistent manner. The major problem in shot boundary detection is the noise introduced by camera, object motion and flashes. We discuss the solution to eliminate the wrong boundaries and improve the system precision.

The TMRA system has 3 phases. In the feature extraction phase, feature vectors suitable for the TMRA are computed. In the shot boundary detection phase, transitions are characterized and TMRA algorithm is applied to obtain the transition boundaries. This result will include many wrong transitions (insertions). In the elimination phase, motion analysis and flash detection are applied to remove insertions due to motion and abrupt flash noises. Figure 8.6 shows the system architecture for shot boundary detection. The following sections discuss in detail each of these three phases.

Furthermore, we obtain the reduced DC image from DC image by dividing the original DC image into 8x8 bins, and computing the value of each bin as the average of the DC coefficients of all pixels covered by that bin. In this way, we reduce the original DC image to 64 bins, represented by: rdcl = (rp1, rp2,…,rp64). Here rdcl denotes the reduced dc image for frame l, and rpm is the mth bin of the reduced DC image. It should be noted that each bin is attached to a specific location and thus this is a color-spatial representation.

The distance between two frames in the reduced DC feature space is:

The motion vector represents the motion of a macroblock of 16x16 pixels. It contains information about the type of temporal prediction and corresponding motion vectors used for motion compensation. A continuously strong inter-frame reference will be present in a stream as long as there is motion continuity. The temporal change in motion based feature vector can be used to define and characterize the occurrence of a transition. Significant instability of this feature is used as a sign of shot changes. So we incorporated a motion-based feature vector in our system along with the color based feature vector aiming to: (a) eliminate the falsely detected transitions caused by camera/object motion; and (b) accurately detect transition boundary. In MPEG compressed stream only forward motion vectors are used. In the case of B frames, averaging and approximations are applied to obtain forward motion vectors. Alternatively in the raw domain we compute the motion vectors using block based motion estimation such as spiral search method [44]. Since the motion vectors tend to be sparse, a 3x3 median filtering is applied to the motion vectors. Also boundary blocks are not considered, as they tend to be erroneous. Motion angle is computed as

where i, j represents macroblock row and column value.

The motion vectors obtained can be used to form the Motion Angle Histogram feature for videos. By quantizing the motion angles into intervals of 6 degrees, we can obtain a reduced MAHistogram consisting of 60 bins, represented by: rmal = (rp1, rp2,…,rp60), where rpm is the mth bin of the reduced motion angle. It should be noted that each bin is attached to a specific location and thus this is a color-spatial representation.

The distance between two frames in the reduced motion feature space is:

In this phase, TMRA algorithm is applied to determine the potential transition point and their type. It performs the wavelet transformation on the color and motion based feature vectors. The choice of feature vector is application specific and some examples are the HSV color based histogram, 256-bin intensity histogram, etc.

By making the fundamental observation that a video shot boundary is a multi-resolution phenomenon, video transitions can be characterized by the following features:

These features can be obtained respectively by:

In this way, all the transition points are represented in the whole framework by the three multi-resolution features.

Using the ideas in transition characterization, a temporal multi-resolution algorithm was developed to detect and characterize both CUT and GT shot boundaries. To illustrate the overall algorithm, we use a video named "Echosystem.mpg." This is an MPEG-1 compressed video sequence with 170 frames. The video sequence contains 2 CUT's and 3 GT' s. Sample sequence with frames 69–132 is shown in Figure 8.7. Figure 8.8 shows the frames following the 5 transitions. The overall algorithm is described as follows. 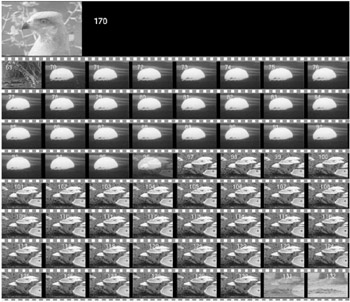 In the compressed domain, three feature vectors are obtained in the model, DC64, DCHistogram and MA64. In the DC cases, DC coefficients are extracted first. The DCHistogram is obtained by counting the 64-bin luminance histogram of the DC image. The DC64 is obtained by splitting the DC image into 8 by 8 sub-windows and averaging every window to form the 64D feature vector. MA64 is computed from the extracted motion vectors from the compressed stream and along with the macroblock type counts.

This is done by computing the Canny wavelet transform of f(x) for the temporal resolutions of a = 2j for j = 0 to 4. We thus obtain a set of coefficients of the form Wc = |Waf(x)|. By applying the transformation on the compressed domain DC64 and MA64 feature vectors, the corresponding wavelet coefficients obtained are WDC64 and WMA64, respectively. Figure 8.9 shows the WDC64 values of the video "Echosystem.mpg."

Figure 8.9: Examples of coefficients after the transformation (WDC64).

The goal of video segmentation is not only to detect the occurrence of a transition, but also to locate the exact positions of the CUT/GT to segment the video. In a GT, both start position and end position need to be detected. Low resolution of WDC64 and WMA64 helps to detect the occurrence; while high-resolution helps to characterize the start and end of the transition.

represents coarse resolution R3, since gradual transition will have a slightly larger difference between frames than those within the normal shot. So in the higher resolution, the boundaries would show up as local maxima points. To identify this boundary, we use both the DC64 and MA64 wavelet coefficients. For coarse resolution (Resolution 3) DC64 wavelet coefficients are used and for high resolution (Resolution 0) MA64 wavelet coefficients are used. The reason for this choice is because DC64 feature space fails to characterize the beginning and ending frames of the transitions accurately at the high resolution. This is due to the fact that the rate of change in DC64 feature space is not high and doesn't result in a distinguishable peak. Hence we designed a new feature space based on the direction of motion along with counts representing static (skip) and intra (blocks having significant change) blocks. As a result of this we observe that even a gradual change resulted in an abrupt spike (peak) at the start and end of the transition. This is captured as the boundary of the transition.

For each potential transition point identified as local maxima in

, we use it as the anchor point to search for the two nearest and strongest local maxima in

. Thus for each potential transition we can identify the 'start' and the 'end' of the transition. This is illustrated in Figure 8.11. The two strong local maxima in

Figure 8.11: Finding the start and end frame number of a transition.

The problem of choosing an appropriate threshold is a key issue in applying TMRA for shot boundary detection. Heuristically chosen global threshold is not suitable as the shot content changes from scene to scene. So adaptive thresholds are better than a simple global threshold. The wavelet coefficient for DC64 will have many weak local maxima. These points should be deleted before the rest of the algorithm steps are applied. This will improve the performance of the system. 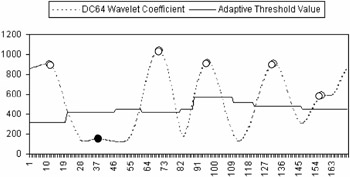 The last phase of the TMRA algorithm is the elimination of wrong transitions due to motion and abrupt flashes in the shot. The following sections give a brief description on the method to characterize such activities in the multi-resolution framework.

Flash occurrences are common in video sequences, which often makes the shot detection method wrongly classify them as cut. In video segmentation system, flash detection is one of the difficult tasks that seriously affect the system performance. With the TMRA, this problem can be easily resolved by comparing WMA64 at different resolutions. Figure 8.13 shows an example where the strength of local maximas corresponding to a flash decreases drastically as the resolution decreases. This is because the duration of flash tends to be short. It thus results in large local maxima at higher resolution space, and attenuates quickly in lower resolution space. This can be extended to any other similar effects of flash, for example, the fire and fireworks, etc. By using this characteristic we can detect and remove such abrupt noises.

Figure 8.13: Decreasing strength of WMA64 with lowering resolution corresponding to a flash.

Fast camera and object motions account for a large number of wrong detection of transitions. Camera motion and object motion have the same effect as the gradual transition (for slow motion) and cut (fast motion). It is very difficult to distinguish them from correct transitions. With the TMRA framework, the MA64 feature vector is specially designed to capture the motion information.

For each potential transition, the quadratic distance between mean absolute differences (QMAD) of the feature vector is computed. Three such quadratic MADs are computed between frames selected in the following manner.

is the normalizing factor in the above equations.

The QMADs for the potential transitions (CUTs and GTs) are computed in both the DC64 and MA64 feature spaces. The following condition is checked to decide whether a transition is due to motion or is a real CUT/GT transition.