This section provides a very brief overview of video compression and video compression standards. The limited space precludes a detailed discussion, however we highlight some of the important principles and practices of current and emerging video compression algorithms and standards that are especially relevant for video communication and video streaming. An important motivation for this discussion is that both the standards (H.261/3/4, MPEG-1/2/4) and the most popular proprietary solutions (e.g. RealNetworks [6] and Microsoft Windows Media [7]) are based on the same basic principles and practices, and therefore by understanding them one can gain a basic understanding for both standard and proprietary video streaming systems. Another goal of this section is to describe what are the different video compression standards, what do these standards actual specify, and which standards are most relevant for video streaming.

Video compression is achieved by exploiting the similarities or redundancies that exists in a typical video signal. For example, consecutive frames in a video sequence exhibit temporal redundancy since they typically contain the same objects, perhaps undergoing some movement between frames. Within a single frame there is spatial redundancy as the amplitudes of nearby pixels are often correlated. Similarly, the Red, Green, and Blue color components of a given pixel are often correlated. Another goal of video compression is to reduce the irrelevancy in the video signal, that is to only code video features that are perceptually important and not to waste valuable bits on information that is not perceptually important or irrelevant. Identifying and reducing the redundancy in a video signal is relatively straightforward, however identifying what is perceptually relevant and what is not is very difficult and therefore irrelevancy is difficult to exploit.

To begin, we consider image compression, such as the JPEG standard, which is designed to exploit the spatial and color redundancy that exists in a single still image. Neighboring pixels in an image are often highly similar, and natural images often have most of their energies concentrated in the low frequencies. JPEG exploits these features by partitioning an image into 8x8 pixel blocks and computing the 2-D Discrete Cosine Transform (DCT) for each block. The motivation for splitting an image into small blocks is that the pixels within a small block are generally more similar to each other than the pixels within a larger block. The DCT compacts most of the signal energy in the block into only a small fraction of the DCT coefficients, where this small fraction of the coefficients is sufficient to reconstruct an accurate version of the image. Each 8x8 block of DCT coefficients is then quantized and processed using a number of techniques known as zigzag scanning, run-length coding, and Huffman coding to produce a compressed bitstream [8]. In the case of a color image, a color space conversion is first applied to convert the RGB image into a luminance/chrominance color space where the different human visual perception for the luminance (intensity) and chrominance characteristics of the image can be better exploited.

A video sequence consists of a sequence of video frames or images. Each frame may be coded as a separate image, for example by independently applying JPEG-like coding to each frame. However, since neighboring video frames are typically very similar much higher compression can be achieved by exploiting the similarity between frames. Currently, the most effective approach to exploit the similarity between frames is by coding a given frame by (1) first predicting it based on a previously coded frame, and then (2) coding the error in this prediction. Consecutive video frames typically contain the same imagery, however possibly at different spatial locations because of motion. Therefore, to improve the predictability it is important to estimate the motion between the frames and then to form an appropriate prediction that compensates for the motion. The process of estimating the motion between frames is known as motion estimation (ME), and the process of forming a prediction while compensating for the relative motion between two frames is referred to as motion-compensated prediction (MC-P). Block-based ME and MC-prediction is currently the most popular form of ME and MC-prediction: the current frame to be coded is partitioned into 16x16-pixel blocks, and for each block a prediction is formed by finding the best-matching block in the previously coded reference frame. The relative motion for the best-matching block is referred to as the motion vector. 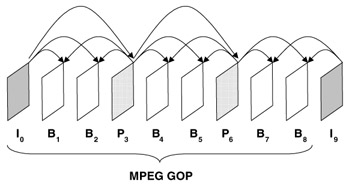 Figure 34.1: Example of the prediction dependencies between frames.

Video compression standards provide a number of benefits, foremost of which is ensuring interoperability, or communication between encoders and decoders made by different people or different companies. In this way standards lower the risk for both consumer and manufacturer, and this can lead to quicker acceptance and widespread use. In addition, these standards are designed for a large variety of applications, and the resulting economies of scale lead to reduced cost and further widespread use.

Currently there are two families of video compression standards, performed under the auspices of the International Telecommunications Union-Telecommunications (ITU-T, formerly the International Telegraph and Telephone Consultative Committee, CCITT) and the International Organization for Standardization (ISO). The first video compression standard to gain widespread acceptance was the ITU H.261 [11], which was designed for videoconferencing over the integrated services digital network (ISDN). H.261 was adopted as a standard in 1990. It was designed to operate at p = 1,2, …, 30 multiples of the baseline ISDN data rate, or p x 64 kb/s. In 1993, the ITU-T initiated a standardization effort with the primary goal of videotelephony over the public switched telephone network (PSTN) (conventional analog telephone lines), where the total available data rate is only about 33.6 kb/s. The video compression portion of the standard is H.263 and its first phase was adopted in 1996 [12]. An enhanced H.263, H.263 Version 2 (V2), was finalized in 1997, and a completely new algorithm, originally referred to as H.26L, is currently being finalized as H.264/AVC.

The Moving Pictures Expert Group (MPEG) was established by the ISO in 1988 to develop a standard for compressing moving pictures (video) and associated audio on digital storage media (CD-ROM). The resulting standard, commonly known as MPEG-1, was finalized in 1991 and achieves approximately VHS quality video and audio at about 1.5 Mb/s [13]. A second phase of their work, commonly known as MPEG-2, was an extension of MPEG-1 developed for application toward digital television and for higher bit rates [14]. A third standard, to be called MPEG-3, was originally envisioned for higher bit rate applications such as HDTV, but it was recognized that those applications could also be addressed within the context of MPEG-2; hence those goals were wrapped into MPEG-2 (consequently, there is no MPEG-3 standard). Currently, the video portion of digital television (DTV) and high definition television (HDTV) standards for large portions of North America, Europe, and Asia is based on MPEG-2. A third phase of work, known as MPEG-4, was designed to provide improved compression efficiency and error resilience features, as well as increased functionality, including object-based processing, integration of both natural and synthetic (computer generated) content, content-based interactivity [15].

The H.26L standard is being finalized by the Joint Video Team, from both ITU and ISO MPEG. It achieves a significant improvement in compression over all prior video coding standards, and it will be adopted by both ITU and ISO and called H.264 and MPEG-4 Part 10, Advanced Video Coding (AVC).

Currently, the video compression standards that are primarily used for video communication and video streaming are H.263 V2, MPEG-4, and the emerging H.264/MPEG-4 Part 10 AVC will probably gain wide acceptance.

What Do The Standards Specify?

An important question is what is the scope of the video compression standards, or what do the standards actually specify. A video compression system is composed of an encoder and a decoder with a common interpretation for compressed bit-streams. The encoder takes original video and compresses it to a bitstream, which is passed to the decoder to produce the reconstructed video. One possibility is that the standard would specify both the encoder and decoder. However this approach turns out to be overly restrictive. Instead, the standards have a limited scope to ensure interoperability while enabling as much differentiation as possible.

The standards do not specify the encoder nor the decoder. Instead they specify the bitstream syntax and the decoding process. The bitstream syntax is the format for representing the compressed data. The decoding process is the set of rules for interpreting the bitstream. Note that specifying the decoding process is different from specifying a specific decoder implementation. For example, the standard may specify that the decoder use an IDCT, but not how to implement the IDCT. The IDCT may be implemented in a direct form, or using a fast algorithm similar to the FFT, or using MMX instructions. The specific implementation is not standardized and this allows different designers and manufacturers to provide standard-compatible enhancements and thereby differentiate their work.

The encoder process is deliberately not standardized. For example, more sophisticated encoders can be designed that provide improved performance over baseline low-complexity encoders. In addition, improvements can be incorporated even after a standard is finalized, e.g. improved algorithms for motion estimation or bit allocation may be incorporated in a standard-compatible manner. The only constraint is that the encoder produces a syntactically correct bitstream that can be properly decoded by a standard-compatible decoder.

Limiting the scope of standardization to the bitstream syntax and decoding process enables improved encoding and decoding strategies to be employed in a standard-compatible manner - thereby ensuring interoperability while enabling manufacturers to differentiate themselves. As a result, it is important to remember that "not all encoders are created equal", even if they correspond to the same standard.