It is important to note that the above three visual predicates can actually be implemented in many different ways. Section 3.1.3 gives several examples of how to implement these visual predicates using, for instance, color histograms, wavelets for implementing texture distances and wavelet-based shape descriptors.

As our algebra can work with any visual predicates whatsoever, we continue with the algebraic treatment here, and leave the example visual predicate descriptions of Section 3.1.4. We start with the concept of a path.

Intuitively, paths are used to access the interior components of a complex type. For example, if we have an attribute called color of type [red:int,green:int,blue:int] and we want to find all very "bluish" objects, we may use the path expression color.blue to reference the blue component of the color attribute of an object.

We are now ready to define selection conditions.

Definition (selection condition) Suppose T is a set of types VP, p1 and p2 are paths over the same type τ ∈ T, v ∈ d om(τ), and VP is a set of visual predicates. Then:

We are now ready to define the semantics of selection conditions. Suppose v is a video and ρ is its association map. Throughout this paper, we assume that there is some oracle O that can automatically check if a visual predicate is true or not.

In practice, this oracle is nothing more than the code that implements the visual predicates (e.g., the various matching algorithms). We now define what it means for a block sequence to satisfy a selection condition.

Definition (satisfaction) Suppose O is an oracle that evaluates visual predicates, b is a block and C is a selection condition. We say that b satisfies C w.r.t. O, denoted b ⊨ C, iff:

We are now in a position to define selection.

Definition (selection) Suppose v is a video and C is a selection condition. The selection on C of video v, denoted σc(v) , is given by:

We assume that all blocks in σc (v) are ordered in the same way as they were in v, i.e., selection preserves order.

A color histogram is formed by discretizing the colors within an image. In other words, for each distinct color, we associate a bin. Each bin contains those pixels in the image that have that color.

Let histogram(I) be a function that returns the color histogram HI of a given frame I. histogram(I) operates as in the following:

In the following we show several color histogram-based distance functions. Figure 19.4 shows an example of histogram for the image in Figure 19.2(a).

We first define the concept of an L1-distance on color histograms due to [7].

For example, suppose we consider images having 512 colors. In this case, there would be 512 bins for each of the two images I1, I2. For each color, we compute the minimum of the number of pixels having that color in image I1 and I2. We add all these minima up. The denominator is just the number of pixels in the first image (when both images are of the same size, the denominator is the same irrespective of whether I1 is considered or I2 is considered). This function measures nicely the distance between two images. When there is wide variation between the color schemes of the two images, the numerator will be relatively small because for each color, the smaller of the number of pixels in images I1, I2 is counted.

Another notion of image distances based on color histograms is the L2-distance given in [11].

Definition (L2 distance) The L2-norm distance function is given by:

A=a[k,t] is an expression that denotes the cross-correlation between histogram bins.

It is well known in the literature [12] that color histograms are not sufficient to describe spatial correlations in images. In this section, we describe how textures may be used to define a distance between two images. Texture and shape have been widely analyzed and several features have been proposed [12], [13], [14], [15]. However, all the proposed visual descriptors exploit spatial interactions between a number of pixels in a certain region. In our AVE! system, we have used Wavelet Transform based descriptors in order to provide a multiresolution characterization of the images [16].

Let I be an image defined on a support Ω ⊆ ℜ2. Here, Ω is any arbitrary subset of ℜ2 . The continuous wavelet transform of I is the functional

where a is a scaling term and

represents the conjugate complex of ψ.

A widely used scheme for image processing applications is Mallat's algorithm [17]. This multiresolution approach is based on the well known subband decomposition technique where an input signal is recursively filtered by perfect reconstruction QMF low-pass and high-pass filters, followed by critical sub-sampling, e.g., subsampling by 2 in the bi-dimensional case [18], [2].

is the covariance of an image I:

IDX being the detail subbands of the X component in a given Color Space of an Image I.

We are now ready to define the texture distance between two images.

Definition (Texture Distance Ltext) Given two images I1 and I2, the texture distance Ltext is defined as

Thus far, we have focused on color distances and texture distances. A third type of distance between two images is based on the shapes of the images involved.

It is well known in the computer vision literature that the wavelet transform provides useful information for curvature analysis [19]. The idea is to find corner points and to use them as high curvature points in a polygonal approximation curve of the image. This task may be performed by means of Local Maxima of Wavelet Transform points. In our AVE! system, WT local maxima are calculated by using those points having a WT modulus which is longer than a certain threshold [20].

Definition (Shape Descriptor) A wavelet based shape descriptor is the sequence:

Definition (Shape Distance) Given two images I' and I", and two associated wavelet shape descriptors,

, the wavelet shape distance between I' and I" is given by

The analogy is further enhanced by the Projection operator that we define below. Given a video, whose blocks contain a number of different objects, projection takes as input a specification of the objects that the user is interested in, and deletes from the input video all objects not mentioned in the object specification list. Of course, pixels that in the original video correspond to the eliminated objects must be set to some value. We will introduce the concept of a recoloring strategy that automatically recolors appropriate parts of a video.

To define Projection, we first introduce some notation necessary for the two steps mentioned above.

Object extraction: given a block b, and a list obj-list of objects, object extraction returns a specification of the pixels associated with the objects mentioned in obj-list within block b.

We are now ready to give the definition of projection.

Definition (projection) Suppose v is a video, obj-list is a list of objects from v and Color is a recolor strategy. The projection of obj-list from video v, under recoloring strategy Color, denoted

We assume that all blocks in πobj-list,Color (v) are ordered in the same way as they were in v, i.e., projection preserves order.

Example. Assume we have a couple of videos, v1 and v2, whose visual objects are cats and dogs. Assume also that we are interested in a new video production, only about dogs. If WHITENING is the coloring strategy that sets to white the specified pixels, π<dog>,WHITENING ({v1, v2}) returns the set containing two videos v1' and v2', each one containing the dogs appearing in the corresponding given video, acting in a completely white environment.

In order to successfully define Cartesian Product of two videos, we need to explain what it means to "concatenate" two blocks together. This is done via the concept of a block merge function.

There are numerous examples of block merge functions. Three simple examples are given below. We emphasize that these are just three examples of such functions - many more exist.

Note that the above are just three examples of how to merge two blocks. Literally hundreds (if not thousands of variants) are possible. 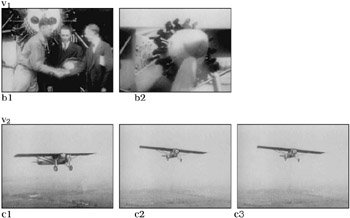 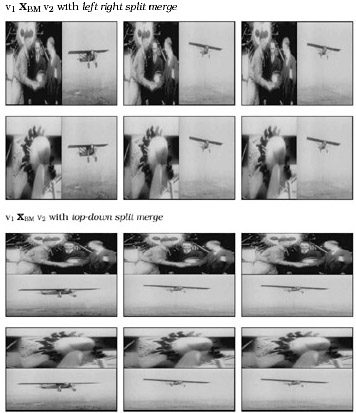 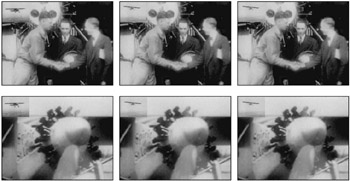 In classical relational databases, the join of two relations under some join condition C is simply the set of all tuples in the Cartesian product of the two relations that satisfy C. Fortunately, the same is true here.

This set is totally ordered in the same way as defined in the definition of the Cartesian product.

Intuitively, when we join two videos together, we merge the first block in v1 with all blocks in v2 when the merge satisfies C, then continue with the second block in v1 and so on. 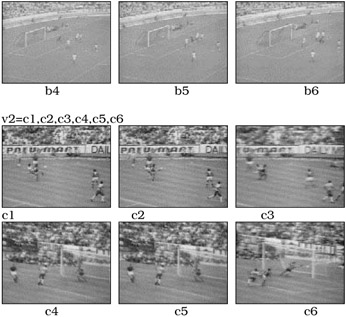 The selection condition is satisfied by v5 and c6; v6 and c6.

The only complication involved in defining these operations is that we must specify the order of the blocks involved.