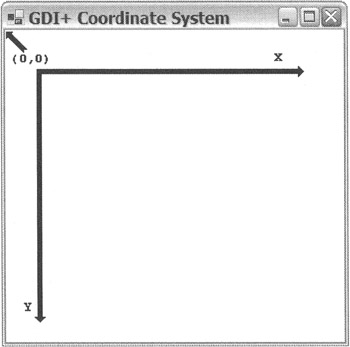 A key aspect of GDI+ is that it is supposed to be device independent. How can that be, if everything is rendered based on a pixel standard? Pixels are only one of several coordinate systems supported by GDI+ (see Table 11-4). For example, instead of coordinate (100, 100), meaning 100 pixels to the right and 100 pixels down, the meaning could be 100 millimeters to the right and 100 millimeters down. To change the coordinate system to be based on a different unit of measure, you need to change the PageUnit property of the Graphics class to a different GraphicsUnit.

It is also possible to move the origin (0, 0) away from the top-left corner to somewhere else the drawing surface. This requires you to translate the origin (0, 0) to where you want it located using the Graphics class's TranslateTransform() method.

The example in Listing 11-6 changes the unit of measure to millimeter and shifts the origin to (20, 20).

Listing 11-6: Changing the Unit of Measure and the Origin 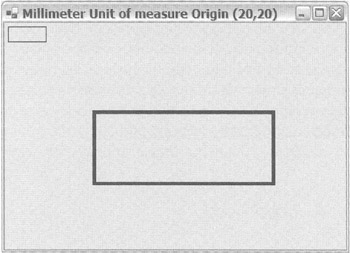 Figure 11-6: Changing the unit of measure and the origin

You should notice a couple of things in this example. First, the client size still uses pixel width and height. There is no PageUnit property for a form. Second, when you change the PageUnit of the Graphics class, all rendering from that point is changed to the new unit of measure. This is true even for the width of lines. Pens::Black creates lines 1 unit thick. When the unit is millimeters, Pens::Black will end up creating a line 1 millimeter thick.

Adobe After Effects 7.0 Studio Techniques
Managing Enterprise Systems with the Windows Script Host
Lotus Notes Developers Toolbox: Tips for Rapid and Successful Deployment
Practical Intrusion Analysis: Prevention and Detection for the Twenty-First Century: Prevention and Detection for the Twenty-First Century
Microsoft WSH and VBScript Programming for the Absolute Beginner
AutoCAD 2005 and AutoCAD LT 2005. No Experience Required
flylib.com © 2008-2017.
If you may any questions please contact us: flylib@qtcs.net
Privacy policy
This website uses cookies. Click here to find out more.
Accept cookies