The research was conducted in two phases using a linked “sequential mixed methods” approach, with the first phase based on the “interpretivist” paradigm (qualitative approach) that was linked to the second phase based on the “positivist” paradigm (quantitative approach) (Tashakkori & Teddlie, 1998). The first phase involved a literature review, informal in-depth interviews with experts internationally, and a case study of an Australian food processor centered netchain. A theoretical framework (Figure 2) was developed in the first phase using a grounded research method, with literature used to support the description of what was observed in the case study. [For a more detailed description, see Storer (2001).] In the model, it was suggested that expected future outcomes from the relationship were related to the nature of the inter-organizational information feedback system adopted in the chain, which, in turn, was related to current perceived outcomes of the chain (as suggested by Benedict & Margeridis, 1999; Bowersox & Closs, 1996; Stank, Emmelhainz, & Daugherty, 1996; Vijayasarathy & Robey, 1997). Further, the model argued that the results would be moderated by factors such as product and market uncertainty, relationship dependency and power, experience in the relationship and in the industry, as well as personal characteristics (as suggested by Ancona & Caldwell, 1992; Bensaou, 1999; Spekman, Kamauff, & Myhr, 1998). 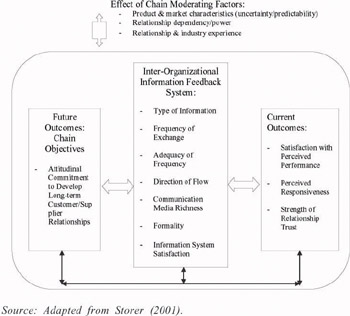 The aim of the second phase was to evaluate, test, and refine the theoretical framework based on a survey of food processors and a further perishable product chain case study. Support for the second phase of the research was received from a large Australian retail chain that provided introductions to four of their significant suppliers for each major food product category. All suppliers were significant to the retail chain in terms of volume, value, or strategic significance. A total of 45 food categories were covered and included dry, fresh, chilled, and frozen food products based on meat, dairy, fruit, vegetable, and cereals in the form of ingredients as well as snacks, meals, and drinks. Food processors varied from large multinational and national organizations to smaller regional suppliers.

In-depth interviews of 111 Australian food processor purchasing managers (30%), sales/marketing mangers (47%), and general managers/owners (23%) were conducted during April to December 2002. Where possible, interviews were conducted face to face, with phone interviews and self-completion used as a last resort. Relationships with 176 suppliers and 297 customers were discussed in the interviews. Interviewees were asked to discuss two suppliers or two customers that were significant in terms of volume, value, or strategic intent. Some interviewees answered questions for several different product categories, e.g., milk, cheese, and small goods.

A structured questionnaire (Appendix 1) was developed based on the framework developed in the food processor netchain case study (Storer, 2001). The aim was to get a description of the IOIS used to manage relationships with customers and suppliers. Of interest were the formal systems, such as biannual product and pricing reviews, as well as informal ad hoc systems used occasionally to resolve problems or discuss an opportunity.

For each type of information shared, details were sought of: communication media used; formality of the process; the frequency it was shared on average in a year (absolute frequency); frequency adequacy, i.e., was information exchanged as often as necessary (relative frequency); and the direction the information flowed (upstream, downstream or both directions) (Anderson, Lodish, & Weitz, 1987; Bensaou & Venkatraman, 1995; Borgen & Ohren, 1999; Choo, 1996; Daft & Lengel, 1986; Daft & Lengel, 1996; Dansereau & Markham, 1987; Ellinger, Daugherty, & Plair, 1999; Farace, Monge, & Russell, 1977; Huber & Daft, 1987; Mohr & Nevin, 1990). Perceived satisfaction with the information system was measured in terms of accuracy, reliability, and completeness; usefulness and relevancy; depth and range of content; and being timely and up to date (O’Brien, 1999).

Moderating variables included uncertainty, dependency/power, and experience. Uncertainty was measured as predictability of demand, production yield, and quality and quantity of supply; market competition; and changing consumer preferences (Ganesan, 1994; Kumar, Stern, & Achrol, 1992). The relationships dependency and power were measured as follows: availability of alternative customers and suppliers; importance to each other; influence; and ease of replacement (Ganesan, 1994; Kumar, Stern, & Achrol, 1992). Experience was measured in terms of the number of years working in the industry and with the organization (Doney & Cannon, 1997; Ganesan, 1994) as well as how well the industry and the other organization’s business were understood.

To explore the dynamics of the interaction over time, the information satisfaction and relationship outcome variables were measured in terms of the current situation and how it had changed over the last 5 years. Comments were recorded about respondents’ perceptions about the reasons for change. As a result of explanations about reasons for change, two additional questions were added about perceptions of customers/suppliers initiating new ideas to improve the category/business or to improve the organization’s knowledge of the industry.

The final series of tests were to determine if supplier-oriented boundary spanning staff (purchasing staff) had significantly different responses to customeroriented boundary spanning staff (sales staff). For each focal firm where data was collected about both customers and suppliers, a “within organizational comparison” was made of pairs of respondents. Initially bivariate analyses were conducted. The t-tests were run for metric scale variables, and chi-square tests were run for nominal and ordinal scale variables (Hair et al., 1998). When significant differences resulted across multiple variables, a discriminant analysis was run to determine which variables better explained the differences, as the dependent variable (customer or supplier) was nominally scaled (Klecka, 1980).