You have decided to use clustering in designing or modifying an infrastructure tier to provide highly available services.

How should you design a highly available infrastructure tier that protects against loss of service due to the failure of a single server or the software that it hosts?

As you design a highly available infrastructure tier, consider the following forces:

Install your application or service on multiple servers that are configured to take over for one another when a failure occurs. The process of one server taking over for a failed server is commonly known as failover. A failover cluster is a set of servers that are configured so that if one server becomes unavailable, another server automatically takes over for the failed server and continues processing. Each server in the cluster has at least one other server in the cluster identified as its standby server.

For a standby server to become the active server, it must somehow determine that the active server no longer functions. The system usually uses one of the following general types of heartbeat mechanisms to accomplish this:

Before the standby server can start processing transactions, it must synchronize its state with the state of the failed server. There are basically three different approaches to synchronization:

In most cases, when a standby server becomes active, it is transparent to the application or user that it is supporting. When a failure does occur during a transaction, the transaction may have to be retried for it to complete successfully. This raises the importance of coding the application in such a way that the failover process remains transparent. One example of doing so is including timeouts with retries when committing data to a database.

Additionally, most servers use Internet Protocol (IP) addresses to communicate; therefore, for a failover to succeed, the infrastructure must be able to support the transferring of an IP address from one server to another. An example of this is having network switches that can support the IP address transfer. If your systems infrastructure cannot support this, you may want to use a load-balanced cluster instead of a failover cluster. For more information, see the Load-Balanced Cluster pattern.

Scalability in failover clusters is typically achieved by scaling up, or adding more capability, to an individual server within the cluster. It is important to understand that a failover cluster must be designed to handle the expected load and that individual servers should be sized so that they can accommodate expected growth in CPU, memory, and disk usage. Failover Cluster servers are typically high-end multiprocessor servers that are configured for high availability by using multiple redundant subsystems. If the resource requirements of your solution are greater than the limitations of the servers in the cluster, the cluster will be extremely difficult to scale.

To help you better understand how to use failover clustering to achieve high availability, the following discussion walks through refactoring an already implemented basic solution, which contains a single system (single point of failure), into a highly available solution.

Initially, an organization might start with a basic solution architecture such as the one outlined in Figure 7.10 on the next page. Although the solution might meet initial availability expectations, certain factors such as an increase in the number of users or a need for less application downtime may force changes in the design. 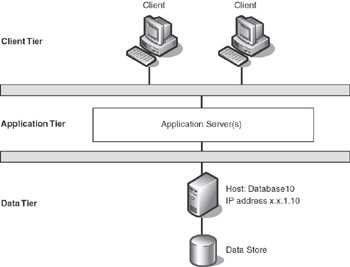 To increase the availability of the solution, the organization might decide to eliminate the potential single point of failure presented by the single database server in the data tier. You could do this by adding a server to the data tier and creating a failover cluster from the existing database server, the new server, and a shared storage device. In Figure 7.11, which illustrates this change, the cluster consists of the two servers connected to a shared storage array. 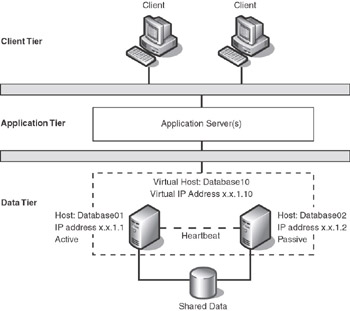 The Failover Cluster pattern results in the following benefits and liabilities: