Although the levels of abstractions help to address different user groups, they do not reflect the fact that a software solution encompasses much more than code components. A holistic view of building an enterprise solution includes custom-developed software, platform software, hardware infrastructure, and the deployment of software onto hardware. Because of the stark differences between these areas, it makes sense to align the patterns with this nomenclature.

Keep in mind that these four areas describe different viewpoints of the same solution. Therefore, unlike the levels of refinement, these viewpoints do not describe a hierarchy, but simply provide four different ways of looking at the same thing. You can compare these viewpoints to different types of maps. One map of a region may depict traffic networks such as roads and freeways, while another map of the same area shows the topography. Still another map may show state and county borders. Each map has its own vocabulary. For example, lines in the topographical map represent elevations, while lines in the traffic map represent streets. Nevertheless, all maps describe the same subject: a specific geographic region.

Each viewpoint itself can also focus on different levels of abstraction. Therefore, ESP depicts the following viewpoints as vertical slices across the pattern graph: database, application, and infrastructure. There is often a significant gap between the application and infrastructure viewpoints. Concepts, abstractions, and skill sets are sufficiently different to warrant the insertion of a buffer between the two that helps to bridge the divide. This viewpoint is called the deployment viewpoint.

This line of reasoning results in the four viewpoints shown in Table 2.2.

Figure 2.5 overlays these viewpoints as vertical lines over the pattern graph and the levels of abstraction. 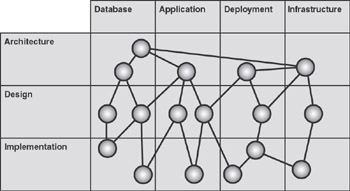 For the sake of simplicity, Figure 2.5 does not show the cluster boundaries. However, the clusters, the layers of abstraction, and the viewpoints exist in parallel. They represent different ways to access the same set of patterns.