See Figure 8-4 on page 153 for an expanded view of this solution, showing the "stack" of coupling adapter pairs over "virtual" connections between the source and target.

A number of factors affect the design of a Web service. In this section we discuss some of the factors we considered when using document style Web services in our sample application.

The disadvantages of document style include:

We used document style Web services in our sample solution to demonstrate the Direct Connection pattern because of the improved interoperability and looser coupling provided. The document-based mechanism can be used for both the Call and Message styles of communication.

We define the required message structures using schema files that are imported into the WSDL file for our Web service provider. There are a number of considerations when importing your message and type definitions, including:

In this section we provide an object model for our document style Web services scenario. We focus on how the source application is accessing the target application using Axis.

Figure 9-2 is a class diagram of the main application classes involved in initiating the direct connection between the source and target applications via document style Web services. 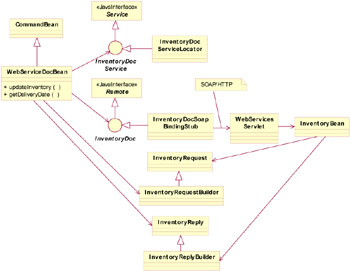 The interaction diagrams in Figure 9-3 and Figure 9-4 show the sequence of steps performed when the source application uses the WebServiceDocBean to perform the getDeliveryDate() method. In Figure 9-3:

The InventoryReply message then gets passed back through the chain to the requester side and to the WebServiceDocBean that made the request to begin with.