We introduced RTP in Chapter 3. RTP is universally used in VoIP and SIP systems to carry the media. We are not aware of any enterprise VoIP system that does not use RTP. RTP always rides on top of UDP. It doesn't make sense to use TCP, because it would add too much overhead and features such as retransmission of packets don't make sense for real-time data. Attacks against RTP are particularly nasty because they are simple and applicable in virtually any VoIP or SIP environment.

The time period over which audio is sampled and the rate that RTP packets are transmitted are determined by the codec. The transmission rate is fixed. Whether those packets actually arrive at a fixed rate at the receiving endpoint is dependent on the performance of the intervening network infrastructure and competition with other network traffic. RTP packets might be lost en route, might arrive at the receiving endpoint out of sequence, or might even be duplicated as they transit the network. Consequently, receiving endpoints are designed with the presumption that packets composing the audio stream will not arrive at the precise rate they were transmitted. Endpoints incorporate an audio "jitter buffer" and one or more algorithms to manipulate the characteristics of that jitter buffer in an attempt to produce the highest quality audio playback. The jitter buffer keys on RTP header information (for example, the sequence number, SSRC, and timestamp) to accomplish its function. If an attacker is in a position to spoof those RTP header data (and perhaps the fields of lower layer protocol headers), he can trick a receiving endpoint to reject RTP messages from the legitimate endpoint in favor of the audio carried by the RTP messages impersonating legitimate packets.

The G.711 codec is the most commonly used codec, so we chose to concentrate first on attacking RTP media streams carrying G.711 payloads. Later generations of our tools may support additional codecs. G.711 has two flavors: u-law (pronounced mu-law ) and a-law. u-law is popular in North America and Japan, whereas a-law is popular in Europe. At the time of this writing, the tools support G.711 u-law-encoded audio.

One attack is to insert or mix in new audio into an active conversation. The idea here is that one or both parties hear noise, words, or some other sound. Inserting audio causes the real audio to be overwritten. Mixing audio causes the new sounds to be added or merged in. If the new sound has a low volume, the listener will interpret it to be background noise. Figure 13-7 illustrates this attack. 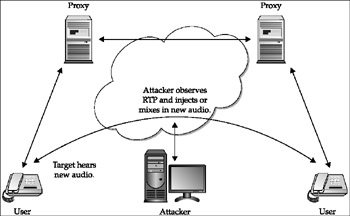 The tool we developed to demonstrate this attack is described next .

The rtpinsertsound and rtpmixsound are Linux-based command-line tools. The usage information for the two tools is the same:

The rtpinsertsound tool inserts / replaces RTP audio messages representing the playback of the prerecorded bogus audio into the target audio stream. The rtpmixsound tool also inserts/replaces RTP audio messages into the target audio stream, but each message is the real-time mixture of the most recently received legitimate RTP message's audio payload and the next bogus prerecorded RTP message's audio payload.

The sound (in other words, the audio) to insert or mix into an audio stream must be in a .wav (WAVE) or tcpdump-formatted file specified to a tool on its command line, as shown previously. We performed tests using a variety of .wav files we pulled off the Internet. The tcpdump file must be composed of sequential RTP/UDP/IP/Ethernet messages, where the RTP payloads are encoded using the G.711 u-law codec (PCMU). For our tests, we produced these sound files using the Asterisk open -source IP PBX. We wrote Asterisk "call files" to call a VoIP phone and play back the content of the .wav or .gsm file specified by the call file. We then used Wireshark to observe that the audio session negotiation resulted in the G.711 u-law codec being selected for transmission of audio from the Asterisk IP PBX to the VoIP phone, and we captured those RTP packets using Wireshark. You can use Wireshark post-capture filtering to display only the downstream (in other words, Asterisk IP PBX to VoIP phone) RTP packets. You then have the option of saving to a tcpdump file only the displayed packets.

Each tool reads the prerecorded audio from the file specified on its command line into memory before attempting to insert or mix that prerecorded audio into the targeted audio stream. For a tcpdump file, the Ethernet, IP, and UDP layer protocol headers are stripped off each packet as it is loaded into memory. Each tool enforces an arbitrary limit of 30 seconds of prerecorded audio. Audio in excess of a 30-second playback limit is ignored. A G.711 u-law codec audio stream of 30 seconds consumes approximately 252KB of memory (30 sec * 50 RTP messages/sec * 172 bytes/message = 258,000 bytes)a modest amount by today's standard. The prerecorded audio is memory resident to avoid the delays that might otherwise be required to obtain it from a mechanical medium in real-time while the tool attempts to mix or insert it into the target audio stream.

Each tool requires the ability to monitor the call to be attacked . This is necessary to spoof the inserted or mixed audio. Because neither tool presumes an MITM position, it's assumed that the receiving VoIP endpoint is going to receive the legitimate audio stream and the bogus audio stream. This represents twice the number of audio packets the receiving endpoint expects. Both tools employ several techniques to trick the receiving VoIP endpoint into using the bogus audio, rather than the legitimate audio:

The reception of a (presumably) legitimate audio packet from the transmitting VoIP endpoint drives the tool to output the next bogus RTP message based on its prerecorded, memory resident audio. In the case of the rtpmixsound tool, the prerecorded audio is converted from 8-bit, nonlinear G.711 PCMU to 16-bit linear PCM when it is loaded into memory. A G.711 u-law datum can't be added directly to another G.711 u-law datum (well, you can, but you won't achieve the desired result). Each 8-bit, nonlinear G.711 ulaw audio byte in the incoming RTP payload must first be converted to a 16-bit linear PCM value, and then added to the corresponding 16-bit linear PCM value of the prerecorded, preconverted audio, and finally transformed back into an 8-bit, G.711 u-law datum.

To use either tool, you first need access to the network segment where the call is being transmitted. For the following example, we called extension 3000 from extension 3500. As the call was being set up, we used Wireshark to monitor the signaling to gather UDP ports. We, of course, knew the IP addresses. An example of where to find the UDP ports in the SIP INVITE and OK requests is as follows :

Note that the tools work equally well in non-SIP environment. We tested them with both Cisco SCCP and Avaya H.323 IP phones. Of course in these environments, you will have to look at different messages to identify the media ports. Another easy way to get the ports is to use Wireshark to look at the actual RTP streams. Each RTP packet is built on top of UDP and IP, so you can collect the IP addresses and ports from packets flowing in the direction you want to attack. Remember that the tool inserts/ mixes audio in only one direction.

An example command invocation for this attack is as follows:

These tools enable many types of attacks. All of them follow the same basic format, but with different audio to be inserted or mixed in. A few examples that come to mind include the following:

Because you are observing the target RTP stream, you can also listen to it and "time" execution of the command. In other words, you can listen and wait for the right time and then run a command that inserts a word or phrase at an exact moment. The tool runs and starts up quickly enough to allow this. Keep in mind that you can run multiple copies of these tools, so if you have access to a portion of the network carrying many calls, you can affect any and all of them. This includes calls being transmitted to the media gateway and over the wide area network (WAN).

Impact and Probability of Occurrence

These attacks can irritate, insult, and confuse the target. Certain attacks could seriously undermine the credibility of individuals or enterprises . Attacks that add noise could make users think the VoIP system is not performing well.

These attacks target RTP, which is used in virtually all VoIP environments, including those using proprietary signaling protocols. For these attacks to take place, the attacker needs access to your internal network. These attacks are also possible from an external network if you send RTP over the Internet or some other public voice network.

You can employ several countermeasures to address these RTP manipulation attacks. These are described next.

You can stop RTP manipulation attacks to some degree by encrypting the audio. If the audio is encrypted, it is impossible to read in the audio and mix in new sounds. You can insert new audio, but even if the target can be tricked into accepting it, it will sound like noise when you decrypt it. Even this would only be possible if the RTP packets are not authenticated. Most enterprise-class VoIP products offer RTP encryption as an option. Unfortunately, it is still rarely used.

Secure RTP (SRTP), http://www.ietf.org/rfc/rfc3711.txt, is a standard providing encryption and authentication of RTP (and RTCP). SRTP provides strong encryption for privacy ( prevents mixing) and optional authentication that allows endpoints to differentiate legitimate from bogus RTP packets. A substantial number of vendors support SRTP as an option, but again, it is rarely implemented. ZRTP, promoted by Phil Zimmermann of PGP fame, is another option for encrypting RTP streams.

Countermeasurs Use VLANs to Separate Voice and Data

Most enterprise-class SIP systems use VLANs to separate voice and data. While VLANs are designed primarily to assist with performance, they also provide a layer of separation and security. With VLANs and properly configured LAN switches, you can make it more difficult for a PC to monitor and insert bogus RTP packets.

The use of softphones on PCs can defeat the use of VLANs as a security measure. When a softphone is used, RTP packets, presumably from the softphone, must be accepted by the network.

The rtpinsertsound and rtpmixsound tools support VLANs. If compiled to do so, they will write packets with the correct VLAN and QoS values.