This section guides you through two example applications: SimpleGrid and MarkableGrid. SimpleGrid covers the basics of using grids. Specifically, it shows you how to define a grid using resources, create a concrete grid class, and then draw the grid. MarkableGrid looks at markable grids, which are used much as markable lists are. It covers creating a markable grid, setting the icons for a markable grid, and drawing the grid.

As in the Using Vertical Lists section, each of the grid examples employs a very simple user interface, with each example incrementally building on the previous example. This section will only discuss features in the code that are new to each example. Similarly, many aspects of the code are the same as those in the vertical list examples discussed in the Using Vertical Lists section of this chapter ” duplicated code is not discussed here.

The example SimpleGrid displays a number of card games that a player can choose from, as shown in Figure 7-22. Each item represents one game and consists of an icon and a caption. Selecting an item starts the selected game. As this is not a full application, no code is included to actually play the game ”instead an empty method is called ( PlaySelectedGame() ). 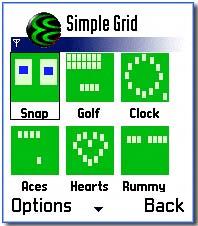 You define the grid in a GRID resource, as shown in SimpleGrid.rss for the SimpleGrid example:


The flags field determines the type of grid, in this case a selection grid. (Refer back to Table 7-4 for other options.) The array_id field refers to an array of LBUF strings, which defines the items contained in the grid. As usual, you should localize the text for the items in an appropriate resource file. Each grid item comprises of a number of fields separated by a tab character ( \t ) ”for example:


As with lists, the number indicates an icon in the icon array. However, the tab character only separates the fields rather than indicating their position in the grid cell . You will see how the position is determined shortly when subcells are discussed. See Adding Icons to a List and the SimpleList example in the Using Vertical Lists section for details on setting the icon array.

Series 60 ignores the height and width flags in the GRID resource, but these values can be specified in the GRID_STYLE resource. The emptytext field can be overridden to supply a string which displays when the grid is empty. You should not change the version field.

The style value refers to a GRID_STYLE resource:

In this case, primaryscroll and secondaryscroll are set to EAknGridFollowsItemsAndLoops . This flag means that as you scroll in one direction, the focus moves from one item to the next until you reach the end of the row or column. At this point, if you scroll in the same direction again, it will either: loop round to the other end of the same row or column, or snake to the other end of the next row or column. Whether it loops or snakes depends on the orientation of the grid. When scrolling in the same plane as the orientation ”for example, scrolling to the right in a horizontally oriented grid ”it will snake. When scrolling in the other plane ”for example, scrolling down in a horizontally oriented grid ”it will loop.

Figure 7-23. Horizontal scrolling to right with loop in a horizontally oriented grid.

If you are scrolling down in a horizontally oriented grid and the focus reaches the last item in the column, then, if you scroll down again, the focus will move to the first item in the same column. Table 7-8 provides the details of possible types of scrolling.


The gapwidth and gapheight fields determine the amount of space between each cell in pixels.


The height and width fields determine the size of each cell in pixels. You set the size according to the exact layout you require. For SimpleGrid , a 50 by 50-pixel bitmap was created for the icons; the graphics should appear above the text and take up approximately 18 pixels. A width of 50 and a height of 68 were therefore set.

Possible values of flags , primaryscroll and secondaryscroll are provided in Table 7-8 .

You will need to implement your grid as a class derived from CAknGrid . In the SimpleGrid example, the grid class is CSimpleGridGrid . This is contained within a standard Symbian OS container CSimpleGridContainer . The code for the AppUi and Container will not be analyzed in depth here, as there is little difference between it and the code in the vertical list examples. There are, however, a few points worthy of note:

The grid needs to construct itself from resource, set up its icons and then display itself. This is performed in CSimpleGridGamesGrid::ConstructL() , which is called from the container. The container passes the resources for the icon file name (R_ICON_FILE_NAME) and the grid (R_SIMPLEGRID_GAMES_GRID) , which was defined previously in Defining a Grid Using Resources .


The base class has a ConstructFromResourceL() method, which you should call with a resource reader created using the GRID resource. Once constructed, you can set up the icons for the grid. This is performed by calling the SetupGridIconsL() method. Apart from the difference in the actual icons, the code for adding icons is the same as for lists. See the SimpleList example in the Using Vertical Lists section for details of how to add icons.


The last thing you need to do is draw the grid. You do this by overriding its SizeChanged() method.


You should call the base class SizeChanged() method, so that you retain important functionality in your overridden method. Then you set up the cell layout using a number of static methods defined in AknListBoxLayouts .

The default foreground and background colors are set using the SetupStandardGrid() method. You can determine how the graphics and text will appear in each cell by setting up the subcells using SetupFormGfxCell() for the graphics subcell and SetupFormTextCell() for the text subcell. Each method has an index parameter, which refers to the position in the item strings of the graphic or text. All item strings used here are of the form " n\tText ", where n is an icon number and Text is the text that will appear beneath that icon. Therefore, the index provided for the graphics subcell is 0 (the first position in the string), and the index for the text subcell is 1 (second position). When setting up the graphics subcell you must provide the following parameters:

When setting up the text subcell you must provide the following parameters:

The MarkableGrid example displays a list of saved games. Each list item has an icon representing the game, and a single line of text representing the name, as shown in Figure 7-24. When you select an item from the list, a tick appears beneath it. You can delete marked items by selecting Delete from the Options menu. 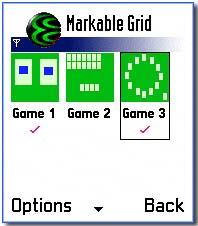 You need to define a grid resource and set the flags to EAknListBoxMarkableGrid to indicate a markable grid. The item strings will need to include the unmarked icon. For example:

You will need two additional icons, to denote the marked and unmarked states, which you should add to the icon array.

As in the SimpleGrid example, you set the layout of the grid in the SizeChanged() method. This time, you need to change the layout of the cells to accommodate the marking item. You will need to adjust height, width, start and end positions accordingly , and you can add another graphics subcell, by calling SetupFormGfxCell() . Then you need to call methods on the item drawer to allow marking to occur. In MarkableList these steps are performed in CMarkableGridGamesGrid::SetupGrid() :


The SetItemMarkPosition() method sets the position in the item string of the unmarked item.

When an item is marked, the framework alters the item string such that the marking icon number replaces the nonmarking icon number. In the MarkableGrid example, "2\tGame 1\t1" would become "2\tGame 1\t0" when marked. You use the SetItemMarkReplacement() method to specify what replaces the unmarked icon in the string. This is a descriptor, which you should define in a resource file and set to the position of the marking icon in the icon array (in this case "0" ).

Finally, you should call SetItemMarkReverse() . This determines whether the icon replacement occurs when an item is marked or unmarked. Setting it to Etrue ensures that the marking icon will appear when the item is marked.