Key features of Series 60 Platform are the large color screen (current minimum specification is 176 by 208 pixels, and at least 4096 colors, 64K colors in Series 60 2.x) and various interaction modes (two soft keys, five-way navigator and a number of other dedicated keys).

Though the display resolution is currently 176 by 208, the future will bring new resolutions . It is therefore highly recommended that developers write applications in a resolution-neutral way now, to increase compatibility and ease future porting. Essentially this means getting the screen size and calculating positioning at runtime rather than using fixed coordinates. These hardware features are also current requirements for any manufacturer considering using this platform, thereby providing common features that a software developer can depend upon.

A primary UI design objective was operation using only one hand. This has important implications, as it provides convenience for users on the move. A few exceptions exist for functions that are targeted to power users and require pressing two keys simultaneously , for example selecting text to copy and paste.

Since single applications fill the available screen, an application switcher is available via a long press of the menu button ”this greatly enhances productive use of the device. Any user with experience of mobile phones will grasp the workings of this intuitive UI very quickly.

Series 60 UI is intended for use in higher-end mobile phones that feature Personal Information Management (PIM) and multimedia applications such as:

Many applications are supplied and some have ready-made views available to application developers ”for example, the Contacts (Phonebook) application can be called on to display a list of contacts for selection, as illustrated in Figure I-3.

Figure I-3. Use of application views.

Series 60 UI may not be an optimal user interface for very basic phones today, but end-user expectations, even for a basic phone, are increasing. All basic phone functions can be performed with it, but the capabilities of Series 60 UI would probably not be fully used today.

Figure I-4. Applications in a grid view. 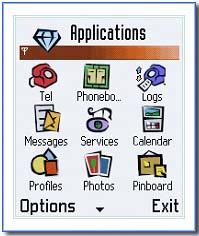 Diversification between handset designs and capabilities has greatly increased. The result is minimal similarity amongst competitive devices in terms of screen size, keypad, browser and other elements of the user interface. Applications, services and other content have to be adapted to these different devices. Series 60 is designed to limit device differentiation to vital elements such as user needs.

Nokia has made Series 60 available for licensing by other handset manufacturers, enabling them to bring phones to market with equivalent and compatible functionality. Common screen size, input methods , APIs, UI libraries and supported technologies allow services and applications to interoperate seamlessly, but still give licensees the freedom to design innovative smartphones.

Standardization and licensing of Series 60 to other handset manufacturers provides an excellent opportunity for third-party developers. They can reach a very much larger market, consisting of users with a variety of handsets ” devices that may be differentiated as products in many exciting respects, but are uniform from a software-development -platform point of view. Software developed for one Series 60 based device will function with little or no change on devices from any other handset manufacturer, providing the version of the platform is the same or is defined to be backward compatible with an earlier version. Developers do need to take care to only use public documented Series 60 Platform APIs. Using licensee-specific API additions, unless done with care, may limit the potential addressable market.

Benefits for Series 60 developers include:

Series 60 UI has specific requirements concerning hardware. The following lists the assumed hardware specification for the first product implementations ; it is possible to extend and modify the hardware to some extent for subsequent generations of Series 60 Platform.

Specifications for the current Series 60 UI display (see Figure I-5) are as follows : 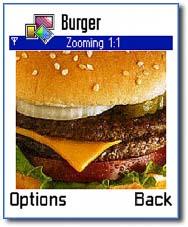 (Note that these specifications are likely to change in future releases of the platform.)

A minimum number of keys events are required for Series 60 UI and they are all illustrated in Figure I-6.

A smartphone is primarily a mobile phone, a fact reflected in optimization of the user interface for one-handed operation. But a smartphone is also a handheld device for diverse applications and data communication. Fitting these requirements together into a graphical user interface that anyone who can use a mobile phone can master ”this distinguishes a smartphone from other handheld devices. This is a crucial distinction when compared to PDAs (Personal Digital Assistants) that require a pen or a keyboard and the use of both hands to operate .

The user interface design of an application for Series 60 typically starts with dividing the structure into browsing elements and detailed views. For example, the browsing view allows the user to select one entry from a list of elements. When the user activates an entry, the respective detailed view displays the data. A wide selection of user interface elements is available for developers, ranging from list boxes, standard dialogs, pop-up menus , check boxes, and radio buttons to rich text and color graphics.

While key elements of the UI are mandated to ensure service and application compatibility, there are still numerous possibilities for customization, so that manufacturers can continue to use the different elements that have contributed to their own branding and success. It is possible for terminal vendors to make significant customizations to the Series 60 user interface in order to ensure their own distinct look and feel. However, developers can rely on programming interfaces remaining the same, even when a manufacturer has customized the UI.

Though such customization has always been possible, Series 60 2.0 introduces direct support for "themes," allowing the device to be customized much more easily. Themes or "skins" may be built into the ROM image by the terminal manufacturer or service provider, or can be downloaded or provided via .sis file. End users may now also change embedded or preset themes via the Themes application to their personal preference.

Terminal manufacturers can do the following customizations without breaking Series 60 compatibility criteria:

Nokia has produced various style guides for Series 60 UI development, games developers and even for specific products, such as the Nokia OK guide for the 7650. These are typically included in the SDKs ”see the References section for details. Terminal manufacturers are very likely to make customizations to their own implementations of Series 60 and therefore may also produce specific style guides for developers working with their products. It is very important to follow closely the general Series 60 style guide and any manufacturer-specific guide; applications will then feel familiar to the user, and this is likely to enhance the sales of your products.