8.2 How to start and stop the server

8.2 How to start and stop the server

Here we discuss the various ways you can start and stop the Domino Server. These choices are similar to those offered by the other platforms that Domino runs on, so most Domino Administrators will be familiar with the concepts and tools available.

To manually start the Domino Controller, you first have to login to Linux with the Domino user ID. After verifying that you are in the notesdata directory, use the same command you use to start the Domino server but append the -jc parameter.

When you run a Domino Controller, you no longer have access to the traditional console at the server. You can communicate only through the Domino Console or through a console in the Domino Administrator or Web Administrator.

As the Controller and Server are started, note that the kernel settings required by the Domino Server are correct. If these values were not tuned properly, the display will remind you of the recommendation and what is currently set.

In our testing, when we started the Domino Controller on Linux running as a guest on VM, we received errors that a DISPLAY variable was not set to allow the Domino Console to receive output, as shown in Example 8-1.

Since there is no native GUI on zSeries, we got the DISPLAY error, but it only affects the redirect of the Domino Console. The Domino Controller and Server have been started successfully.

The DISPLAY errors were eliminated when we installed the Xlib on Linux and started an Xterm session and redirected the DISPLAY variable to point to a machine running an Xsession. However, the Xlib package on United Linux 1.0 is not installed by default. So you will need to plan for additional disk space to install it. We also observed a slower response to commands issue on the Domino console when it was configured in this way.

There are two optional arguments, -c and -s, you can specify when you start the server.

You may be wondering under what scenarios these options may be used.

8.2.3 Starting and stopping the Domino Console

To start the Domino Console: 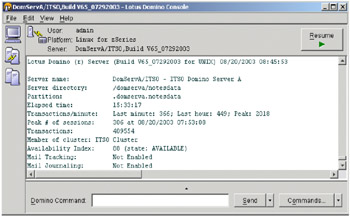 In order to use the Domino Console to communicate with a Domino server, the server must be running under a Domino Controller. 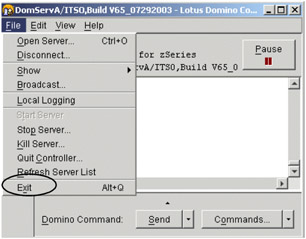 8.2.4 Stopping and starting the server from the Domino Console

There may be times when an Administrator might want to shut down Domino for various reasonlessly as maintenance, upgrades, and backups, and so on.

The way to stop the server gracefully from the Domino Console is to select from the menu File → Stop Server, as shown in Figure 8-5. 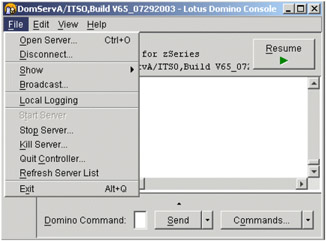 When you are ready to start Domino again, select File → Start Server.

When you start the server using the Domino Controller, by default it automatically logs server output to log files on the server with the file name dcntrlr<creationdate>.log (for example, dcntrlr08141345.log). These log files contain the normal information you see at a server console.

By default, the Controller creates and logs server output to a new log file every seven days. You can change the number of days you want to keep your log with the Set ControllerLogExpiration=days setting.

If your log files are getting very big and you want to control the size of your logs, you should reduce the number of days. This change will take effect when you restart the Domino Controller or at midnight. You can also change the name and specify a different path for your log files.

However, you cannot customize the creation date, or the extension portions of log file names. These can be set using the Controller command # set setting, where setting is the name and value of the log setting. The various settings available are shown in Table 8-1.

On the server you will find the dcontroller.ini file (see Example 8-2 on page 178) in the server's data directory. You can edit these settings directly in this file. Most changes will take effect at midnight, or when you restart the Domino Controller.

8.2.6 Other uses of Domino Console

In addition to starting and stopping the server, the Domino Console has other uses, as described in this section.

You can use the Domino Console to send one or more commands to a server or group of servers at specified intervals by using the Edit -> Periodic Commands option. This provides the capability to quickly and easily set up one or several commands on your servers.

For example, we wanted to check the status of certain tasks, such as AMgr and Indexer, every 10 minutes. We created a periodic command to issue show tasks time on DomServA at ten-minute intervals, as shown in Figure 8-6. It also shows setting and enabling periodic commands on various servers.

You can also use the Domino console to send commands to the Controller or to issue shell commands.

To send a controller command, use the prefix #.

For example, Figure 8-7 shows the tasks currently running on the Domino Server after issuing the controller command #show Processes. 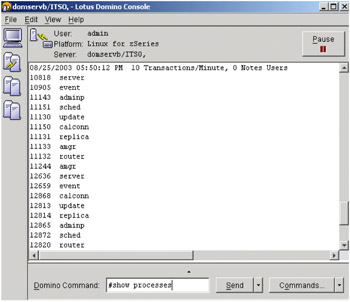 Figure 8-7: The show processes controller command from the Domino Console

Table 8-2 shows some of the controller commands available. For a more complete listing, refer to the Domino Console Help function.

You can also send shell commands to a controller from a remote Domino Console. To send a shell command, use the prefix $ to distinguish it from a Domino server command. For example:

Shell commands are executed in the server's data directory under the operating system permissions of the administrator who started the Domino server.

Select the server, then select Edit -> Local Logging to specify the local logging parameters. After you have specified the PATH and file name and type of file you wish to create (sequential or circular), then you must select File -> Local Logging to enable this feature.

In Domino 6, the access rights to the servers are defined differently. There are now seven different levels of access, ranging from full access to view-only capability. So you will need toplan carefully which access to assign to different users. The various access levels, and the Domino Controller or Domino Console commands they can issue, are listed in Table 8-3.

Full Access Administrators - new with Domino 6, and the highest level of administrative access to the server, gets all rights and privileges of all administration access levels listed. This level should be granted to only a few users, typically your most experienced administrators.

The full access administrator feature also replaces the need to run a Notes client locally on a server. It resolves access control problems-for example, those caused when the only managers of a database ACL have left an organization.

Database Administrators - responsible for administering databases on the server.

Full Remote Console Administrators - use the remote console to issue commands to the server.

View-only Administrators - can use the remote console to issue only those commands that provide system status information, such as SHOW TASKS and SHOW SERVER. However, at this access level, one cannot issue commands that affect the server's operation. As an example, there may a junior administrator who would be allowed to "view-only" to monitor the system and issue only a subset of commands.

System Administrators - allowed to issue a full range of operating system commands to the server.

Restricted System Administrators - allowed to issue only the operating system commands that are listed in the Restricted System Commands field shown in Figure 8-8 on page 182. For instance, commands such as ls or vi -R can be allowed to view files, but do not allow "rm" to actually delete files. 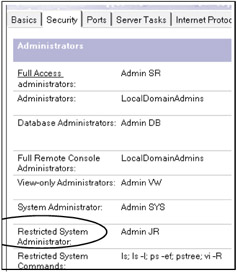 Therefore, depending on the needs in your organization, an administrator can assign the privileges required by individuals accessing the system. Each access level is fully explained in Lotus Domino 6 Administration Help database.