Word processing, as we mentioned earlier, is a very common task, perhaps the most common task performed on a PC. At some point, virtually every computer user will need to do some type of word processing. For a home user this might mean writing a letter or composing a school report. For the business PC user this can mean creating business reports, keeping records, or generating memos. When you need to generate some type of text, of course you can use the limited capabilities of a standard text editor such as Microsoft’s Notepad or WordPad, or perhaps the KWrite and Kate that come with KDE. We spent some time earlier in this book examining these text editors, and you should be basically competent with them by this point in the book. However, most people eventually find these applications to be inadequate and want something more. For most Windows users, that usually means using Microsoft Word. There are other word processors for Windows, such as Corel’s WordPerfect, but most Windows users are familiar with Microsoft Word. You can see the familiar Microsoft Word interface in Figure 8.1. 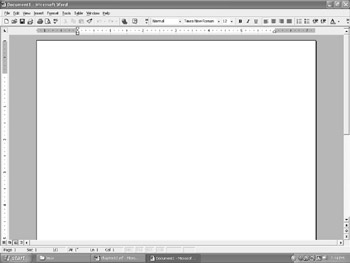 The chances are, even if you are only a novice Windows user, that you are probably familiar with the basics of Word. Even beginners usually have at least a cursory understanding of the essential toolbar functions found in Word. Right on the toolbar you can see buttons for saving, printing, changing the font, and aligning your text. In fact, you would have quite a time finding any word processor that did not have a toolbar that was very similar to this one. If you have used Microsoft Word at all, you are probably aware of the plethora of other functions available to you from the various drop-down menus. This chapter is aimed at making you just as familiar and comfortable with Open Office’s Writer program. It is a full-fledged and functional word processor.

As you progress through the material in this chapter, you will find that Writer has most of the features you are used to in Word. What makes the transition even easier is that many of these functions are found in the similar locations, with similar looking buttons to access them. This should come as no surprise. Both Open Office Writer and Microsoft Word are trying to accomplish the same goal, that of word processing, so it is no wonder that their functionality is quite similar. You will, however, find some instances where one word processor possesses some advantage over the other. Of course the primary advantage for Open Office will be price. It is a free download from www.openoffice.org. Perhaps more importantly, there are versions for both Linux and Microsoft Windows. That means that if you become enamored with Open Office on your Linux machine, you can also use the exact same product with a Windows machine!