Getting Around in GNOME

The first objective we must achieve is to help you get acclimated to GNOME. Before you can start using GNOME applications, you need to get used to moving around in the GNOME interface. You will need to know where to find things before you will be able to effectively use GNOME. Fortunately, the GNOME layout is not radically different from KDE, and by this point in this book, you should be comfortable with KDE. When you first launch GNOME, you will see a screen much like the one shown in Figure 7.1. 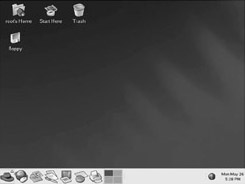 As you can see, it is very similar to the KDE screen, and in fact it is almost identical. You also will find that the Start menu has almost identical options to those you saw in KDE. Still, there are several differences. The first is in some of the applications that ship with the interface. There are some applications that ship with KDE that do not ship with GNOME, and vice versa. For example, if you use Red Hat and KDE, then you have access to Image Magick. If you use Red Hat and GNOME, you do not. However, GNOME ships with Eye of GNOME Image Viewer, which KDE does not have. Both interfaces, however, ship with Gimp, which we will be exploring in some detail later in this book. You will probably also notice as you proceed through this book that when you install both GNOME and KDE, as we did in Chapter 2, you find applications mingled. If a KDE application can run in GNOME, and you have both GNOME and KDE installed, then you will see that KDE application when you run GNOME. The reverse is also true. If you have an application designed for GNOME, and both GNOME and KDE are installed, you will see that GNOME application even when you are using KDE.

Another difference between the two desktop environments is in how the interface itself behaves. With KDE, the Print Screen button on the keyboard does nothing. With GNOME, it works; in fact, it works better than it does in Windows. In Windows, the Print Scrn button simply copies the current screen to the Clipboard. You then would have to open some graphics program, such as Microsoft Paint, and paste that image into it before you could save it, alter it, or work with it in any way. With GNOME, when you click the Print Screen button, a small graphics program is launched containing the current screen.

You should be thrilled to know that the default Web browser and e-mail client in GNOME are the same as the ones in KDE. Mozilla is the default Web browser, and Evolution is the default e-mail client. There is absolutely no difference in how Mozilla works in KDE and how it works in GNOME. Incidentally, you also can get Mozilla for Windows; just go to www.mozilla.org. That allows you to use the same type of Web browser in GNOME, KDE, and Windows. This is probably more convenient than trying to keep current with two or more Web browsers. In a later chapter, we will look carefully at the things you can do with Mozilla. There are other applications available with GNOME. For example, GNOME also has a Web browser called Galleon, as well as an e-mail client named Balsa. But it still has Mozilla and Evolution, which you learned to use with KDE, so you may choose to continue to use those applications.

All the basic groups you found in KDE are still here in GNOME. You have Accessories, Games, Graphics, Internet, Office, Preferences, Programming, Sound and Video, System Settings, and System Tools. Many of the same applications and utilities are found in these groups. In short, if you are comfortable with KDE, you should be able to move around in GNOME without much difficulty. However, there are a few key differences, especially in regard to certain utilities or programs that exist with one interface but not the other. In this chapter we will look at some of these.