If you followed the instructions in Chapter 2, “Installing Linux,” chances are that you are working from within the KDE desktop. If you are not in KDE, or are not sure, when you first boot up and go to the login screen, there are several words at the bottom, such as system. If you click on these you will see that they have menus. You can go to the system menu and select the desktop environment you want to use. If you followed the instructions in Chapter 2, you will have other desktop options, such as GNOME. You should select the KDE environment. Throughout most of this book, we will be working with the KDE environment.

Before we begin exploring desktops and shells, it would be prudent to get a firm grasp of exactly what a shell is and what a desktop environment is. A desktop environment is simply a graphical environment such as Windows. This means that your interaction with the computer is done via a graphical interface. You push buttons, click drop-down menus, and do most of your maneuvering with a mouse or a similar pointing device. It may not have ever occurred to you that there are other ways to interact with your computer. For most PC users, the graphical Windows interface is the only thing they have known since the early 1990s.

Even after the discovery of alternative means of interacting with a computer, most people prefer the graphical environment because it is more intuitive and user friendly. Early versions of Linux suffered from a lack of a graphical interface. Fortunately, that is no longer the case. In Linux you now have several desktop environments to choose from. We will delve into desktops later in this chapter, and much of this book will concern itself with using desktop environments and some of the applications you can run in the Linux desktop environment.

However, there are interesting and useful features in each of the various shells that are unique to that shell. One useful feature that is common to all shells is that you can write scripts in them. A script is a short program that executes one or more tasks. In Windows you can write batch files for the DOS or command prompt, but there is a limited number of functions you can write into a batch file. The term batch file stems from the fact that it is a batch of commands being executed in sequence. Linux and Unix administrators write scripts to automate repetitive tasks. With a Linux script, you can write either a simple script, quite similar to a DOS batch file, or a fairly complex script that is essentially a program. These scripts have all the options that most programming languages do. We will be writing some scripts in a later chapter, in the final section of this book.

There are multiple shells you can use, each with specific advantages. One of the oldest is the Bourne shell. This was followed by an updated version called the Bourne-again shell (often simply called bash). The bash shell is the default used in Linux. There are other shells, each with its own advantages and disadvantages. The most commonly used shells are summarized in Table 3.1.

The list of shells in Table 3.1 is not exhaustive. These are the most commonly used shells, and any Linux enthusiast should at least be aware of their existence. In this book we will use the bash shell because it is the most commonly used Linux shell. Remember, however, that most of the basic commands and simple scripts work the same in all shells. It is only the more advanced techniques that are specific to certain shells. That means that what you learn about bash in this book can be applied to the other shells.

Assuming your machine starts up with a graphical interface, you will have to start your shell manually. Before you can start working with shell commands, you must first start up a shell. At the bottom-left corner of your screen you should see a Red Hat icon. 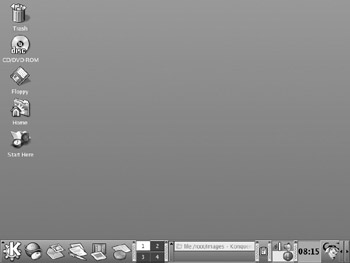 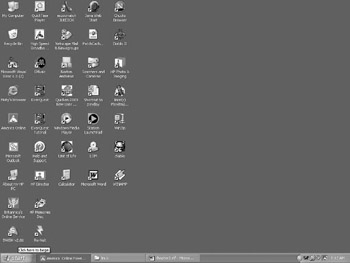 You can see that the menus are very similar. This should give you some level of comfort. The KDE interface is not that different from Windows, and you should be able to get comfortable with the KDE interface in a short time. We will go into more depth on how to maneuver in KDE later in this chapter. For now we just want to find the shell. Click once on the Red Hat icon and then move up the options until you see System Tools. If you let your mouse hover over this for a second or two, you will see suboptions that are part of the System Tools group. One of these options is labeled Terminal. By clicking on Terminal, you will launch a shell. It should look much like what you see in Figure 3.3. 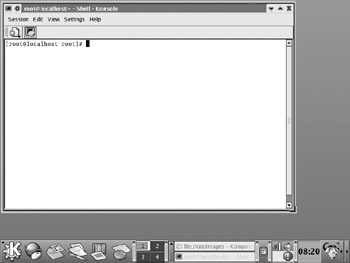 As you can see, this looks a lot like a command prompt in Windows 2000 or Windows XP, or like a DOS prompt from Windows 95/98. This is to be expected, since a shell is basically a command-line interface. The next section will take you on a tour of some shell basics.