Now that we understand the different kinds of bugs and have looked at some of the most common syntax problems in JavaScript, let’s move on to look at some techniques for finding bugs.

You’ve already seen how the syntax error message displays work in Internet Explorer and Netscape. I won’t go over that ground again. But sometimes it’s useful to create your own error messages to use for diagnostic purposes. These error messages can also display the value of variables at specific times. This can be particularly helpful in pinpointing logical errors.

I’ll show you two techniques for displaying error messages that include the values of variables, and then I’ll move on to a discussion of program testing.

The lowly alert statement can be your biggest ally in debugging a program. I find that I insert alert statements or their analog in other development environments, such as the MessageBox.Show method in Visual Basic .NET, even when sophisticated debugging tools are available.

It can be helpful to generate ad-hoc displays of variables and their values if you suspect that something is wrong. This technique is particularly useful within loops; alert statements are most often used.

You can use alert statements to display variable values in a spontaneous fashion. In other words, this is a debugging tool that’s easy to implement (and requires no special software). The only downsides are that the alert statement only provides the information you program it to display and that you may have to click OK many times to cycle through a loop. (An alert box is modal, meaning that you can’t move on until you’ve clicked OK.)

Let’s work through an example. You probably remember the code used in Chapter 9, “ Manipulating Strings,” used to count the words in a string (this was shown in Listing 9-5). Listing 10-2 shows this code again.

Now let’s intentionally mutilate the countWords function shown in Listing 10-1 so that the loop malfunctions by introducing a one-off error. If we start the loop at one rather than zero by using the iteration statement:

then the countWords function will give us the wrong result. Listing 10-3 shows the “broken” version of the code.

If you run the code shown in Listing 10-3 in an appropriate user interface and enter some words separated by spaces, you’ll see that the count of words is, indeed, one off (you can count the words entered in Figure 10-7 to verify this!). 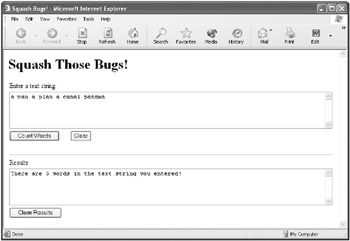 Figure 10-7: The count of words is one less than the actual number of words entered.

Adding an alert statement that displays the value of the iteration variable and the current word will immediately pinpoint the problem. Here’s how.

To Use an alert Statement to Display Values:

Displaying Values in a Window

Variety, as they say, is the spice of life. A simple variation on the alert box as a diagnostic tool is to display diagnostic messages in a separate window. It’s easy to write the values to a separate window, and this has the advantage of not interrupting execution of the code while the diagnostic statements are executed. You can read the list of values in one fell swoop.

If you entered a long sentence with many words in the previous example and then clicked through all the resulting alert boxes, you’ll understand why this can be a good idea.

To Use a Document Window to Display Values:

In addition to essentially real-time syntax error checking, most modern development environments provide tools that provide the ability to do the following:

No program is complete until it has been tested. Even the simplest programs require some ad-hoc testing: Does the program run? Does it work right with some sample inputs?

With very short, simple programs you may be able to get away with informal testing. But the more complex (and longer) your program, the more need there is for rigorous testing.

Formal testing plans require a good bit of thought about the data (or inputs) you’ll use.

Even if you don’t think you need a formal testing plan, keep the following suggestions in mind when you test your programs: