In June of 1999, Microsoft started to reevaluate how Visual Studio was being used as part of a software development process. Microsoft's Developer Division sustained the developer community at large for years, but did not adequately address all of the challenges of software development within a team environment. For example, what Microsoft tools were out there for architects before Team System? There really wasn't that much—the most notable tool is Microsoft Visio, which is used to design UML diagrams. There are also some other lesser known design tools in Visio. However, there isn't any solid twoway integration between Visio diagrams and code within Visual Studio. Another problem relates to the tools themselves. To effectively set up a software development shop, you have to purchase several third-party tools (or use open-source tools) to handle tasks such as version control and team communications. A mishmash of tools is even more difficult to integrate.

Here is a common scenario: You are compiling a list of tasks or requirements to send out to your team using products such as Microsoft Excel, Word, or Project. You then have to be able to communicate these tasks to the rest of your team and respond when they have completed the task or the status changes. To be able to achieve this, you have to do a lot of cutting and pasting. On top of that, the process is very deliberate—there is no automation or shortcuts. You also have to handle a lot of your communication by e-mail. The problem with e-mail is that your team members can lose messages; there may be a server outage that may prevent your messages from coming through, and so forth.

Before Team System, the only version control product Microsoft had to offer was Microsoft Visual SourceSafe. SourceSafe is an excellent tool for a single developer or a very small team, but it doesn't scale very well if you have a large number of developers working concurrently. In addition, it isn't really designed to be used over the Web.

Visual Studio's Enterprise Tools team launched a project code-named "Burton" to create a team product that would integrate well with Visual Studio and tackle the challenges of integration and scalability.

In May of 2004, after five years of research, planning, and development, Microsoft announced and presented Visual Studio 2005 Team System to the public. Team System consists of experience and tools used internally at Microsoft for years, such as PREfast, Product Studio, and Source Depot. Rick LaPlante (the general manager for Team System) delivered a keynote presentation and an end-to-end demo that changed the way people looked at Visual Studio. The first major change in the Visual Studio product is the availability of tools targeted at all roles within an IT organization: architects, developers, testers, and project managers. Another big focus is on the software development life cycle (also known as the SDLC). Within the product, you can now use the Microsoft Solutions Framework, which not only provides a framework for developing software, but also includes process guidance and integration.

Fast forward to today: Team System is now in stores and you've picked up a copy of this book to learn more about it. Professional Visual Studio 2005 Team System will provide you with an end-to-end overview of the important features of the product. In the Wrox spirit, we have included a lot of practical information and hands-on walk-throughs to put Team System through its paces, regardless of your role within your organization.

We will make no bones about it—Team System is a huge product. Think of this book as your starting point into Team System. Like other Professional books by Wrox, we not only dive into the important features, but also the grittier details. 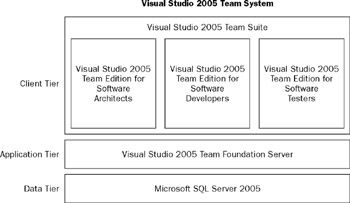 Following is a detailed explanation of each of the tiers included in Team System.

The client tier is composed of several role-based versions of Visual Studio 2005 and other tools that are designed to connect to the application and data tiers of Team System. Here is a description of the four Team System client products:

Once you are finished installing Visual Studio, you need to install the Team Explorer. Team Explorer is a client plug-in that will enable you to connect to Team Foundation Server, create projects, and administer all of the project details. Team Explorer can also be installed as a standalone tool. It has the same "look and feel" as Visual Studio, and it has a light memory footprint. Note that you can't write code within the standalone version of this tool (you still need Visual Studio to be able to do that). You can also use it for source control operations side by side with Visual Studio .NET and other development tools. It's also appropriate for project managers.

Although not officially part of Team System, Microsoft Office Professional 2003 (specifically Word and Excel), and Microsoft Project are used to interface with both the application tier and the data tier. Excel and Project can be used to manage work items and requirements; Word is used to create manual tests. Excel can be used to get a nice view of your project data by connecting directly to the data tier using pivot tables.

Chapters 1 through 17 cover most of the client-based tools. If you are interested in project management and reporting, you should definitely take a look at Chapter 19.

One of the topics we won't be covering in detail is the Team Foundation Core Services. The reason we are excluding this information is because the programmability features and API are very much in flux at the time of writing. For current documentation and samples, we highly recommend that you visit the Visual Studio Extensibility Center website at http://www.vsipdev.com.

Team System's data tier is based on Microsoft SQL Server 2005. This product was specifically selected to reduce the complexity of the application and speed up time to market. At this point, Team System is not compatible with third-party data sources and does not integrate with Enterprise Data Services (EDS). Team System's data tier is used to store all of Team System's data, such as source code, work items, reporting data, and project settings. You can find coverage on the data warehouse in Chapter 19. You can also find out about how to back up and recover your data store (and other data-related topics) in Chapter 24.