Previous page
Table of content
Next page
Patterns and Loops

You can quickly and easily sketch musical ideas in software like Kinetic and GarageBand thanks to their fluid use of pre-built, repeating musical components . You can then store, edit, and develop your sketches .


We'll look at two applications that represent simplified, "sketchpad" versions of professional workflows: Apple's GarageBand on the Mac and Cakewalk's Kinetic on Windows. Both applications are serious tools, even if they lack some of the bells and whistles of their higher-end counterparts. GarageBand uses a timeline approach, which is similar to full-blown studio Digital Audio Workstations (DAWs) like Logic, whereas Kinetic's "virtual hardware" approach reflects how DJs and remix artists work. Both programs can be integrated with pro apps if you decide you need features like score printing, surround sound, and editing features that these applications lack.

Since editable MIDI patterns and audio loops function differently, the software must provide a way of distinguishing which is which. In GarageBand, audio is blue and MIDI is green, both in tracks and in loops. As in other applications, you'll also see that the two contain different kinds of data: audio is represented as a waveform, whereas MIDI is represented as note data ( Figure 5.1 ). In Kinetic, everything is a pattern unless it's specifically labeled as an audio loop.

In the days of analog tape, the only way to adjust pitch was to raise or lower the speed at which the tape moved. Any change in speed generated a change in pitch. With digital data, it's possible to manipulate pitch and tempo independently. You can adjust MIDI data to any tempo or pitch imaginable, and thanks to digital audio processing techniques, the pitch and tempo of audio can also be modified independently, though when the changes are large you'll probably hear changes in the character of the sound.

Specialized loop formats ease the audio pitch/time-shifting process by adding meta-information to the file, in one of several standard file formats (see the sidebar "Standard Loop Formats"). By storing original tempo information and markers to locate where beats begin ( Figure 5.2 ), these formats make adjustments more musically accurate and aurally satisfying . Instead of time-stretching the entire file at once, the audio software can stretch or manipulate beats individually. You can modify the tempo or pitch of the audio without this information, but it generally requires more manual labor for the best results.

Figure 5.2. Loop formats store the location of each beat for more accurate manipulation. Your software reads this information and adjusts automatically, like the beats stored in this Apple Loop. 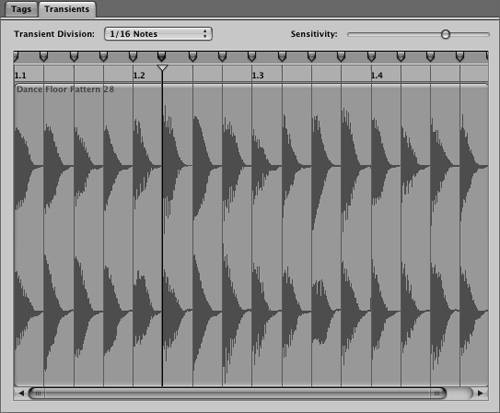 Drum machines that emulated the patterns of rock drummers were among the first commercial pattern-based hardware. Hip-hop and so-called dance music seized on the unique, mechanical sounds they provided.

People often refer to loop-based music or pattern-based editing as though they're new forms of musicoften associating them solely with dance music and electronicabut the underlying concept isn't new at all. Musical traditions of all cultures use repetition and pattern.

By carefully stitching patterns and loops together and using variation, you can create pieces that sound more organic and musicalor, if you prefer, more mechanical and odd. Either way, there are endless musical possibilities.

We'll look at two ways people most commonly use loops and patterns. The first is to create a backing track for rehearsing, songwriting , or performing, letting the loops fill in for parts you can't play. The second is to build repetitive grooves for interactive dance music. Although we'll use GarageBand for the former and Kinetic for the latter, each is capable of both activities.