One of the most fundamental aspects of knowledge of the rain attenuation characteristics is the relationship between the linear attenuation A (dB/km) and the rainfall rate R (mm/ hour ). The ITU-R model for rain attenuation intended for the forecast methods "Rec. ITU-R p. 838, 1999", recommends the following relationship:

where the coefficients k and ± are functions of the frequency. Such a relationship is interesting for its simplicity and its accuracy for the most common attenuation ranges in practical applications.

The experiment showed that the values of k and ± , recommended by the ITU-R, are respectively underestimated and overestimated above 30 GHz for the climate in the north east region of France. Other authors have already observed these results in other locations of the world. The ITU-R model tends to overestimate the rain attenuation above 50 GHz for a rainfall rate exceeding approximately 20 “25 mm/hour. 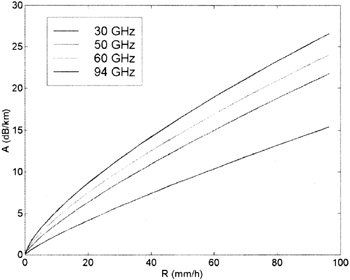 These studies represent only a sample of a number which were conducted in this domain. Thus, this vast program allowed apprehension of the complexity of the propagation phenomena in natural environments and to establish statistical distributions about the occurrence of parameters involved in propagation, as needed by the designers. These statistical studies provide reliable transmission support for high data rate systems over short radio links.