Smart devices cover a wide spectrum in hardware complexity, from passive electronic tags or minimal data-providing smart cards, through networked sensors and actuators, up to such highly sophisticated gizmos as wireless-enabled PDAs. The word "smart" does not in this context indicate autonomousness of devices in any strong sense.

A minimal, lowest -common-denominator definition of a smart device, bridging all previous complementary views, could be given as follows . A smart device is a physical object equipped with:

The latter is not mandatory as the user interface can be partially or entirely exported on a remote client or peer device, through the network connection.

In this minimal, system-theoretical view, a "smart" device:

This definition is probably too general, as it implicitly lumps together classical computers, telecommunication terminals, and the newer kind of devices on which we want to place the emphasis. A quantitative difference in the relative importance of the five components listed above can, however, make this distinction more concrete: smart networked devices are the ones for which the "sensor/actuator" and "network connection" components become critical; the user-interface may vanish altogether, whereas processor and memory do just correspond to a minimal requirement for embedded processing. In another view, this definition is too restrictive , because the low-end category of devices described below will include neither a network connection proper nor a processing unit, only a bilateral asymmetric wireless attachment such as RFID, memory and possibly sensors.

The more descriptive categorisation proposed below is probably conducive to a more intuitive and concrete understanding of the smart device concept. It will help articulate the correspondence with end-user services, illustrated afterwards in a comprehensive scenario.

These high-end devices are a short- term evolution of present-day mobile phones or network-enabled PDAs, and are the most obvious candidates for the title of ˜smart device . Yet, as will be shown, they are only the tip of the iceberg of smart devices. Their main function is that of gateway devices, mediating between a general-purpose access network such as GPRS/UMTS, and the local-area or personal-area network of smart devices, belonging to the other three categories, with which the user may wish to interact in his/her own environment. The general-purpose access network will serve for both classical communication services (e.g. videophone, video on demand) and the remote control/administration of smart devices.

These devices should not become Swiss army knifes, as their own common denominator capabilities may be augmented by those of category 2 or 3 devices for more specialised functionalities.

Their minimal required features could be the following:

These devices are directly complementary to first category devices: they serve to augment the personal communicator's general-purpose capabilities with more specialised ones, whether they are human interface [2] or physical interaction capabilities obtained through specific sensors/actuators in various physical modalities. They will be worn, (rather than carried) by the user at any given time, depending on his/her/her activity and environment. They will enrich his/her/her interfacing/interaction capabilities in this environment.

Examples for such devices are:

The minimal required generic feature for these devices is Bluetooth 802.15.x Wireless Personal Area Network interface (for interconnection with the personal communicator).

These devices are present in the user's environment at any given time, and are characteristic of the nature of this environment, whether it is e.g. a home, office, public space, industrial, or transportation environment. These devices may be movable , but are usually not mobile.

Their required features are WPAN/WLAN or Powerline network connectivity for direct or indirect interaction with the personal communicator.

Examples of such devices are the following:

The spectrum of such potential environments is illustrated below. 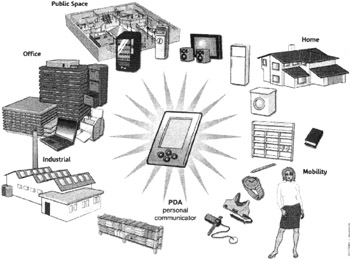 These lowly devices are not the most obvious candidates for the title of "smart" devices, yet they are the immersed part of the iceberg, quantitatively the most important category, potentially comprising up to trillions of manufactured objects annually.

These devices are not network peers. They are typically managed and interfaced through devices from previous categories acting as their network proxy and possibly physical location/identification container.

They comprise potentially all devices which may be individually locatable and identifiable .

A potential technological solution for this is RFID inductive coupling (ISO 14443). The cost of readers and tags is due to decrease further with wider-scale adoption of the technology for all kinds of devices [7].

[2] It should be borne in mind that traditional user interfaces inherited from the PC world) are poorly adapted to situations of mobility.