The new ISIS HR system is operated, managed and centrally hosted on RS-6000 servers at the Division of Administration (DOA) in Baton Rouge. Exhibit 2 illustrates the organizational structure for the DOA. The users of the system reside in approximately 764 different agency-location sites across the state. It is estimated that these 764 distinct agency-location sites are physically located in approximately 184 different building facilities throughout the state. While the scope of the project covers 100,000 classified and unclassified employees/ positions for personnel purposes, of greatest concern are the approximately 55,000 within the executive branch for whom payroll functions will be maintained.

Project management and program management are both critical components of success for an implementation and they are important to distinguish. Project management involves the day-to-day management of the project work plan and project resources to complete the project deliverables and successfully reach the project milestones. This was a particularly challenging task as, characteristic of state government, this project was quite large, touching all agencies and all employees. Program management, on the other hand, addresses different issues. First, program management is concerned with making sure that the project is set up for success: gaining executive sponsorship and selecting the right team members, for instance. Second, program management involves managing the external aspects and factors that are not within the scope of the project, but that can nonetheless affect the outcome of the project. The ISIS HR project organization included: Dr. Allen Doescher, assistant commissioner of the DOA (a breakdown of the DOA offices is provided in Exhibit 5); Mr. Whit Kling, deputy undersecretary of the DOA; and Anne Soileau, deputy director of Civil Services (the organizational structure for the Civil Services Department is illustrated in Exhibit 4).

Migrating from a Legacy System

Each of the existing legacy systems (AM45, CS02, UPS, and UPPY) were running on different platforms with different databases. This presented a conversion nightmare. The ISIS HR project utilized a five-system landscape, with development (DEV), test (QAS), training (TRN), technical sandbox (TEK) and production (PRD) systems. The five-system landscape is maintained on an IBM System 390 mainframe. The S390 is divided into six LPARs, of which three will be used for the R/3 systems. One will be used for DEV, QAS and TRN, one for PRD, and one for TEK to test upgrades, hot fixes, and patches to the operating systems or the database. (An LPAR refers to a logical partition of a mainframe processor. That is, one mainframe can be sliced into different processors and can run different systems on these different partitions.) There are a total of eight RS/6000 application servers running AIX 4.2.3. Five RS/6000s are used for the PRD environment, and one each for DEV, QAS and TRN. 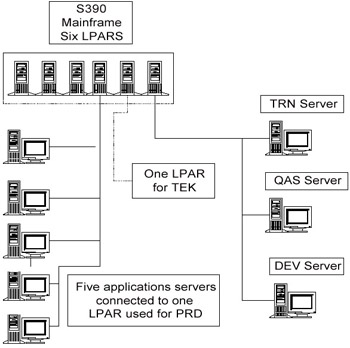