Let's begin by exploring the concepts involved with applying MVC to the web. If you've worked with WebWork or Struts or some other web MVC framework before, you will recognize many of the concepts discussed in the next few pages. However, even if the concepts are familiar, the following discussion should provide a useful insight into the rationale behind the architecture of Spring's Web MVC Framework.

The MVC architectural pattern aims to divide the layer implementing interactions with users into three different kinds of objects:

The traditional implementation of the MVC architectural pattern in GUI implementation (depicted in Figure 12-1) involves actions being taken, after which controllers update the model, with the changes being pushed back to the view, which updates itself (through for example the Observer pattern). Such an ideal implementation is not feasible for web applications because of the limitations of HTTP. Typically, a user issues a request, allowing the server to update the view, which is then sent back to the user's browser. It's impossible to propagate changes back to the client in between requests. This forces us to use an approach where instead of the model pushing changes to the view, on every request, the view pulls the relevant data from the model in order to display it in tables, lists, forms, or whatever user interface elements are required. 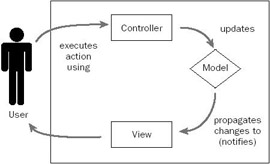 The MVC design pattern defines a clear separation between responsibilities and results in clean code. Fortunately, using a pull approach will not prevent you from using the MVC triad. It just changes the way things work a bit. So in Spring MVC you will still be able to separate logic accessing data from the data itself and the code that will render the view. The latter might be an HTML page generated by JavaServer Pages (JSP) or an Excel file generated by a class using Apache POI.

Let's now take a closer look at web applications designed using the MVC pattern. A web browser uses an HTTP request to communicate a user's action to the server. The server does some processing and generates a view, which is communicated back to the client using an HTTP response.

The MVC pattern comes into play when the HTTP request reaches the server. Based on the information carried in the HTTP request, such as the URL and any parameters, the web application should be able to execute it. When it has finished processing the user's request, possibly creating or updating a model, it will hand over responsibility to the view. The view in its turn uses the HTTP response to transmit any data back to the client, such as pages marked up using HTML or raw data representing an Excel document.

A good web framework distinguishes between dispatching the request and processing it. In other words, the dispatcher determines what controller is needed to fulfill each request while the controller does the actual processing. This separation removes the need for unnecessary processing of the HTTP request when implementing controllers, making application code cleaner and less closely coupled to HTTP. Such decoupling increases testability and may allow for greater code reusability.

Figure 12-2 illustrates how a request will be handled by a web framework using the concepts described previously. 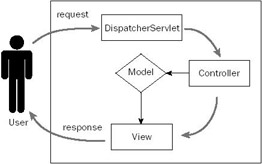 The MVC pattern applied to web applications is discussed in greater detail in Chapter 12 of Expert Oneon-One J2EE Design and Development.

Spring does not try to reinvent the wheel. It unites and integrates best practices and solutions: for example, Hibernate and iBatis, in the case of data access. However, Spring does provide its own MVC package. Given the existence of other popular MVC implementations such as Struts and WebWork, you might wonder why.

The rationale behind implementing yet another MVC implementation lies in the fact that we considered that other more traditional implementations didn't provide an elegant enough solution. Spring has clearly set a couple of goals for the MVC package (a more thorough discussion can be found in Johnson's J2EE Design and Development):

These requirements partly came out of Rod Johnson's experience architecting demanding high-end web applications from 1999 to 2001. All were practical, rather than theoretical, requirements. They have proven to recur in many user requirements we have seen since.

In the previous sections you have learned about models, views, controllers, and dispatchers. Spring provides equivalents to those that can be completely integrated with your middle-tier code using Spring's Dependency Injection features.

The components actually taking care of web-related processing (and eventually delegating tasks to your middle tier) are the controllers. Spring includes a variety of controllers, all targeted to solve specific problems in web applications such as form handling and doing wizard-style workflow. Most of the controllers Spring provides derive from the org.springframework.web.servlet.mvc.Controller interface, which specifies the following method:

A controller is responsible for handling the request through either returning a ModelAndView relevant to the request (the normal case), or returning null if the controller has dealt with the request itself: that is, has written to the ServletResponse itself — generally not considered to be a good practice, but sometimes unavoidable. Spring provides several controller implementations, many of which don't work with the HttpServletResponse object. As a developer, you probably won't ever need to work with the servlet response, as the ModelAndView gives you all the control you need. But if you ever stumble upon a situation where you need more flexibility, you can always implement the Controller interface or extend one of the controllers somewhat higher up in the hierarchy (such as AbstractController).

The ModelAndView class allows you to specify a response to the client, resulting from actions you have performed by the controller. This object holds both the view the client will be presented with as well as the model that will be used to render the view. ModelAndView objects can be created in a number of ways. The underlying structure of the model is a java.util.Map. A convenient constructor allows you to specify a model map directly, or you can construct an empty model and add objects through methods on the ModelAndView class itself:

One might ask why Spring incorporates its own ModelAndView type. Model elements are added to the map this type holds, and adding elements directly to the HttpServletRequest (as request attributes) would seem to serve the same purpose. The reason to do this is obvious when taking a look at one of the requirements we have set for the MVC framework: It should be as view-agnostic as possible, which

means we'd like to be able to incorporate view technologies not bound to the HttpServletRequest as well. This could be, for example, XSLT where the model is contained by an XML document that is to be transformed using an XSL style sheet. Testability is also slightly improved by abstracting away from the Servlet API.

Implementations of the View interface will typically evaluate a template such as a JSP or Velocity template to generate actual content, rather than doing it in their own Java code. Thus View implementations are often generic, parameterized by their use with many different templates.

Completing the Picture: The DispatcherServlet

As we've discussed the general concept of web MVC, you've heard about requests being dispatched to controllers. Typically, web frameworks implement this behavior of dispatching the HTTP request using a Front Controller Servlet. So does Spring. The main entry point for any request a user is issuing is the DispatcherServlet. This will inspect it and determine what controller it needs to execute the given request. The DispatcherServlet models the workflow involved with executing a request. It dispatches requests to controllers and takes care of rendering the response, based on the model and view information the controller returns. All this is done using a couple of other features of Spring Web MVC, which you'll learn about later on.