An important design principle for websites , Web applications, and software in general is that the less a user has to specify to get what he or she wants, the better (Johnson, 2000, Chapter 1). One specific implication of this principle is that choices in forms and control panels should have default values. The default values should be the most likely ones. This frees users from having to set everything explicitly. Instead, they can simply scan the settings, maybe change a few, and proceed.

Unfortunately, this important design principle is not widely known. Millions of websites and Web applications offer choices with no defaults or with defaults that are unlikely to be what users want.

At best, such choices force users to make explicit decisions and choices, consuming valuable time. Often, however, the result of missing defaults is that users overlook the settings, try to proceed, and then either get scolded for omitting required information (Figure 4.17) or end up with results they didn't want.

Reasons for Not Providing a Default

On the other hand, some choices offered by websites cannot offer a default value. There are two reasons why this might be so:

Despite these exceptions, most choice controls on websites should have default values. Let's look at some examples of websites that in one way or another failed to provide defaults for choices.

Radiobuttons with No Default

On the Web, one often sees radiobutton choices that start with none of the buttons selected.

Sometimes, this is simply a bug: the result of the radiobuttons having been defined incorrectly. Often, however, Web designers do this intentionally. They want to do one of the following:

The website of sporting goods retailer L.L. Bean provides examples, from two separate forms, of radiobuttons with no default value (Figure 4.18). In these cases, the lack of defaults makes sense. Defaulting either choice to one of its two values would be at least presumptuous, perhaps even illegal.

Figure 4.18: www.LLBean.com (Nov. 2000) ”Radiobuttons with no valid initial value, from two different forms at the site. In both cases, not having a default is justifiable, perhaps even required.

Look, for example, at Agilent.com . The site provides a Feedback page where visitors can comment on the website. In submitting comments, visitors have to specify whether they do or do not want a response (Figure 4.19). I repeat: "have to specify." There is simply no good reason why this choice could not default to "No, a response is not necessary."

Figure 4.19: www.Agilent.com (Jan. 2002) ”Website comment form has radiobuttons with no default value. The "No" response should be the default in this case.

Menus with No Default

Bolstering the commonness of menus with no initial value is a newly emerged Web-design idiom in which a menu's initial value is also its label or an instruction to users. For example, a menu to indicate your home state in the United States might be set to a prompt such as "Select State" or "State" (Figure 4.20[A]). This contrasts with the traditional menu design, in which a menu is set to a real value such as "Delaware," with an external label "State" (Figure 4.20[B]).

This new way of designing menus is okay as long as Web designers follow these guidelines:

If these two guidelines are not followed, the result is either menus that needlessly force users to make explicit choices instead of letting them simply accept defaults, menus that users have to pull open even just to see what the choice is, or both. Sadly, these guidelines are often not followed. Considering the millions of menus on websites worldwide, multiplied by millions of Web users, mind-boggling amounts of Web-user time is being wasted .

A good example of a website that wastes customers' time by failing to provide defaults for menus is the Stanford University Bookstore. The Shopping Cart page has a menu with a long, confusing description and "Please choose" as its initial value (Figure 4.21[A]). The menu's purpose is to allow the store to substitute used books for new books or new books for used books depending on what is in stock. Its values are "yes" or "no." Because of the verbose instruction and the menu's position on the page, it is easy to ignore. However, you can't proceed until you set it (Figure 4.21[B]). 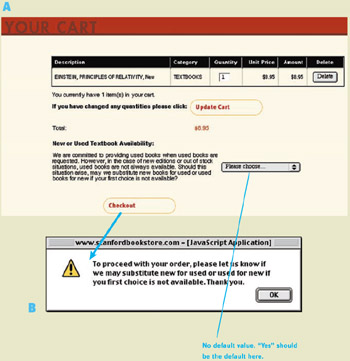 Figure 4.21: www.StanfordBookstore.com (Sept. 2002) ”Menu that should have a default value but doesn't. A ” Shopping cart page includes an easily missed menu with a long confusing description and no valid initial value. B ” Error message displayed if user clicks Checkout without setting "Please choose" menu to "yes" or "no."

A better design would (1) assign the choice control a default value that allows book substitutions, requiring customers to change the control to disallow them, and (2) make the control more prominent. In the following Avoiding the Blooper section, I offer an improved design.

At LLBean.com, an online sporting goods and clothing store, I found a more serious example of a menu lacking a valid default for no good reason. I was shopping for a backpacking tent. I found one I liked , looked at its product page (Figure 4.22), then clicked "Add to Shopping Cart." Instead of taking me to my shopping cart, the site displayed an error message: "We're sorry, more information is needed to order this item. Please complete Step 2 then continue your order." I clicked OK and went back to the product page. What had I missed? Step 2 included a Quantity field, which I had left set to the sensible default of 1, but it also included a Color /Style menu, which I had also left as it was. 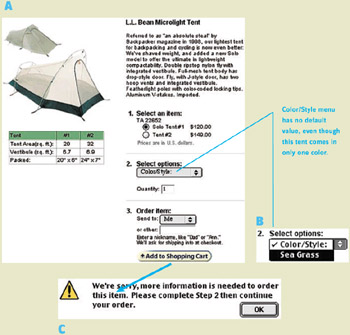 Figure 4.22: www.LLBean.com (Nov. 2000) ”Menu with no valid initial value. A ” The menu in step 2 is initialized to a label "Color/Style," not to a valid value. B ” This is true even though the product comes in only one color. (c) If customers try to proceed without setting the Color/Style menu, they get an error message.

Okay, so I had neglected to choose a color. I opened the menu and saw that the tent comes in only one color: Sea Grass.

Why didn't LLBean.com set the menu to "Sea Grass" by default? Because product pages are generated automatically from product databases, so they are designed generically rather than being carefully designed for each product. Different products have different options, so step 2 is generically labeled "Select options" rather than "Select Color." The menu choices are generated dynamically, with an initial value labeling the options for that product. This example shows that automatically generated pages, although they have economic advantages, have strong usability disadvantages, which can translate into economic disadvantages.

L.L. Bean's website also provides another instructive example. Recall the guideline: If menus are designed according to the new Web-design trend of having their initial value be a prompt, the labels ”including the prompt value ”must be carefully worded to make clear what the choice is. The menu on LLBean.com's credit card application follow the new trend, but the labels are vague: "select" (Figure 4.23). One menu is labeled "Are you:" Users have to open it to see what it sets. It could be about anything: Are you ... rich? Are you ... in prison ? Are you ... annoyed by poorly labeled menus?

Similarly, at Agilent.com , the lack of initial values in menus, combined with vague labels ”"Select" ”yields a confusing trio of menus. Do the three menus each represent a product, with product options on the menus, or does each menu represent a product category, with products on the menu? Customers can't tell. All three menus should have meaningful defaults (Figure 4.24).

In presenting and discussing examples of bloopers concerning defaults, I touched on most of the important design principles for avoiding such bloopers. I now summarize the principles.

Provide a Default Value If Possible

Make it as easy as possible for your site's users to accomplish their goals. One way to do that is to provide default values for as many data fields and choices as possible, so they can focus on just those they need to change.

A good example of providing a default comes from L.L. Bean's competitor, REI. The color choice shown in Figure 4.25 is similar to the previously discussed choice of tent color at LLBean.com , where no default is provided (Figure 4.22). Why does REI provide a default color while L.L. Bean does not? The relative popularity of the color options cannot be the reason, as L.L. Bean's tent is available in only one color. Perhaps REI's Web designers were more aware than L.L. Bean's of the value of good defaults.

However, LLBean.com does provide defaults for some choices. For example, when asking for a phone number, the site asks whether the number is a home or business phone number, with "Home" as the default (Figure 4.26).

When "None Yet" Is an Important Option, Make It Explicit and Make It the Default

Some choices have to indicate that the user has not yet selected an option. In such cases, it is recommended to make "none" an explicit value and make it the default. A course-registration form on the website of the Usability Professionals Association includes such a choice (Figure 4.27).

When No Default Can Be Assumed, Menus Are Better than Radiobuttons

Sometimes you can't provide a default value for a choice, for pragmatic or political reasons ”when asking the user's gender, for example. In such cases, it is better to use a menu than a radiobutton, because, as discussed previously, menus with no value are more natural than radiobuttons with no value. This means that in some cases, you will be using menus even though there are only a few options or even though there would be plenty of space on the page for radiobuttons.

Radiobuttons with no initial value should be avoided. At the very least, using them should require very strong justification.

Use the Web Menu Style Carefully

The new Web-design trend, in which menus contain their own prompt as a default value, works as long as Web designers follow the two design guidelines stated previously. For convenience, I provided them again here:

Some Binary Choices Are Better Expressed as Checkboxes

Menus and radiobuttons are not the only way to express choices. When a choice has two clearly opposite values, it can be represented by a checkbox. A checkbox is always either on or off, so it has a default value by definition.

Recall that the Stanford Bookstore's Shopping Cart page had a mandatory "yes/no" choice, presented in a menu initially set to the prompt "Please choose." Let's consider how a checkbox might be used to improve that design.

To improve that page, I would change several things. I would keep only the last sentence of the long instruction paragraph and make it the heading for the control. I would present the new/used substitution question as a checkbox, positioned prominently, with the simple label "Substitutions OK." The checkbox would be checked (on) by default (Figure 4.28). 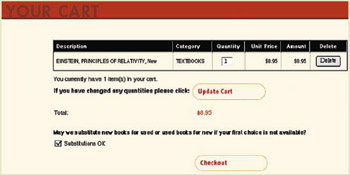 On the other hand, Web designers should be careful not to misuse checkboxes. Checkboxes should be used only for choices for which a particular attribute ”such as "italics" ”is on or off, true or false, present or absent. They should not be used for choices that have two values, such as alignment (left/right), gender (male/ female ), or color (black/white). (See Blooper 28: Checkboxes or Radiobuttons, in this chapter.)

[3] In special cases, carefully designed arrays of radiobuttons can be used to present more choices.