It is odd in some ways to be comparing Amazon and eBay. To most people, Amazon is a retailer selling products to consumers and eBay is an auction house where consumers congregate to sell to one another. However, a keen analysis reveals that these two companies are direct competitors. For instance, the only site to receive more visitors than Amazon during the 2002 holiday season was eBay. It is now well known that Amazon considers eBay to be its biggest competitor.

Amazon.com is perhaps the company that is most closely tied with the e-Commerce phenomenon. The Seattle, Washington based company has grown from a book seller to a virtual Wal-Mart of the Web selling products as diverse as music CDs, cookware, toys, games, tools and hardware. At the same time, the company now offers selling services either through auctions or by a fixed-price format. The company has also become a major provider of technology to partners such as Toys 'R Us and Target.

Amazon has grown at a tremendous rate with revenues rising from about $150 million in 1997 to $3.9 billion in 2002. However, the rise in revenue has led to a commensurate increase in operating losses. At the end of 2002, the company had a deficit (i.e., cumulative losses) in excess of $3 billion.

On the other hand, eBay has had a focused and slower growth path. The core nature of the company's business has always been auctions. Even though the company has grown rapidly, it is still a relatively small company with revenues of about $750 million.

Starting with the Initial Public Offerings (or IPOs), the stock trajectories of Amazon and eBay have provided an interesting contrast. On the first day of its IPO, Amazon's stock rose from the target price of $18 to $30. By a strange coincidence, eBay shares were also priced at $18. However, the closing price was much higher—$47.37.

Since then, the stock prices have gone in opposite directions (see Figures 1 and 2). Amazon's share price path is perhaps the biggest symbol of the rise and fall of the dotcoms. On the other hand, eBay's steady price path reflects the consistent profitability of the company. Amazon.com has never had an entire year that was profitable. It has been profitable in the fourth quarter of 2001 and 2002. The stock prices clearly reflect this. 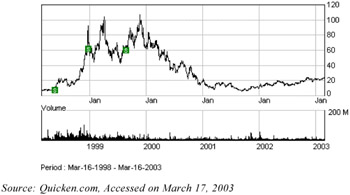 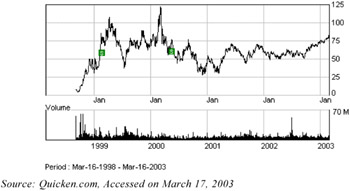 While Amazon had the glamour of growth in sales revenue, eBay was the steady plodder that nobody noticed in the initial years. Most dot-coms wanted to replicate the model of Amazon. It was very common for a dot-com start-up to proclaim that it wanted to be "the Amazon of XYZ" product category. Pets.com wanted to be the Amazon of pet food, for instance.

Fundamentally, these two companies provide us with two interesting models of how to grow a company. Bezos, the founder of Amazon, has famously argued that excessive focus on profits would detract from growth. In his view, growth must come first and profits can come later. This is an unconventional view-to say the least. Most companies take the approach eBay took which is to first build a small company that is profitable and then grow it to a larger business.

Bezos' view is that rapid growth in early years is needed to distance a company from its competitors and to ensure long-term viability. In his view, size is the ultimate security for a company. Being big is everything. On the other hand, for eBay, the focus was really on being profitable. eBay management did not care as much about becoming the largest e-commerce company. All they wanted was to be an efficient intermediary so that they could make profits. Today, eBay perhaps represents the cheapest way of selling products on the Internet.

Thus, these two stalwarts of e-commerce present us with two contrasting growth paths and track records.