A Domain Name Service (DNS) server is a flexible database of fully qualified domain names (FQDN), such as www.sybex.com , and IP addresses, such as 63.99.198.12. The Linux version of DNS is based on BIND, which powers most of the DNS servers on the Internet.

No one DNS server can hold all of the FQDNs and IPv4 addresses on the Internet. If a DNS server does not have a FQDN in its database, it can refer to other DNS servers. Once the server finds the right IP address, it adds the FQDN and IP address to its database.

However, as of this writing, Red Hat encourages the use of redhat-config-bind to configure your DNS server. Configuring DNS is not easy; redhat-config-bind is probably a better option for less experienced Linux administrators. This tool requires a GUI such as GNOME or KDE.

As we mentioned earlier, no single DNS server can contain the database of FQDN and IP addresses for the entire Internet. Because of the volume of associated data, it isn t practical to centralize DNS information. Therefore, DNS servers are organized in zones . Each DNS server has its zone of responsibility . DNS zones are based on the way FQDNs are organized.

Start with a basic FQDN, www.mommabears.com. . This includes a root zone, which is not the .com , but the period to the right of the .com .

The next phrase may be .com , .net , .org , and so on; these are known as top-level domains . In this case, mommabears is a subdomain of .com , and www is the name (or more likely the alias) of a computer with the Momma Bears web server.

You can configure four different types of DNS servers. As you ll recall from Chapter 21 , the IP address of any DNS server that you use should be listed in /etc/resolv.conf .

Master A master DNS server is the authoritative server for a specific zone, such as sybex.com . Queries for IP addresses from computers on the sybex.com network normally go to this server. Other DNS servers refer to this master for addresses of other networks and computers within sybex.com .

Slave Queries for IP addresses from within sybex.com can go to this server; it gets its FQDN/IP address database from a master DNS server.

Forwarding A forwarding DNS server does not store any FQDN/IP address information. It does store the IP addresses of other DNS servers in /etc/named.conf .

Normally, I encourage users to configure Linux services at the command-line interface. If you do so, you learn more about the service and can better customize the service for the network.

To configure a primary DNS server, start the GUI of your choice, open a text console window, and enter the redhat-config-bind command to open a Domain Name Service window similar to the one in Figure 24.1. When you first install DNS, the only entries are based on the local computer. 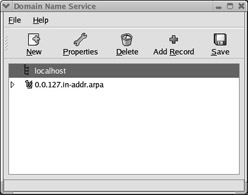 When you configure a primary or master DNS server, you re configuring /etc/named.conf and various files in /var/named . In the Domain Name Service window, click New. In the Select a Zone Type window, click the Forward Master Zone option. Enter a domain name; if you don t have one, example.com is an official generic domain name that you can use, as shown in Figure 24.2.

When you click OK, this opens the Name To IP Translations window shown in Figure 24.3. In this window, enter the hostname of your Primary Nameserver (SOA) ”your DNS server. Remember to add a period at the end of the hostname. 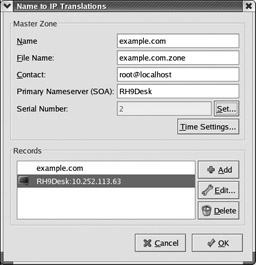 You also need to enter the IP address for your DNS server. When you click Add, the Add a Record window appears; click the Nameserver tab as shown in Figure 24.4. In the Domain Name text box, enter the hostname of your DNS server computer; note that the rest of the FQDN is already filled in. Also observe how your information is added by default to the reverse address table. In the Served By text box, enter the IP address of that computer. When you re done, click OK twice to return to the Domain Name Service window. 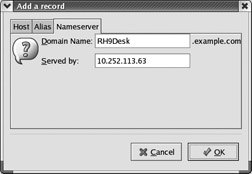 Now you ll add the Reverse Master Zone. Click New; this time, select Reverse Master Zone in the Select A Zone Type window. The text box now reads IP Address (first 3 Octets). IPv4 addresses include four numbers , also known as octets. For example, if your network IP address is 10.252.113.0, enter 10.252.113 in the text box and click OK. This opens a new IP To Name Translations window, as shown in Figure 24.5. 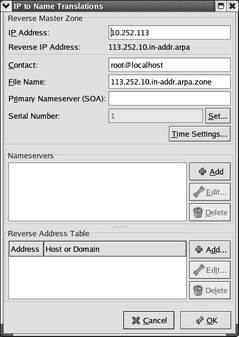 You need to reenter the information for your Primary Nameserver (SOA). You ll also need to click Add in the Nameservers section to add at least the IP address of that DNS server to the list. Click OK and repeat as needed.

Next, click Add in the Reverse Address Table section to open the New Reverse Zone Pointer window, shown in Figure 24.6. In this window, enter the IP address for a computer on your LAN and its hostname or FQDN.

Repeat the process until you ve added all the computers on your LAN to the Reverse Address Table. Don t forget the computer on your network with the DNS server. Click OK to exit the IP to Name Translations window. Now you ve created a master DNS server. To save the configuration, click the Save button. This saves your configuration in /etc/named.conf and in various /var/named files.

You can now start DNS using the instructions shown in the Starting DNS section later in this chapter. You can also configure a DNS slave server using redhat-config-bind , or configure all of your DNS servers by directly editing the appropriate configuration files.

You can also use redhat-config-bind to create a DNS slave server. Slave DNS servers are, by definition, on a different computer. They look to a master DNS server for database information.

Start redhat-config-bind on the second computer. Click New. When the Select A Zone Type window in Figure 24.2 appears, select Slave Zone, and enter the domain name for your network. Using the current example, that would be example.com . Click OK.

The Slave Zone Settings window should appear, as shown in Figure 24.7. The name of your domain and database filename should automatically appear in the Name and File Name text boxes. Enter the IP address for your primary DNS server in the Masters List text box, and then click Add. 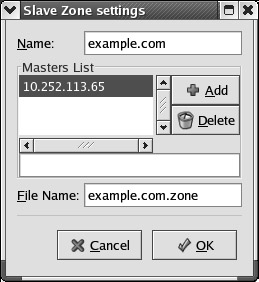 Several configuration files are required for a DNS server: /etc/named.conf and database files in the /var/named directory. You can use redhat-config-bind to create the settings for these files, or you can add them directly to these files with the text editor of your choice. It s helpful to examine each of these files in detail. 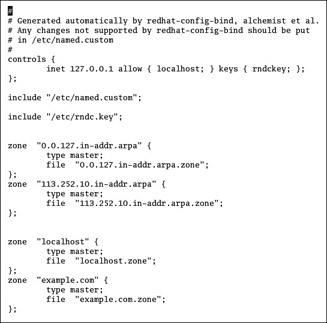 It s useful to break down this file, command by command. First, the following command allows only users on the local computer to use the rndc command to maintain this DNS server:

Next, the include directive adds the contents of the stated files:

The options directive specifies the directory with your DNS database files, usually /var/named :

But this does not include the database for the entire Internet; it is important to give your DNS server a way to access that database. It s available as the /var/named/named.ca file from the caching-nameserver-* RPM. You should add the following stanza to your /etc/named.conf configuration file to refer other queries to the root servers for the Internet:

If this were a secondary (slave) DNS server for the example.com network, you d need to first get information from the master DNS server (if the IP address for your DNS server is different, substitute accordingly ):

Alternatively, if this is a forwarding-only DNS server, for all domains you might see a different options statement, where the forwarders are the IP addresses of other DNS servers, perhaps for your ISP:

Finally, for a caching-only DNS, you ll need the caching-nameserver-* RPM package. It includes a version of /etc/named.conf that should work in most cases. The only question is whether there might be a firewall that blocks your requests to other DNS servers. If so, remove the two forward slashes from in front of this command, which serve as comment characters :

As you ve seen in Chapter 22 , even the default high-security Linux iptables firewall allows DNS requests through TCP/IP port 53. Without this command, requests to other DNS servers might be blocked since the latest versions of BIND often use other ports.

The database files that support a DNS server are by default located in /var/named . The files stored depend on the name of your domain, the IP address of your network, and whether you re supporting a regular or a caching-only DNS server. Some of the files you might see are listed in Table 24.2.

Now let us examine a forward and a reverse zone database file. Start with Figure 24.9, which is a view of the zone file for the hypothetical example.com LAN. 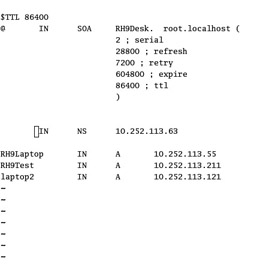 As you can see, this file contains a number of strange -looking commands. It essentially sets RH9 as the nameserver ( ns ) for the example.com domain, with three other computers on that network.

You may want to configure a couple of other types of servers on this network. For example, the following lines set up two different mail servers; the lowest number gets higher priority:

Table 24.3 explains some of the commands in this zone file.

Now look at the reverse database file in Figure 24.10. As you can see, it includes the same basic commands as in a regular DNS database file. The PTR records may appear a bit strange. 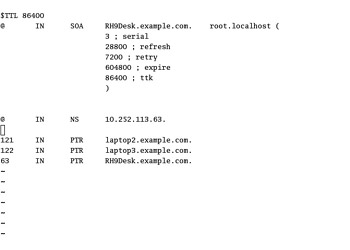 Once you ve configured DNS, you ll want to try out your new server. The easiest way to do this in Red Hat Linux is with the DNS service script. Remember, named is the daemon that runs the Linux DNS server:

Next, you ll want to see if it works. As described in Chapter 21 , the IP addresses of DNS servers are normally listed in /etc/resolv.conf . Once you ve started your nameserver, you can see how it works. Try the dig command, the DNS lookup utility, to look up a specific FQDN on the Internet. Figure 24.11 shows how this works. Note the SERVER line near the bottom of the figure, which illustrates that this comes from a DNS server on a computer on my local network, with an IP address of 10.252.113.63. 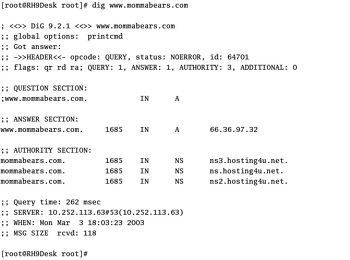 If you re satisfied with the result, remember to make sure named starts the next time you restart Linux. Use the chkconfig --level 235 named command to ensure this daemon starts at runlevels 2, 3, and 5.