On the Red Hat exams, you may be expected to upgrade your kernel by installing the latest Red Hat kernel RPM. You may be able to patch an existing kernel. Whatever you do, you should make a boot disk associated with your new or upgraded kernel with the mkbootdisk command.

Before we begin, it's important to understand the way kernels are numbered.

The version number associated with the RHEL 3 kernel may look a little confusing, but it tells you a lot about the history of the kernel. The standard RHEL 3 kernel is version 2.4.21-4.EL, formatted in a majorversion.majorrevision.patch-build format.

The second number (4) actually has two meanings. First, it indicates this is the fourth major revision of major version 2 of the kernel. Second, since it is an even number, it indicates that the kernel release is a stable release. If it were an odd number, it would be a developmental kernel, not suitable for production computers.

The third number (21) is the patch version number for the kernel. These changes are typically small changes, bug fixes, security fixes, and enhancements. Generally, you can use the zcat command to increment one patch at a time. For example, if your current kernel is version 2.4.21, you can use the patch-2.4.22.gz file to upgrade your kernel to version 2.4.22.

The fourth number (-4.EL) is a number added by Red Hat. This is the fourth Red Hat build of Linux kernel 2.4.21, which incorporates features customized for Red Hat Enterprise Linux.

During the lifetime of RHEL 3, you may find a security advisory which strongly suggests that you upgrade your Linux kernel. In this case, a Red Hat kernel RPM will be available through the Red Hat Network.

Upgrading a kernel from a Red Hat RPM is fairly easy. Basically, all you need to do is install the new kernel with the appropriate rpm command. When properly configured, the RPM automatically upgrades your default boot loader as well. For example, say you've just downloaded the 2.4.21-4.1.EL kernel RPM from one of the FTP servers with Red Hat RPMs to the /tmp directory.

Be careful. Install (-i), don't upgrade (-U) your new kernel. Otherwise, if you have a problem, you won't be able to go back to the old working kernel. Installing (-i) a new kernel with a command such as:

installs the kernel, initial RAM disk, System.map, and config files automatically in the /boot directory. In addition, the RPM automatically adds a new stanza to your boot loader configuration file. For GRUB, the file is /etc/grub.conf.

Sometimes, all you need is a simple patch to a kernel. Patches usually work fairly well if you're upgrading from one patch version to the next higher version, such as from 2.4.21 to 2.4.22.

Kernel patches are easily available from Internet sites such as ftp.kernel.org. For example, if you want to upgrade from kernel version 2.4.21 to kernel version 2.4.22, download the patch-2.4.22.gz file from the Internet. Copy the patch to the /usr/src directory. Move to that directory, and run a command similar to the following to make the upgrade:

If it doesn't work, you'll see files with a .rej extension somewhere in your kernel source tree. Use a command such as find to check for such files. If you don't find any of these files, you can proceed with the make clean, make menuconfig, and make dep commands as described in the next section.

The mkbootdisk utility creates a boot disk customized for your configuration. This is basically a rescue disk. After creating this disk, you can use it to simply boot your system, or you can type rescue at the boot prompt. Whenever you upgrade or install a new kernel, you should upgrade your boot disk. It's a simple command; in most cases, all you need to do is specify the version number associated with the desired kernel as follows:

This command automatically takes the kernel with the specified version number from the /boot directory and writes it with appropriate configuration information to the first floppy drive, /dev/fd0. Table 5-2 lists several other options that may come in handy when using mkbootdisk.

Here is another example of the mkbootdisk command:

This command creates a boot disk on the second floppy drive. It does not suppress output, nor does it prompt for a disk to be inserted. It uses kernel version 2.4.21-4.1.EL. When you boot Linux with this disk, you can use it as a rescue disk. Just type linux rescue at the boot prompt.

If properly configured, the Red Hat kernel that you install should automatically update your boot loader. But as a RHCT or RHCE, you need to know how to check. If the code described in this chapter has not been added, you'll need to know how.

Whether you're using GRUB or LILO, it is advisable to keep your old kernel in case something goes wrong. So you'll be adding a stanza to either /etc/grub.conf or /etc/lilo.conf. In either case, the changes that you'll make will be as if you're setting up two different operating systems.

Look at your /etc/grub.conf file. If you have Linux on your system and use GRUB, you should already have a stanza that points to the appropriate locations for your original Linux kernel and Initial RAM disk. For example, here is an excerpt from my RHEL 3 /etc/grub.conf file (which includes a dual-boot configuration with Microsoft Windows):

In Red Hat Enterprise Linux, the vmlinuz and initrd files are already in the /boot directory. Since you've copied the revised kernels to the same directory, all you need is a second stanza that points to your revised files. When I revised my kernel earlier in this chapter, my EXTRAVERSION variable in /usr/src/linux-2.4/Makefile was -4.ELcustom. The changes are in bold:

Since you don't need to load /etc/grub.conf into the MBR, no further action is required. The resulting GRUB menu looks like Figure 5-10. Note how the original kernel is set as the default. If you've watched closely, you'll note that in /etc/grub.conf, the value of default was changed from 0 to 1. If you want to set the default to the new kernel, change the value of default back to 0. 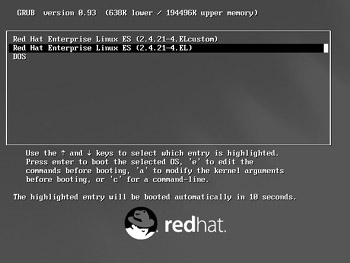 Alternatively, if you're using LILO as a boot loader, you'll need to revise /etc/lilo.conf. Add a stanza that points to the new kernel. Take a look at the following excerpt from /etc/lilo.conf:

From this information, you can see that the original kernel is called vmlinuz-2.4.21-4.EL. Assume LILO resides on the MBR and controls the boot process.

Now add another stanza for the new kernel.

Save this file, then run the lilo -v command. The output should resemble the following:

When you reboot, LILO will wait for you to enter a label, in this case, either linux or newLinux.