RHEL includes Red Hat's graphical configuration tool for Samba, system-config-samba, which you can install from the RPM of the same name. Before you use this tool to modify your configuration, back up the files in your /etc/samba directory.

Also known as the Samba Server Configuration utility, you can use this tool to set basic global parameters and configure shared directories. You can start it from a GUI command line with the system-config-samba command, or you can choose System (or KDE Main Menu) | Administration | Server Settings | Samba. You saw the basic tool back in Figure 10-3.

This tool is straightforward. You can configure general Samba directives such as security level and workgroup through the Preferences | Server Settings command. The Add button enables you to set up a new share.

The Samba Server Configuration utility may not do everything you need. To configure most global settings, special printer shares, to join a domain, to control Samba services, your fastest option is to work from the command line interface.

To see what the Samba Server Configuration utility can do to the global settings in the smb.conf configuration file, choose Preferences | Server Settings. As you can probably guess from Figure 10-7, the basic settings set the workgroup and server string directives. 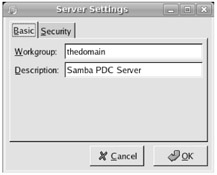 When you use this utility and assign default variables, it erases the variable from your smb.conf file. For example, if you set the workgroup name to WORKGROUP, this utility erases the workgroup command line from smb.conf. Therefore, it's an excellent idea to back up smb.conf before using the Samba Server Configuration utility.

In contrast, the Security tab supports a few more settings, as you can see in Figure 10-8. The entries are fairly straightforward. If you want more information on these variables, refer to the discussion on smb.conf earlier in this chapter: 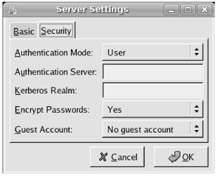 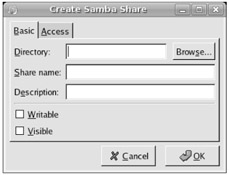 The Samba Server Configuration tool also allows you to configure Samba users, based on the users already present in your /etc/passwd configuration file. Unfortunately, it can use only local password databases as of this writing. However, that's good enough to configure Microsoft usernames on this computer. To add Samba users from the Samba Server Configuration tool, choose Preferences | Samba Users. This opens the Samba Users window shown in Figure 10-10. 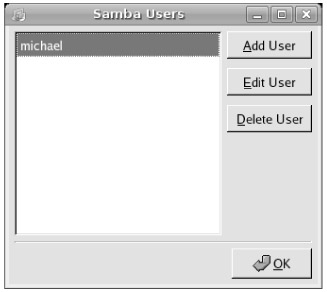 As you can see, this window includes a list of currently configured Samba users. Click Add User. This opens the Create New Samba User window shown in Figure 10-11, where you can:

Enter the directory that you want to share, /home/PublicShare, in the Directory text box. Enter an appropriate Description, and select Writable and Visible. In the Access tab, select the Allow Access To Everyone option. Click OK, and exit from the Samba Server Configuration tool with the File | Quit command.

Now you'll have to finish the task directly from the text editor. The instructions so far add the following commands in the /etc/samba/smb.conf configuration file:

You may want to modify these commands. Assume the [PublicShare] should be accessible to all users with a Linux account on your computer. It should also deny access to guest users and others. You want to provide access to anyone in your domain (.myCompany.com), and you want to deny access to a suspect computer (say, evil .crackers.com). Finally, your shares should be browsable to valid users.

To make this happen, change the last command in this stanza. As guest ok = no is the default, you can just erase the guest ok = yes directive command or change the value appropriately. To provide access to all users in the given domain, add the following command:

If you wanted to deny access to one specific computer on that network, you could add EXCEPT evil.crackers.com to the end of this command. Alternatively, if this domain is on the 192.168.99.0 network, you could use one of the following commands:

You could specifically deny access to computers with a command such as the following:

Or you could substitute IP addresses in the same format as with the hosts allow directive. You've defined the share attributes in the Samba smb.conf configuration file. But you need to modify the directory associated with the share with the following command:

The digit 1 in front of the 777 directory permission string is known as the "sticky bit." By enabling the sticky bit, you are saying that anyone can do anything in the directory (because of the 777 permission value) but only to files they create! Otherwise, any user could delete or rename any file in the /home/PublicShare directory, regardless of the file's owner.

After making any changes to /etc/samba/smb.conf, you should always test your system before putting it into production. You can do a simple syntax check on the Samba configuration file with the testparm test utility, as shown in Figure 10-12. This does not actually check to determine whether the service is running or functioning correctly; it checks only basic text syntax and command stanzas. 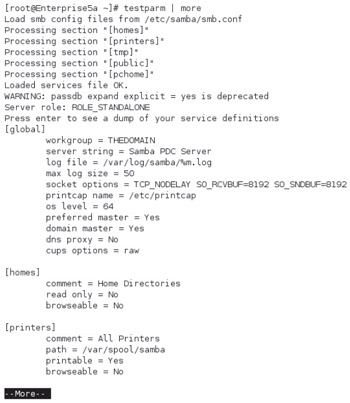 In this exercise, you'll configure Samba to do something useful: sharing a directory and any configured printers. For this purpose, you can't use the Samba Server Configuration tool; therefore, you'll need to edit the /etc/samba/smb.conf file directly in a text editor.

This final option allows you to change your Samba configuration without disconnecting users from your Samba server.

Managing Enterprise Systems with the Windows Script Host
Java How to Program (6th Edition) (How to Program (Deitel))
Practical Intrusion Analysis: Prevention and Detection for the Twenty-First Century: Prevention and Detection for the Twenty-First Century
Wireless Hacks: Tips & Tools for Building, Extending, and Securing Your Network
Cultural Imperative: Global Trends in the 21st Century
GDI+ Programming with C#
flylib.com © 2008-2017.
If you may any questions please contact us: flylib@qtcs.net
Privacy policy
This website uses cookies. Click here to find out more.
Accept cookies