Remember how hard it was to move the whale around the migration circle? PowerPoint 2002 and later versions make implementation of that slide much easier via a mechanism called a Motion Path .

Motion paths are set up using the last entry of the Add Effect menu on the custom animation pane. Access the More Effects option of this menu; there is a selection of pre-defined motion paths, including basic shapes, lines, curves and special paths. If you can't find the path you want to use among the pre-defined paths, use the Draw Custom Path option to create freeform shapes and lines.

As an exercise, take the whale and move him along the migration path from Spring to Summer.

Start with the slide showing the island, the names of all four seasons and the four pictures of the whale. Ungroup each of the whale/season pairs. Animate each whale so it appears when the appropriate season is clicked. The animation list should look like Figure 6-19: 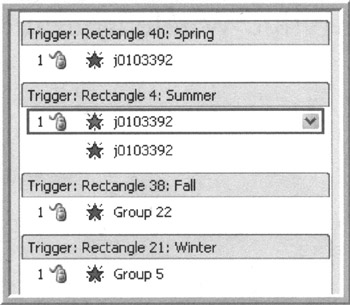 Click on the spring whale. Add a motion path curving up and over to summer. Notice the motion path shows on the slide as a dotted line with a green arrow, the starting point, at one end and a red arrow, the ending point, on the other end. An order indicator appears above the object.

Suppose the motion path curves in the opposite direction. Just right-click on the path and select Reverse Path Direction.

After adding the curved path and adjusting its length, the migration slide now looks something like Figure 6-20: 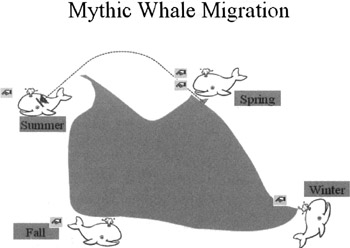 Playing this slide moves the whale from Spring to Summer. The only thing left to do with this whale is make it disappear when we start the summer whale on its path. To do that, create an exit animation for the spring whale and set it to trigger when the word Summer is clicked. Rearrange the order of the animations so the spring whale disappears as the summer whale appears. At this point, the animation list should look like Figure 6-21: 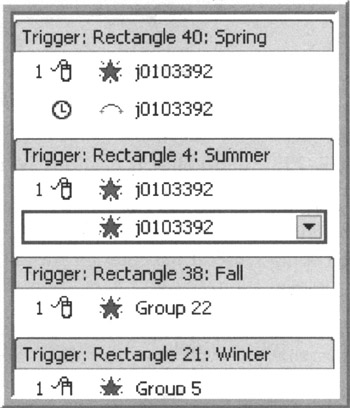 To complete the slide, add the same animation to the summer, fall and winter whales.

There are three path properties to be aware of:

For a motion path, the effects tab of the Effect Option window has four path options (Figure 6-22):

Smooth start and Smooth end clean the ends of the path as an attempt to avoid anti-aliasing problems. Whether or not you find these options useful depends on the setup of the system where the presentation is given.

Auto-reverse is useful for bringing objects back along the same path they originally traveled.