Router on a stick This includes one router (internal RSM/MSFC or external) and one switch. The router has a single connection to the network, which is the stick (see Figure 7.7). 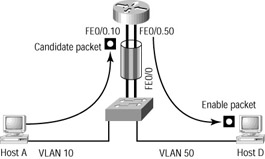 Multiple switches, one router This is acceptable if only one switch connects to the router and the switches are connected via an ISL trunk (see Figure 7.8). 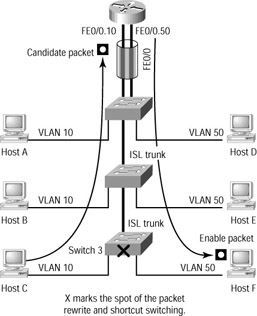 The second of the Cisco MLS implementations involves a process called Cisco Express Forwarding (CEF), which we will discuss in the next section.