Digital Equipment Corporation (DEC), which was purchased by Compaq before the merger with Hewlett-Packard, was the original creator of STP. Actually, Radia Perlman is credited with the main development of STP and should get the credit. The IEEE created its version of STP, called 802.1D, using the DEC version as the basis. By default, all Cisco switches run the IEEE 802.1D version of STP, which is not compatible with the DEC version.

The big picture is that STP stops network loops from occurring on your layer 2 network (bridges or switches). STP is constantly monitoring the network to find all links and to make sure loops do not occur by shutting down redundant links.

If you have other switches in your network, as shown in Figure 4.4, they are called non-root bridges. However, the port that has the lowest cost to the root bridge is called a root port and sends and receives traffic. The cost is determined by the bandwidth of a link.

Using spanning tree, a group of switches determines the best path from any point A to any point B. To do this, all the switches need to communicate and each switch needs to know what the network looks like. In order to know what links should be dynamically disabled, a root bridge must be selected and each switch needs to determine the type of each port.

Switches or bridges running STP exchange information with what are called Bridge Protocol Data Units (BPDUs). BPDUs are used to send configuration messages by using multicast frames. The bridge ID of each device is sent to other devices using BPDUs.

The following network analyzer output shows a BPDU broadcasted on a network. BPDUs are sent out every two seconds by default. That might seem like a lot of overhead, but remember that this is only a layer 2 frame, with no layer 3 information in the packet:

Notice the cost of path to root. It is zero because this switch is actually the root bridge. We'll discuss path costs in more detail in the upcoming section, 'Selecting the Designated Port.'

The preceding network analyzer output also shows the BPDU timers, which are used to prevent bridging loops because the timers determine how long it will take the spanning tree to converge after a failure.

BPDUs are susceptible to propagation delays, which happen because of packet length, switch processing, bandwidth, and utilization problems. This can create an unstable network because temporary loops might occur in the network when BPDUs are not received on time to the remote switches in the network. The STP uses timers to force ports to wait for the correct topology information.

When a switch first boots up, the only MAC address it knows is its own, so it advertises itself as the root. As it collects BPDUs, it will acknowledge another device as the root, if necessary. When a switch receives a BPDU advertising a device as root, with a better bridge ID than the current root is using, the switch caches this information and waits. It will wait the duration of the MaxAge timer before using the new root, allowing other switches in the network to also receive the BPDU. This reduces the possibility of loops.

To determine the port that will be used to communicate with the root bridge, the path cost is determined. The path cost is an accumulated total cost based on the bandwidth of the links. Table 4.2 shows the typical costs associated with the different Ethernet networks.

The IEEE 802.1D specification was revised to handle the new higher-speed links, hence the different costs shown in Table 4.2.

After the cost is determined for all links to the root bridge, the switch decides which port has the lowest cost. The lowest-cost port is put into forwarding mode, and the other ports are placed in blocking mode. If there are equal-cost paths, the port with the lowest port ID is put into the forwarding state. In the previous example, if switch B had two paths to the root, both with a cost of 42, the switch needs some other way of figuring out which single path will be used. If switch A is accessed via gigabit port 0/3 and switch C is accessed via gigabit port 0/7, switch B will send frames via switch A because it is attached to the lower numerical port number.

The selection of a designated port is fairly easy. If there are two switches that have equal-cost paths to get to the root and are connected to each other, there must be some way of resolving the topological loop that exists. The switches simply examine the bridge IDs, and whichever device has the lower bridge ID is the one that will be responsible for forwarding traffic from that segment. Figure 4.4, shown earlier, illustrates this point.

The ports on a bridge or switch running the STP will go through four transitional states:

Blocking  Won't forward frames; listens to BPDUs. All ports are in blocking state by default when the switch is powered on.

Listening  Listens to BPDUs to make sure no loops occur on the network before passing data frames.

Learning  Learns MAC addresses and builds a filter table, but does not forward frames.

Forwarding  Bridge port is able to send and receive data. A port is never placed in forwarding state unless there are no redundant links or the port determines that it has the best path to the root bridge.

Typically, switch ports are in either blocking or forwarding state. A forwarding port is a port that has been determined to have the lowest cost to the root bridge. However, if the network has a topology change because of a failed link, or the administrator adds a new switch to the network, the ports on a switch will be in listening and learning states.

Blocking ports are used to prevent network loops. After a switch determines the best path to the root bridge, all other ports may be placed in the blocking state. Blocked ports will still receive BPDUs.

If a switch determines that a blocked port should now be the designated port, it will go to listening state. It checks all BPDUs heard to make sure that it won't create a loop after the port goes to forwarding state.

Figure 4.5 shows the default STP timers and their operation within STP. 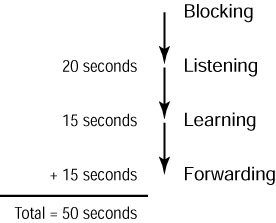 Convergence occurs when bridges and switches have transitioned to either the forwarding or blocking state. No data is forwarded during this time. Convergence is important in making sure that all devices have the same database.

The problem with convergence is the time it takes for all devices to update. Before data can start to be forwarded, all devices must be updated. The time it usually takes to go from blocking to forwarding state is 50 seconds. Changing the default STP timers is not recommended, but the timers can be adjusted if they need to be. The time it takes to transition a port from the listening state to the learning state or from the learning state to the forwarding state is called the forward delay.

Each device uses the timers configured on the root bridge. If the timers need to be changed, Cisco recommends that they not be changed directly. Instead, first experiment with the spantree diameter option. It will set the timers based on the size of the switched network. The larger the network, the more time is allowed for propagation, which increases the timers. The default diameter is seven switches across. Setting the diameter smaller than your actual network size increases the chance of broadcast storms.

Because 2950A has the lowest MAC address and all three switches use the default priority, 2950A will be the root bridge.

To determine the root ports on switches 2950B and 2950C, you need to look at the cost of the link connecting the switches. Because the connection from both switches to the root switch is from port 0 using a 100Mbps link, that has the best cost and both switches' root port will then be port 0.