You can think of layer 2 switches as bridges with more ports. Remember from Chapter 1 that layer 2 switching is hardware based, which means that it uses the Media Access Control (MAC) address from the hosts' network interface cards (NICs) to filter the network. You should also remember how switches use application-specific integrated circuits (ASICs) to build and maintain filter tables.

However, there are some differences between bridges and switches that you should be aware of. This section outlines those differences and then discusses the three functions of layer 2 switching.

The following list describes the differences between bridges and switches. Table 4.1 provides an overview of that comparison.

You probably won't go out and buy a bridge, but it's important to understand how bridges are designed and maintained because layer 2 switches function in a similar fashion.

There are three distinct functions of layer 2 switching:

Address learning  Layer 2 switches and bridges remember the source hardware address of each frame received on an interface and enter it into a MAC database.

The forwarding and filtering decision  When a frame is received on an interface, the switch looks at the destination hardware address and looks up the exit interface in the MAC database.

These functions of the layer 2 switch-address learning, forward and filtering decisions, and loop avoidance-are discussed in detail next.

The layer 2 switch is responsible for address learning. When a switch is powered on, the MAC filtering table is empty. When a device transmits and a frame is received on an interface, the switch takes the source address and places it in the MAC filter table. It remembers what interface the device is located on. The switch has no choice but to flood the network with this frame because it has no idea where the destination device is located.

If a device answers and sends a frame back, then the switch takes the source address from that frame, places the MAC address in the database, and associates this address with the interface on which the frame was received. Because the switch now has two MAC addresses in the filtering table, the devices can now make a point-to-point connection and the frames are forwarded only between the two devices. This is what makes layer 2 switches better than hubs. In a hub network, all frames are forwarded out all ports every time.

Figure 4.1 shows the procedures for building a MAC database. 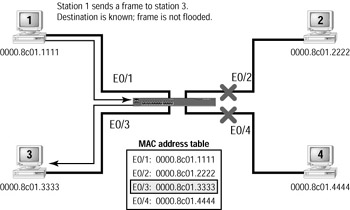 In the figure, four hosts are attached to a switch. The switch has nothing in the MAC address table when it is powered on. The figure shows the switch's MAC filter table after each device has communicated with the switch. The following steps show how the table is populated:

If the two devices do not communicate with the switch again within a certain time limit, the switch flushes the entries from the database to keep the database as current as possible.

The layer 2 switch also uses the MAC filter table to both forward and filter frames received on the switch. This is called the forwarding and filtering decision. When a frame arrives at a switch interface, the destination hardware address is compared to the forward/filter MAC database. If the destination hardware address is known and listed in the database, the frame is sent out only on the correct exit interface. The switch does not transmit the frame out of any interface except for the destination interface, thus preserving bandwidth on the other network segments. This is called frame filtering.

If the destination hardware address is not listed in the MAC database, the frame is flooded out all active interfaces except the interface on which the frame was received. If a device answers, the MAC database is updated with the device location (interface).

Remember, the layer 2 switches forward all broadcasts by default. The forwarding/filtering decision is a bit different because broadcast packets are designed to go to every device that is listening and multicasts are for every device listening for a particular type of packet. Whereas the MAC address of a given device is normally determined by the MAC address that is burned into the network card, broadcasts and multicasts need some way of targeting multiple devices.

A multicast is a slightly different animal in that it wants to go to every device that is participating in a certain process. If five routers are using the EIGRP routing protocol and one sends out an update, it sends the update to the multicast IP address 224.0.0.10. Each router is listening for any packet with that IP address as its destination, but devices don't look at the IP address when the frame is received-they look at the MAC address. There is a special format that MAC addresses follow when the packet is part of a multicast process. This process is covered in detail in Chapter 8, 'Multicast Technologies.'

When a switch receives these types of frames, the frames are then quickly flooded out of all active ports of the switch by default. To have broadcasts and multicasts forwarded out of only a limited number of administratively assigned ports, you create virtual LANs, which were discussed in Chapter 3, 'VLANs, Trunks, and VTP.'

Finally, the layer 2 switch is responsible for loop avoidance. It's a good idea to use redundant links between switches. They help stop complete network failures if one link fails. Even though redundant links are extremely helpful, they cause more problems than they solve. In this section, we'll discuss some of the most serious problems:

If no loop avoidance schemes are put in place, the switches will flood broadcasts endlessly throughout the internetwork. This is sometimes referred to as a broadcast storm. Figure 4.2 shows how a broadcast might be propagated throughout the network. 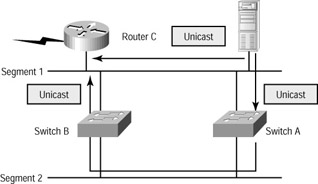 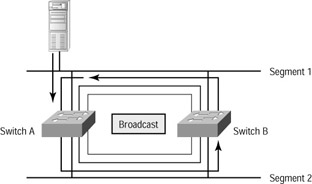 The MAC address filter table will be confused about where a device is located because the switch can receive the frame from more than one link. It is possible that the switch can't forward a frame because it is constantly updating the MAC filter table with source hardware address locations. This is called thrashing the MAC table.

One of the biggest problems is multiple loops generating throughout an internetwork. This means that loops can occur within other loops. If a broadcast storm were to then occur, the network would not be able to perform packet switching.

To solve these three problems, the Spanning Tree Protocol was developed.