The current Cisco range of switches represents the most powerful yet. Many of them have layer 3 switching capabilities in addition to layer 2, which means that they can almost be configured as a multi-port router. Many also run a version of the IOS as standard. The only two still running the set-based CatOS have an upgrade path to allow them to run IOS. Despite figuring in the current exam, CatOS is doomed.

This next section looks at the four main switch families in turn, and links together the technologies we have discussed so far in this chapter with the real world of Cisco products.

The 2950 series comprises a number of fixed configuration switches that can be operated in a stand-alone fashion or joined together in a stack. There are two distinctly different IOS-based software images (which are platform dependent and not interchangeable), allowing users to purchase the most suitable system for their environment.

All Catalyst 2950 and 2955 models have the Cisco Cluster Management Suite (CMS) software embedded in the operating system. (CMS is discussed later in this chapter.)

The basic architecture of the 2950 switches is shown in Figure 10.7.

The 2950 series switches operate only at layer 2, and all use a CAM for address lookup, and a shared memory switching fabric for forwarding frames. Shown next is the output from the show mac-address-table command executed on a WS-C2950-24 switch:

The 2950 stores the VLAN information in a separate database file (vlan.dat) from the one used for the configuration files (config.text). Shown next is the output from the show flash command executed on a WS-C2950-24 switch:

The 3550 Series Intelligent Ethernet switch comprises a number of fixed configuration switches that can be operated in a stand-alone fashion or joined together in a stack. More powerful than the 2950 switches, they provide several enhancements to both security and Quality of Service (QoS), thanks in part to the additional layer 3 capability of the IOS.

All Catalyst 3550 models have the Cisco Cluster Management Suite (CMS) software embedded in the operating system. (CMS is discussed later in this chapter.)

The 3550 series switches operate using a distributed shared-memory switching fabric. The forwarding decisions, at layers 2, 3, and 4, as well as CEF, are taken by 'satellite' ASICs located near the main shared memory. Figure 10.8 shows the relationship between the shared memory, the decision-making satellite ASICs, and the ring request mechanism. 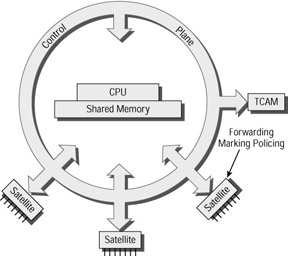 The 3550 switches operate at both layer 2 and layer 3, and use a CAM for address lookup at both layers for 10/100 Mbits/second interface traffic. All switches in the range use TCAM for faster switching because of the proliferation of Gigabit interfaces. You can tell which version of the switch you are connected to by using the show version command.

Shown next is the output from the show tcam command executed on the same switch. Very few entries exist in this TCAM, but the command can be used to view the remaining TCAM capacity.

The Cisco Catalyst 4000 Series switches are modular in construction, and are based around the Catalyst 4003 and Catalyst 4006 chassis, both of which operate using a shared memory switching fabric. A range of line cards supporting different arrangements of port numbers and speeds is available and is compatible with both chassis. The Cisco Catalyst 4000/4500 Supervisor Engine IV is the current 'heart' of the machine, comprising a fabric that Cisco defines as supporting, among other features:

The basic architecture of the 4000 series switches is shown in Figure 10.9. 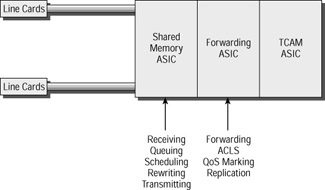 The model number of the 4000 series and details of the operating system are displayed using the show version command. The following shows the output when the command is executed on a WS-C4003 switch:

The bridging table in a 4000 series switch is held in the CAM. While this is considered fast enough for the 10/100 interfaces, the Gigabit Ethernet interfaces need more speed, and so a TCAM is used for both layer 2 and layer 3 lookup when the faster interfaces are installed.

Shown next is the output from the show cam command executed on a WS-C4003 switch. Note that it is possible to see either dynamic or static entries, and also to have them displayed by VLAN.

The 6500 series switches use a crossbar switching fabric. This is good, because as the heart of the Cisco high-end range, they are widely used as core switches, and need to ensure non-blocking throughput at very high speeds.

In addition, the 6500 series gains a large increase in throughput speed by using a process called Demand-Base Switching. This involves updating an ASIC-based cache with information from the first layer 3 packet forwarded at routing table speeds, and then switching the rest of the packets along the same path. The use of ASICs to manage this table increases the throughput by a factor of thousands. This is in addition to standard fast CEF table. The basic architecture of the 6500 switches is shown in Figure 10.10. 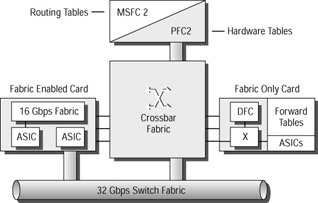 You can select the options you need in this modular architecture, taking into account both cost and requirements. For example, line cards can be installed with several configuration options, including: