The Universal Music Group (UMG) is the largest music corporation in the world, with 10,000 artists making CDs for it. For many of its artists, UMG maintains Web sites where fans can come to see pictures of the star in action, listen to snatches of the star’s music, and register their names. UMG has been testing the use of these registered names to promote new CD releases. One example is a new CD release called Essence by Lucinda Williams on a new label, Lost Highway. The pilot program was designed to determine whether online promotions would have an impact on music sales, and whether database marketing strategies and tactics would work in this industry. This was UMG’s first attempt to marry database marketing techniques with e-marketing activities. Universal introduces hundreds of new CDs during any given year. Lucinda Williams was not a well-known artist, and the genre of music called “roots rock” was just emerging as a new music style. This was not a Harry Potter type of marketing effort. UMG’s vice president of consumer information marketing, Joe Rapolla, sponsored the promotion and worked with Beth Clough, director of partner relations at msdbm in Los Angeles, to run the project.

The target audience included both existing fans (customers) of Lucinda Williams and prospects who matched the fan profile. The second most important audience was Universal Music managers in UMG’s New Media and Common Label Operations departments. These managers had been attempting to prove to management that online marketing could reduce costs and find new customers.

CDs Are Sold in Retail Stores

The Internet was widely used as a channel for music sales through many sites, such as Amazon.com, buy.com, and CDNow.com. However, more than 95 percent of all CDs were sold at retail stores. Most of these CDs were promoted by radio station disc jockeys. The goal of the project, therefore, was not to sell the new CDs over the Web. Instead, UMG wanted to use database marketing strategies to build its email customer base, to gather key information, and to encourage album sales. The market was filled with competing CDs. There were very few radio stations that aired the “roots rock” artists because of the small audience for this genre. Getting rack space for this type of CD was also difficult because it was a new genre of music and a new label. At the time the project began, there were no systems established to measure the success of such a program if success were to occur. UMG management had not given the idea much attention.

The primary objective of the campaign was to develop a successful integrated marketing strategy that would lead to incremental CD sales during the first week of the album’s release. The campaign included the following elements:

All of this had to be done in a situation in which there was no prior research and a very limited existing database of fans. All Joe Rapolla had was a file of a couple of hundred Lucinda fans who had registered 2 years before.

Beth’s first task was to develop a customer profile of Lucinda Williams fans based on the names in the existing database. She conducted online focus groups to get qualitative research on the audience for roots rock (see Figure 6-3). The focus groups each contained twelve participants and lasted for 1 hour. Each participant received a $75 cash reward through the mail after the focus group was over. Discussion in the groups centered on the roots rock genre, along with broader topics such as the participant’s level of involvement with favorite artists. 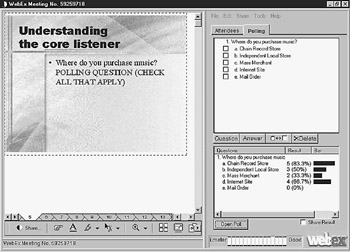 The advantage of an online focus group is that participants can “attend” from their home or office. UMG and msdbm managers were able to communicate directly with the moderator during the sessions. Unlike normal focus groups, online groups require no travel expenses or logistic setups such as meals or the renting of a hotel room. Turnaround time was faster than with traditional focus groups.

Based on this analysis, msdbm created an online microsite and database to deliver the promotion, capture the data, and report the results. The microsite included an online survey to capture information from the registrants (see Figure 6-4). 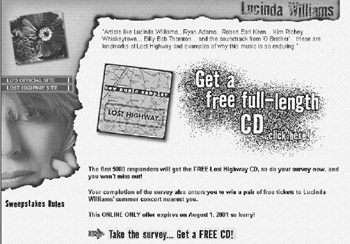 The second phase focused on program execution. Beth created a model that used the profile to point to the ideal prospect. Next, she did the research necessary to find email lists of prospects who matched the Lucinda Williams fan profile.

The subsequent email campaign consisted of a series of targeted communications, beginning with an outbound email campaign to fans and prospects promoting the release of Lucinda Williams’s album and a special offer for those who completed an online survey. Joint online promotions were conducted with the UMG sister company MP3 to expand the reach of the effort. In addition, UMG conducted guerrilla marketing efforts collaboratively with the company M80, which used the promotion to create excitement in the marketplace, increase sales and airplay of the CD, and ultimately drive traffic to the online promotion site.

Data on every responder were stored in the database, and the responder was profiled to see if he or she matched the anticipated type of listener. Responders to the special offer got a follow-up thank-you email with another survey (see Figure 6-5) and further promotion of the Essence album, encouraging them to purchase the CD. 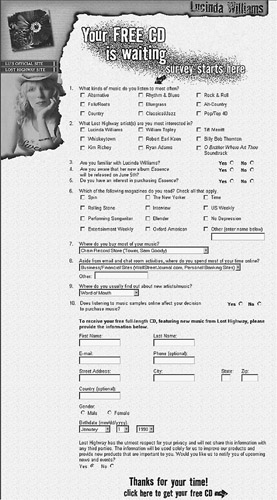 Special direct links to Amazon.com’s purchase page were developed so that visitors to the microsite who wanted to do so could make a

quick purchase. In addition, the site provided the names and addresses of local retailers who sold music. A music sampler was embedded into the site to give prospects an idea of the quality of the new artist and the new genre.

When the campaign was over, responders were sent a postcampaign follow-up email to determine which of them had purchased the CD and why or why not. Based on these responses, Beth conducted a post-campaign analysis measuring customer satisfaction and intention to purchase the Lucinda Williams CD.

Lucinda Williams was constantly on tour during this period. The gradually increasing fan database was used to send targeted city-specific emails to people who lived near places where she was holding her concerts (see Figure 6-6). 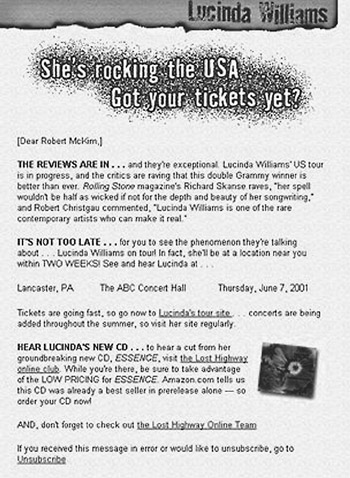 As part of the database-driven microsite development, msdbm developed a real-time report that was tied directly to the database (see Figure 6-7). Through this real-time report, msdbm tracked response information, including response by list source, publication, links, and statistical response to the online survey. UMG and Lost Highway were issued user names and passwords so that they could access the report at any time. The report also featured drill-down functionality so that the client could view response by segment, such as specific lists, publications, and so forth. 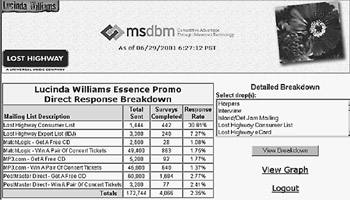 As a result of the campaign, the fan database grew 960 percent during the 3-month promotion. This campaign proved the value of email database marketing strategies in the music industry. UMG management was stunned by the results of this coordinated effort. It loved the real-time reporting and the ability to have a data-driven Web site. The overall campaign response rate (combined direct and indirect) for the 172,744 people who received emails was 15.5 percent, of which 50 percent reported that they had bought the new CD. Instead of a few hundred registered fans, the Lucinda Williams database developed nearly 26,718 registrants who could be used in further database marketing initiatives. UMG management, impressed with the results, decided to use this method for promoting new artists and staying one step ahead of its competition.

Using direct emails plus MP3, the campaign exposed Lucinda Williams to over 3 million people. The Essence CD ranked number one on Amazon.com and MP3.com for several weeks in a row during the promotion. The campaign generated interest and excitement among other UMG labels, which wanted to execute similar campaigns for other artists. It became the standard by which subsequent UMG campaigns were measured.

Six months later, the same technique was used for the UMG launch of an album by roots rock artist Shelby Lynne. This campaign:

The Power of Loyalty: 10 Essential Steps to Build a Successful Customer Loyalty Strategy

Customer Loyalty: How to Earn It, How to Keep It