As discussed earlier in this chapter, you can display the values of variables like this in PHP:

However, there’s a shortcut that you can use here. The values in variables are interpolated if you put them into double-quoted (not single-quoted) strings, which means that their values are inserted directly into the string. You can do that this way to convert the example from the previous code:

As you’d expect, this example displays Number of sandwiches: 1. 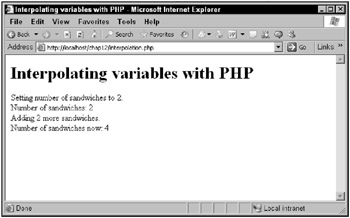 Interpolating can be useful, but it should be used with caution. What if you wanted to interpolate a variable named $data containing the word hot to the text dog? That might look like this:

This is not going to work, however, because PHP is going to start looking for a variable named $datadog, as you see here:

Instead, the way to do this is to enclose the variable you’re interpolating, $text, in curly braces, { and }, like this:

You do indeed get Want a hotdog? from this example. In general, variable interpolation is a handy shortcut, and one you’ll see often in PHP.