The next step up in PHP data handling from simple variables is to work with arrays, which are collections of data items stored under a single name, just as in JavaScript. Each element in an array can be addressed easily, by index.

For example, take a look at this PHP statement:

This statement actually creates an array named $sandwiches and sets the element at index 1 to ham. From now on, you can refer to this element as you would any simple variable; you just use the index value to make sure you reference the data you want, like this:

This statement would echo ham. You can add new values with different numeric indexes:

And, of course, you can store numeric values as well:

So far, the code you’ve seen has stored strings using numeric indexes, but, interestingly, you can also use string indexes. Here’s an example:

You can also create arrays with the array statement. Here’s an example showing how that works:

By default, PHP starts the numbering of array elements with 0. What if you wanted to start with an index value of 1? You could specify that with the => operator like this:

You can also create arrays with text as index values in the same way:

This creates the following array:

The => operator lets you specify key/value pairs. For example, "Pittsburgh" is the key for the first element, and 2343 is the value.

In fact, there’s another shortcut for creating arrays. If you have a well-defined range of data, you can automatically create array elements to match with the range function, such as the numbers 1 to 10 or characters a to z like this:

As in JavaScript, you can modify the values in arrays as easily as other variables. For example, say you have this array:

Now say you want to change the value of $sandwiches[2] to egg. You could do that like this:

Now say that you wanted to add a new element, pastrami, to the end of the array. You could do that by referring to $sandwiches[], which is PHP’s shortcut for adding a new element:

Want to verify that this array now holds what you think it should? You can loop over that array using the PHP for loop, which will be introduced later, but which works just like a JavaScript for loop.

Here’s how to use a for loop to loop over the array, in array.php:

The results are shown in Figure 12.7. As you can see, the code was not only able to modify $sandwiches[2], it was also able to add pastrami to the end of the array. 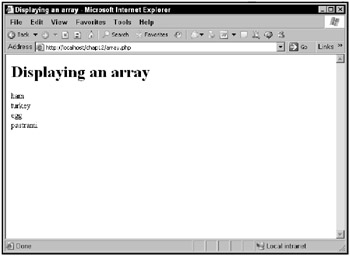 In addition to creating arrays, you can also copy arrays. For example, you can copy a whole array at once by assigning it to another array, like this:

This code, copyArray.php, echoes egg, as shown in Figure 12.8. 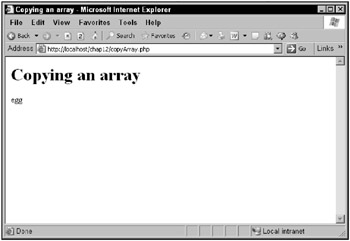 That’s a good overview on storing data in PHP, including variables, strings, and arrays. Now how about doing something with the data? That brings up the topic of PHP operators.