Many newer i5 systems are managed from the Hardware Management Console (HMC). This graphical work station allows advanced management of the system, devices, and partitions.

QSYSOPR is the name IBM gave to the built-in system operator profile, and it is the name of a user (just like any other) who can sign on to the system.

User profile QSYSOPR was created by IBM. When you install your i5, it already has QSYSOPR defined. You can sign on as QSYSOPR whenever you need to perform system operator tasks, such as backing up libraries and objects, restoring from tape, or powering down the system.

QSYSOPR has its own message queue that also is named QSYSOPR. This message queue is where the system sends error and informational messages about jobs that are running and need some kind of special intervention.

Typically, the system sends messages to QSYSOPR when it finds jobs that you or someone else submitted to batch through a job queue.

You can display the messages contained in QSYSOPR using the Display Message (DSPMSG) command. Supply QSYSOPR as the name of the user profile or the message queue:

The system presents a panel like that shown in Figure 3.1. 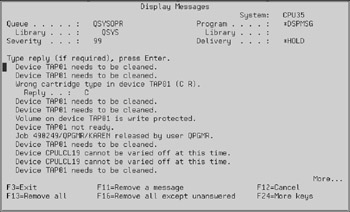 This panel offers several function keys to process the messages in different ways. These function keys are explained in detail in Chapter 8. However, you should never, under any circumstances, press F13 when you display QSYSOPR messages (you will see why in a moment).

Messages sometimes require a reply; these are called inquiry (*INQ) messages. The system sends inquiry messages when it wants to ask the system operator, for example, whether to ignore a certain error condition, to try again, or to cancel the job that produced the error. These three options are listed after the message, as in (C I R). ‘C’ stands for cancel, ‘I’ stands for ignore, and ‘R’ stands for retry.

You can remove (erase) a message from the DSPMSG panel by positioning the cursor at the appropriate message and pressing F11. If the message required a reply (which was not yet given), the system assumes the default reply. This reply may not have been the one you wanted to select.

Here is a simulated inquiry message that you could see in QSYSOPR:

The system is requesting another tape, probably to continue a save operation. The valid replies (or options) are listed in parentheses. The message replies for the i5 have been standardized so that the same letters are used to signify the same action all the time:

Other replies are possible, but you will see these four most of the time. At this point, you can do one of the following: