Reviewing the View Layer of the Mini HR Application

Struts and the View Layer

Struts' HTML/JSP View layer support can be broken down into the following major components:

Each of these components is examined in detail in this chapter, but first it is helpful to understand how they fit together in the View layer.

The following sections explain each of these major View components in detail.

JSPs are the centerpiece of the Struts View layer. They contain the static HTML and JSP library tags that generate dynamic HTML. Together the static and dynamically generated HTML gets sent to the user's browser for rendering. That is, the JSPs contain the code for the user interface with which a user interacts.

JSPs in Struts applications are like JSPs in any other Java-based Web application. However, to adhere to the MVC paradigm, the JSPs should not contain any code for performing business logic or code for directly accessing data sources. Instead, the JSPs are intended to be used solely for displaying data and capturing data. Struts provides a set of tag libraries that supports displaying data and creating HTML forms that capture data. Additionally, the tags support displaying content stored in resource bundles. Therefore, JSPs (coupled with Form Beans) provide the bulk of the Struts View layer. The JSP tag libraries glue those two together and the resource bundles provide a means of content management.

Form Beans are basic Java beans with getter and setter methods for each of their properties, allowing their data to be set and retrieved easily. The org.apache.struts.action.ActionForm class is the base abstract class that all Form Beans must descend from (be it directly or via a subclass). Because Form Beans are simple data containers, they are principally composed of fields, and getter and setter methods for those fields. Business logic and data access code should not be placed in these classes. That code goes in Model layer classes. The only other methods that should be in these classes are helper methods or methods that override ActionForm's base reset( ) and validate( ) methods.

Following is an example Form Bean:

Often, it's best to have Form Bean fields be Strings instead of other types. For example, instead of having an Integer-type field for storing a number, it's best to use a String-type field. This is because all HTML form data comes in the form of strings. If a letter rather than a number is entered in a numeric field, it's better to store the value in a String so that the original data can be returned to the form for correcting. If instead the data is stored in a Long, when Struts attempts to convert the string value to a number, it will throw a NumberFormatException if the value is a letter. Then, when the form is redisplayed showing the invalid data, it will show 0 instead of the originally entered value, because letters cannot be stored in numeric-type fields.

To use Form Beans, you have to configure them in the Struts configuration file. Following is a basic Form Bean definition:

Form Bean definitions specify a logical name and the class type for a Form Bean. Once defined, Form Beans are associated with actions by action mapping definitions, as shown next:

As previously stated, the abstract ActionForm class has a reset( ) method that subclasses can override. The reset( ) method is a hook that gets called before a Form Bean is populated with request data from an HTML form. This method hook was designed to account for a shortcoming in the way the HTML specification dictates that browsers should handle check boxes. Browsers send the value of a check box only if it is checked when the HTML form is submitted. For example, consider an HTML form with a check box for whether or not a file is read-only:

For most cases, this behavior is fine; however, it is problematic when Form Bean boolean properties have a default value of "true." For example, consider the read-only file scenario again. If your application has a Form Bean with a read-only property set to true and the Form Bean is used to populate a form with default settings, the read-only property will set the read-only check box's state to checked when it is rendered. If a user decides to uncheck the check box and then submits the form, no value will be sent to the server to indicate that the check box has been unchecked (i.e., set to false). By using the reset( ) method, this can be solved by setting all properties tied to check boxes to false before the Form Bean is populated. Following is an example implementation of a Form Bean with a reset( ) method that accounts for unchecked check boxes:

The reset( ) method in this example class ensures that the readOnly property is set to false before the form is populated. Having the reset( ) method hook is equivalent to having the HTML form actually send a value for unchecked check boxes.

A side benefit of the reset( ) method hook is that it offers a convenient place to reset data between requests when using Form Beans that are stored in session scope. When Form Beans are stored in session scope, they persist across multiple requests. This solution is most often used for wizard-style process flows. Sometimes it's necessary to reset data between requests, and the reset( ) method provides a convenient place for doing this.

Following is an example Form Bean with a validate( ) method:

The Lifecycle of Form Beans 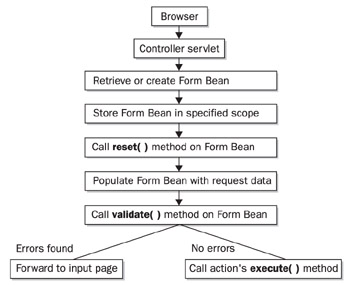 The following snippet illustrates how Dynamic Form Beans are configured in the Struts configuration file:

While Dynamic Form Beans shift the declaration of Form Beans and their fields from concrete classes to the Struts configuration file, an argument can be made that they don't save that much time. You still have to explicitly define each field for the Form Beans in the Struts configuration file. Thus you are really only getting the benefit of not having to recompile classes each time a change is made to the definition of a Form Bean. To further reduce the amount of overheard required in creating Form Beans, you can use what's known as a Lazy DynaBean. Lazy DynaBeans come to Struts by way of the Jakarta Commons BeanUtils project that Struts uses throughout the framework for bean manipulation. As

of Struts 1.2.4, you can simply declare a name for a Form Bean in the Struts configuration file and specify its type as org.apache.commons.beanutils.LazyDynaBean and no other configuration is needed. The Lazy DynaBean will accommodate any form properties sent to it from an HTML Form. That is, no fields need to be explicitly declared for the Form Bean. An example of configuring a Lazy DynaBean is shown here:

As you can see, it is very simple and fast to set up a Lazy DynaBean, saving much of the time traditionally spent in explicitly declaring the fields a Form Bean has.

Using simple properties and nested properties on Form Beans will satisfy most requirements; however, there are scenarios where it is necessary to use a collection as a property. For example, when creating a form that has a variable number of fields, a collection must be used to capture the field data because the exact number of fields is not known in advance. Collection properties are also useful for transferring and displaying a variable-length list of data returned from the Model layer of an application. Struts supports two types of collection properties: indexed properties (e.g., arrays and java.util.List descendants such as ArrayList) and mapped properties (e.g., java.util.Map descendants such as HashMap).

Indexed properties are those properties that are backed by an indexed collection, such as arrays, ArrayLists, etc. To use an indexed property, you must set up the proper type of getter and setter methods in your Form Bean, as shown here:

Struts takes care of calling the getter and setter methods for indexed properties with the proper index when capturing data from a form or when populating a form. The following example illustrates how to reference an indexed property using the Struts tag libraries:

Notice that an index is specified for the departments field using [ ] notation. When this hypothetical form is submitted, an index of 0 and the value entered in the control will be used to populate the proper element in the collection. While this example illustrates how to reference a specific element in an indexed property, the real power of indexed properties is realized when a loop is used so that individual element indexes don't have to be specified. The following example illustrates how to use a loop to iterate over an indexed property's elements.

Mapped properties work much the same way that indexed properties do-only they are backed by java.util.Map descendants instead of arrays or java.util.List descendants. The syntax for referencing elements in a map differs as well. Instead of using [ ] notation to specify an index, ( ) notation is used to specify a key in the map. An example Form Bean with a mapped property is shown here.

Struts comes packaged with a set of its own custom JSP tag libraries that aid in the development of JSPs. The tag libraries are fundamental building blocks in Struts applications because they provide a convenient mechanism for creating HTML forms whose data will be captured in Form Beans and for displaying data stored in Form Beans. Additionally, the Struts tag libraries provide several utility tags to accomplish things such as conditional logic, iterating over collections, and so on. However, with the advent of the JSP Standard Tag Library (JSTL), many of the utility tags have been superceded. (Using JSTL with Struts is covered in Chapter 17.)

Following is a list of the Struts tag libraries and their purpose:

Later in this book, each of these libraries has an entire chapter dedicated to its use, but this section provides a brief introduction to using the tag libraries, focusing on the core Struts JSP tag library, the HTML Tag Library, as an example. This library is used to generate HTML forms that, when submitted, populate Form Beans. Additionally, the HTML Tag Library tags can create HTML forms populated with data from Form Beans. To use the HTML Tag Library in a Struts application, your application's JSPs must declare their use of the library with a JSP taglib directive:

Because "html" was defined as the prefix, the form tag was used as shown. However, if you chose to use a prefix of "strutshtml", the tag would be used the following way:

The rest of this section explains how to create a resource bundle properties file and configure Struts to use it. An example of accessing resource bundle content from a JSP is also shown. Later chapters provide specific information about how to use resource bundles in the context of those chapters' topics.

The following snippet configures the resource bundle with Struts:

The parameter attribute of the message-resources tag specifies the fully qualified name of the resource bundle properties file minus the .properties file extension. In this example, a file named MessageResources.properties would be stored in the /WEB-INF/classes/com/jamesholmes/minihr directory.

Once a properties file has been created and configured in the Struts configuration file, the resources in the bundle can be accessed from several places in the Struts framework. The most common place is in JSPs. The following snippet illustrates how to use the Bean Tag Library's message tag to load a message from the resource bundle:

The value specified with the message tag's key attribute is the key for a message in the resource bundle. At run time, Struts retrieves the message and places it in the JSP.