JUnitPerf (http://www.clarkware.com/software/JUnitPerf.html) was written and is maintained by Mike Clark of Clarkware Consulting. It can be downloaded and used free of charge. There are two main types of performance tests that JUnitPerf supports:

To start, the following code defines a timed test for the simple JUnit EmployeeSearchServiceTest class that was created earlier in the “Testing the Model” section. Of course, the test execution should be integrated into the Ant build.

As you can see, this class is somewhat atypical of previous unit tests in that it does not extend TestCase. It does, however, provide a suite method that returns a Test. This method creates a test suite of a JUnitPerf TimedTest by wrapping a test suite created from the original EmployeeSearchServiceTest. The maximum time that the test should take to run is passed in as the second parameter to the TimedTest. This test can be run just as any other JUnit test—that is, using the JUnit test runners, IDE/JUnit integration, or via an Ant task.

Another tool, in the open-source domain, for testing and measuring the performance of Web applications is Apache JMeter (http://jakarta.apache.org/jmeter). JMeter allows a developer to create and run test plans against running applications. It was originally designed for testing Web sites so it is well suited for most Struts applications. JMeter provides a Java Swing user interface for creating and running test plans. Performance metrics are gathered and can be visualized graphically as well as in other formats. To get started, you need to first download JMeter and install it. Follow the provided documentation to create a test plan. You can create thread groups that simulate a number of concurrent users. Then, you can specify the details of an HTTP request to test. Figure 20-4 shows an HTTP request configured to access the Search by Name feature of the Mini HR application. 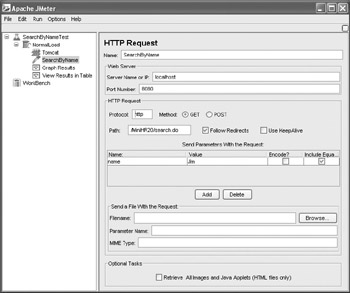 The request is configured to access the URL http://localhost:8080/MiniHR20/ search.do. In addition, request parameters can be specified. In this case, the query string name=Jim will be added to the request.

The test can then be run against the running server and the results are accumulated for each result listener. Figure 20-5 shows the display using the Graph Results listener. The thread group, in this case, was configured to run with 20 concurrent users, each making 25 requests to the Search page—a total of 500 data points. 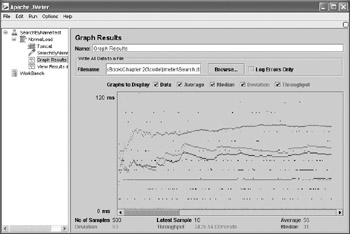 From the results, you can see that on average the search could be performed in a bit over 50 milliseconds, with some requests taking as long as 120 milliseconds. JMeter is a powerful tool and has a great deal more capabilities than described here. It is well documented and has many additional features that you may want to use.