This section deals with four problems facing a WBEM client:

These questions are answered in the subsections below.

At the time of writing, the task of finding a particular WBEM server (i.e., a WBEM server supporting a particular namespace) is being addressed by the DMTF's InterOp Working Group . It appears that the recommendation, when it emerges, will use the IETF's Service Location Protocol (SLP) and several WBEM server implementations , including openPegasus, have produced code based on that assumption.

SLP is described in RFC2608 and is effectively a protocol whereby so-called User Agents, acting on behalf of clients, can search for a particular service. This can be done in a small network by multicasting or broadcasting requests and in a larger network by making use of a Directory Agent. If you are familiar with CORBA, it might be useful to think of the Directory Agent as a Trader Service, receiving and storing registrations by servers and responding to requests from clients seeking a particular service.

WBEM servers register themselves with a Directory Agent or, in smaller networks, respond to multicast requests from clients.

Finding the Capabilities of the WBEM Server

Anticipating the problem of finding what operations a particular WBEM server supports, the DMTF has defined several classes which all WBEM servers must implement. These classes, which qualify for Olympic honours in any name length competition, are described in detail in the DMTF's "CIM InterOp Model" white paper (DSP0153) and are illustrated in Figure 13.1. 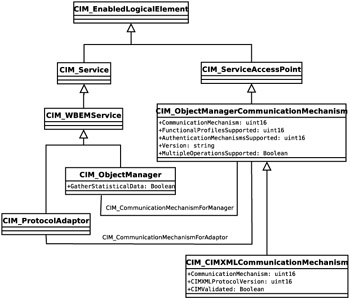 These classes inherit from the CIM_Service and CIM_ServiceAccess-Point classes described on page 92. If you are hazy on these two important classes, then I strongly recommend that you reread that section.

The instances of the CIM_ObjectManagerCommunicationMechanism class are, however, the main source of information. They contain information about how the WBEM server may be accessed:

The InterOp common model from the DMTF also covers the question of determining the namespaces supported by a WBEM server. The CIM_ObjectManager class described above has an additional association, CIM_NamespaceInManager, which associates it with a CIM_Namespace class.

Getting Statistics From the WBEM Server

If the CIMOM is collecting statistical data (see the GatherStatisticalData property of CIM_ObjectManager), then one instance of the CIM_CIMOMStatisticalData class is created for each type of intrinsic method call handled by the WBEM server.

As you can imagine collecting these data can consume a lot of processor time and their collection should be turned on circumspectly.