Let's say that we want to dynamically create a button that will be able to close the parent form. To create this button, we have to declare it in the private or public sections of the form.

The best place to create this button is in the OnCreate event of the main form. To create the button, we have to call the TButton constructor. 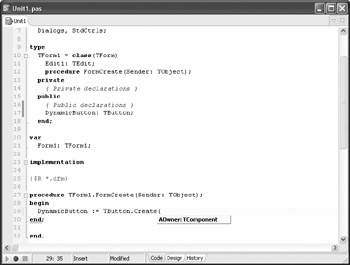 Now that we've defined the button's parent, it will be displayed on the parent's surface. But it's hard to identify this control since it's situated in the top-left corner of the form and has no caption. 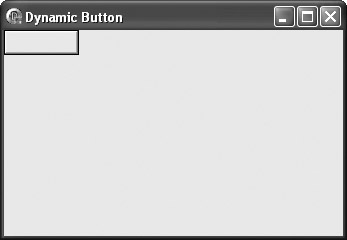 To completely define the button that will enable the user to close the form, set the Caption to "Close".

TNotifyEvent is a custom type and defines a procedure that accepts a single TObject parameter.

So, a procedure that is compatible with the OnClick event has to accept a single TObject parameter.

Listing 12-9: A method compatible with the OnClick event

The first thing you have to do is declare an object variable in either the private or public section of the class. The component must be declared as a pointer because all VCL components must be heap allocated:

In Delphi, after we declared a TButton variable, we had to add the StdCtrls unit to the uses list in order to compile the code. In C++, we don't have to include the StdCtrls unit because it is included in all VCL Forms projects by default.

Now that you've declared the necessary variable, you can switch to the source code file and create the object dynamically in the form's constructor. To create the component, you have to use the following syntax:

Here's the code that creates the DynamicButton button:

You don't have to worry about destroying the button because we passed this in the button's constructor, which means the form will destroy it when the application terminates.

As you can see from the above declaration, the TNotifyEvent type is a procedure that has only one parameter, an object pointer named Sender. The (__closure *TNotifyEvent) part of the declaration is the equivalent of Delphi's "of object" syntax, which is used to define a method pointer.

So, to add an event handler to the DynamicButton's OnClick event, first add the method's header to either the public or private section of the class:

When you've added the method header to the class interface, write the method's implementation: