Forms are the most important container controls in VCL Forms applications because they represent main or secondary application windows and contain all other controls like buttons, images, and menus. Delphi's TForm class is an extremely powerful class that encapsulates an enormous number of properties, methods, and events.

This part of the chapter deals with properties and events of the TForm class that enhance the quality of the user interface, either visually or practically.

The ActiveControl property can be used to specify which control should have the focus. When a control has focus, it can receive keyboard input. Only one control at a time can have the focus.

When you add controls to the Designer Surface, the focus may be given to a control that doesn't need it at application startup. For instance, the form shown in Figure 12-1 is designed to acquire the user's name, but instead of the more important text box, the Add button has the focus. In previous versions of the Windows operating system, or in XP and later versions that use the Classic visual style, the control that has the focus usually displays a dotted rectangle on its surface. Operating systems that use visual styles to display controls use the visual style's custom image to identify a focused control.

To transfer the initial focus to the text box, select the Edit1 component from the drop-down list of the form's ActiveControl property. 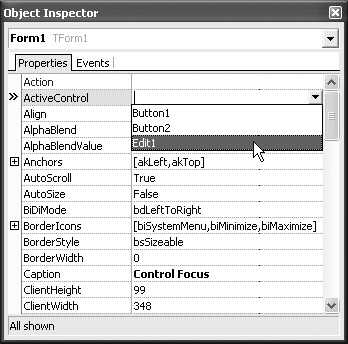 Figure 12-2: Assigning a control to an object property

Listing 12-1: Assigning focus to a control

You should think twice before enabling alpha blending on the main form because such forms are slower and the user may have trouble seeing the contents of the form. 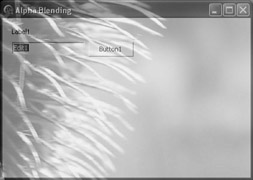 If you really want to have an alpha-blended form in your application, you should only enable alpha blending on forms that are used a short period of time, like the splash screen or the application's About box.

To completely configure a form and make it look and work like you want it to, you usually have to modify three properties: BorderIcons, BorderStyle, and Position.

The BorderIcons property is a set property that specifies which icons appear on the title bar of the form. The most important value in the BorderIcons set is the biSystemMenu value. If biSystemMenu is included in the BorderIcons set, the title bar displays the application icon, the Close button, and the system menu when you click the application icon. The biMinimize and biMaximize values display the Minimize and Maximize buttons, respectively. If you only include the biMinimize value, the Maximize button is also displayed, but it is disabled. The biHelp value displays the Help button. The Help button is only intended to be displayed on dialog boxes and its purpose is to provide context-sensitive help for the controls on the form. 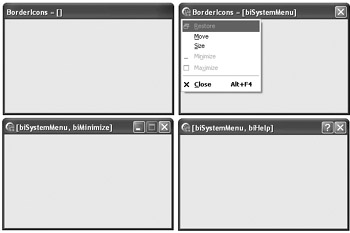 The BorderStyle property specifies both the visual appearance of the form and the form's behavior. The default setting, bsSizeable, defines a form that has a thick border and enables the user to resize the form. The bsSingle value defines a form with a thin border that cannot be resized. The bsSizeToolWin and bsToolWindow values enable us to define toolbar windows, windows that look like standard windows but have thinner title bars.

The most extreme of all values is the bsNone value, which produces a non-resizable form that has no title bar and no borders (see Figure 12-5). This setting is very useful if you want to create a custom user interface. 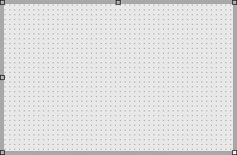 Although the bsNone value gives you complete control over the user interface, the form cannot be moved or resized. If you want to use a form without the system title bar in your applications, you need to write the code that allows the user to move your custom form on the screen. There are several ways to provide this functionality, and the way that requires the least technical knowledge is the one that uses the form's mouse events to move the form.

Basically, what we have to do is:

The OnMouseDown event handler provides a lot of information. The Sender parameter identifies the component that called the procedure. The Button parameter is an enumeration that identifies which button was pressed:

The Shift parameter is a set parameter that identifies which system keys and which mouse buttons were pressed when the event occurred, and the X and Y parameters hold pixel coordinates of the mouse pointer.

Inside the OnMouseDown event handler, you have to test whether the user pressed the left mouse button and save the X and Y coordinates for later use. To save the X and Y coordinates, you should declare two integer variables in the private section of the form. In addition to the integer variables, you have to declare a Boolean variable that will be used to identify whether or not the user can move the window.

Listing 12-5: Moving the form in the OnMouseMove event

Finally, we need to write code that stops moving the window when the user releases the left mouse button. When a button is released over a form, the form fires an OnMouseUp event. The OnMouseUp event provides the same parameters as the OnMouseDown event, but we actually don't need parameters. We only have to set the FMoving variable to False, and the user won't be able to move the window until he or she presses the left mouse button again.

Now that you can move the borderless form on the screen, you can create custom user interfaces, like the one displayed in Figure 12-6. 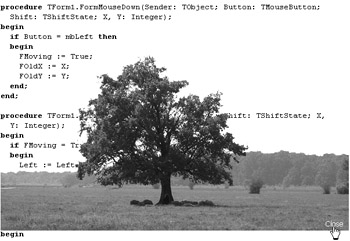 It's actually pretty easy to create partially transparent forms like the one displayed in Figure 12-6. The first thing you need to have is the bitmap that you want to display on the form. Next, you need to define a transparent color, that is, a color that will be treated as transparent. In this example, magenta (fuchsia, RGB(255, 0, 255)) was selected as the transparent color. 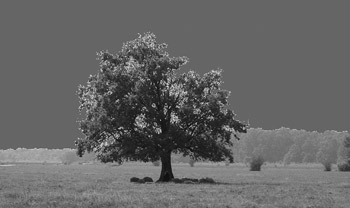 Next, you have to place the bitmap on the form. The easiest way to display an image on the form is to use the TImage component, which can be found in the Additional category. 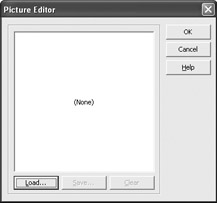 That's it. When you run the application, you should be able to see a partially transparent form. But if you try to move the form, you'll notice that the code no longer works. Actually, the code still works, but it's never called because the TImage component covers the surface of the form. When a mouse button is pressed or released, or when the mouse pointer is moved, the TImage component receives the notification of these events, not the form. Thus, the TImage component fires its OnMouseMove, OnMouseDown, and OnMouseUp events.

What we have to do now is move the form in response to the mouse events of the TImage component. But we don't have to rewrite the code that moves the form because Delphi enables us to assign a single event handler to more events. Thus, to enable the user to move the form, we have to call the existing event handlers in response to the TImage's mouse events. To do this, select the TImage component, display the Events tab on the Object Inspector, and assign appropriate event handlers to the OnMouseDown, OnMouseMove, and OnMouseUp events (see Figure 12-9). 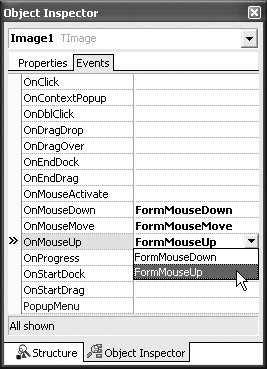 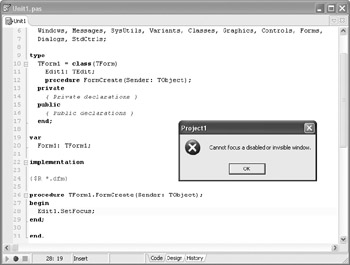 Figure 12-10: SetFocus causes an error because the form isn't visible.

The solution to this problem is really simple. If a method causes trouble in the OnCreate event, call the method inside the OnShow event.

Finally, to execute a piece of code when the application shuts down, write the code in the OnDestroy event handler.

Figure 12-11: The user interface of the example application