When the project is created, the IDE enables all the tools that can be used to design and develop VCL Forms applications (see Figure 11-1). 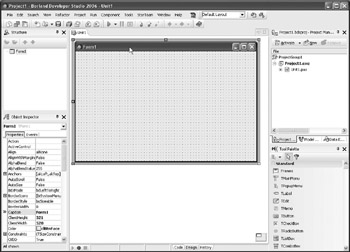 Before we thoroughly examine how VCL Forms applications function, let's change the title bar text of the main form to "My First VCL Application." 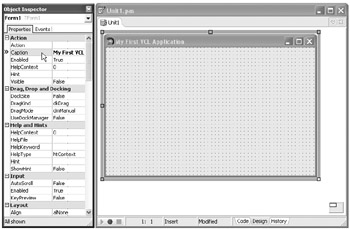 Before running the application, be sure to use the File ® Save All option to save the project files to disk. We have to use the Save All option because VCL Forms applications usually consist of more than just the main project file (.dpr). VCL Forms applications contain forms that are defined by two separate files: the Delphi form file (extension .dfm) and the form's unit (extension .pas). Accept the automatically generated names and run the application (see Figure 11-3). 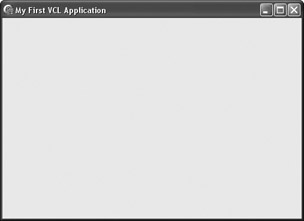 Every time a user presses a key on the keyboard, moves the mouse cursor, activates another application — in general every time an event occurs — the operating system creates a message that describes exactly what happened and sends that message to the appropriate window. When developing VCL Forms applications, we see these messages as events, and all that we have to do is write code that responds to a specific event. The Events tab in the Object Inspector displays the list of events to which the main form can respond. 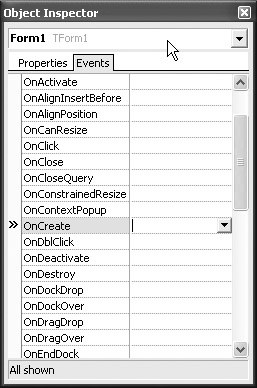 If you run the VCL Forms application from the Delphi IDE, you won't be able to see the Object Inspector until you close the application.

The interface section of the unit contains the declaration of a new class: TForm1. Every form we create inherits the properties, methods, and events of the TForm class declared in the Forms unit.

The implementation section of the unit currently contains a very important line of code:

The $R compiler directive is used to include a resource file into the executable at compile time. Resources are files like images, cursors, sounds, and Delphi form files.

Unit1.pas, and thus the form file has to be

If you remove the $R compiler directive, the application will successfully compile but will not be able to run (see Figure 11-5).

The Delphi IDE automatically updates both the source code and the form files when we add, remove, or modify components at design time. Although it's best to leave this job to the Delphi IDE, there are situations where you might have to modify the contents of the form file yourself. The form file can be easily modified because it is a text file that can easily be viewed inside the IDE. If you want to see the textual representation of the form, right-click anywhere on the Designer Surface and select the View as Text option from the context menu. 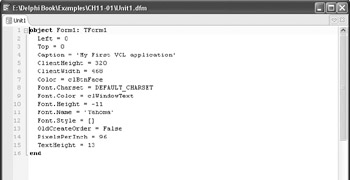 When you compile a VCL Forms application, the form's source file and the form file are compiled into a compiled unit file (.dcu).