Backing Up the Operating System

The bulk of this chapter has detailed how to back up and restore your SQL Server databases. However, for a complete backup and restore plan, which directly impacts your disaster recovery plan, you also need to back up Windows. In many cases, restoring backups is easier than rebuilding the system from scratch. With Windows, you have different backup options available to you, which are listed here:

To back up your operating system and its associated files, you can use a third-party tool or you can use the built-in tool that ships with all versions of Microsoft Windows 2000 and Microsoft Windows Server 2003: Backup. To access the Backup tool, use the Start menu and go to the Accessories folder under System Tools. You can also launch Windows Backup if you run Ntbackup.exe from a command prompt, and you can also run it with command-line switches as well. It is flexible to meet the needs of your company. Figure 10-14 displays the main Backup window.

You should back up your systems prior to and after you make any changes (such as service packs or hotfixes), and periodically in between. As long as the snapshot of your system is accurate, you do not need to back up all system files every night. You are concerned about the changes because unless you are using the server as a file system (which you should not be), the only files that will probably change are the SQL Server backup files. You should have a process to back up the SQL Server backup files after they are generated.

Backup is a fairly straightforward utility to use. This section provides a basic overview of how it works.

To create a backup using the Backup tool, follow these steps:

If you click Advanced, you will see the Advanced Backup Options dialog box, as shown in Figure 10-17. The most important information here is the backup type; it tells the program which type of backup to perform. Click OK to close this dialog box, and then click Start Backup in the Backup Job Information dialog box to back up your choices. 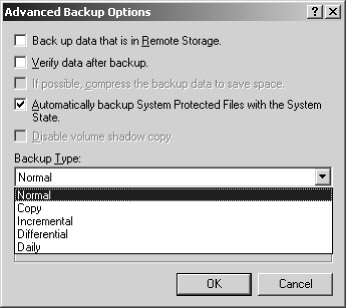 To restore a backup using the Backup tool, follow these steps: