When we were first considering content for a chapter on parallax scrolling, the example we thought of right away was the 1980s arcade hit Moon Patrol. This game featured a multilevel scrolling background as the moon buggy remained fairly static in the foreground, giving a nice 3D feeling of the vehicle moving over a lunar landscape. We thought we could create a similar setup here ”though transplanted to the Red Planet this time. 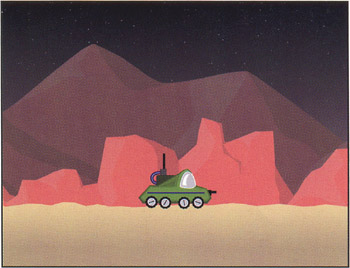 This tutorial will focus on explaining the ActionScript that is necessary to move the background landscape planes across the screen. You will constantly assess locations of the planes as they move so that you may remove clips once they leave the left side of the stage (they will be moving left, simulating movement of your vehicle to the right), and then attach new clips when needed off the right side of the stage, thus creating a seamless landscape scroll. As you code, keep in mind that for the effect to work, you need to move the landscape planes at different rates depending on their relation to the foreground ”more specifically , the planes farthest away from the viewer will move the least.

The file marsPatrol_start.fla has already been set up for you with all of the graphics prepared in its Library, though you will be attaching all of the clips and adding the necessary code for the scrolling effect. Note, however, that the finished project will not be a complete game, but merely the framework to build upon. Take a look at marsPatrol_end.swf to see how far we're going to take this project. Pay particular attention to the different levels of scrolling mountains (also, see what happens when you press the left, right, and up cursor keys).

Test your movie to see what you have set up, though right now there's not much to look at. We've already preprogrammed the bouncing of the wheels (though they don't as yet rotate) with the following code, which you can find inside the wheel instance in the Library:

Since the wheels would continue moving throughout the entire game, we thought taking care of it using an onEnterFrame for each wheel would be the best way to go about it. As you can see, every frame the wheels will rotate a little based on two variables : the constant value of the rover's wheelRotSpeed variable and the changing value of the rover's speed variable. You will set both of these variables later in this tutorial. The _y position of each wheel is also set generating a random number between -2 and 2 .

You'll see the wheels working in just a few steps. First, let's work on making the ground move beneath the rover to get the game rolling (sorry about the pun!).

This method of leapfrogging the clips is an effective way to seamlessly scroll a background. Perhaps it's not ideal for a game situation (or at least this game), since the ground plane will need to display different characteristics at different stages, such as craters to jump over, but it serves our purpose as a simple demonstration of scrolling. We will explore another, perhaps more useful, form of attaching and removing scrolling clips in the next section.

The next step is to add the second landscape plane to your stage, the mesas. You will do this completely dynamically using an empty movie clip, so you will only see the completed effect in the published file. The movie clip itself will hold all of the code to move the mesas, so it makes sense to place all of the graphics for that plane inside that movie clip. This technique will allow you to add multiple planes to your game with the confidence that each plane will act independently of all other planes, making things more modular and easier to alter and update.

Test your movie now to see the mesas moving and the parallax scrolling really adding to the depth of the animation.

Now that you have your landscape moving, you need to take care of your user 's sprite, which should be interactively included in the scrolling effect. First, you will add some code that will allow the rover to respond to keyboard input.

You Say You Want a Revolution

Everything is working fine to start, though your wheels are still are not turning, despite your new wheelRotspeed variable. This is because the wheels are attempting to access a property of rover named speed , which you have yet to set. This property will be the perceived speed of the rover based on its position on the stage, so when the rover is on the right side of the stage it should appear to be going faster, and when it is on the left it should appear slower.

The way you will get this illusion to work is by altering the rate of rotation of the wheels as well as changing the scrolling speeds of each of the landscape planes. Since everything should be relative in a scrolling landscape, you can use a single variable that will return a percent that each plane (and the wheels) can look to. This is what is accomplished with the variable speed.

The final step in our parallax scrolling experiment is adding some bounce to the patrol vehicle.

Now, if anything is stored in jumpMove, it will be called and the rover will move in the appropriate direction.

That's it! You have successfully completed a believable scrolling background system for a Flash game. Landscape planes move at different rates based on their relative distance from the user, as well as the relative speed of the foreground sprite. The way we have set it up, it's also fairly easy to add further planes of animation to your game. Now all you need are the hazards, enemies, and weapons. 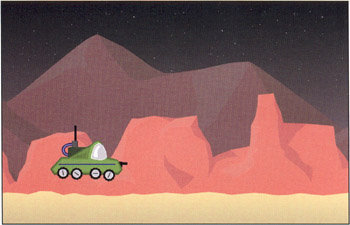