In this first example, we'll step through the technique of manually tweening your animation planes to simulate depth. The main idea of this method, and with parallax scrolling in general, is that you separate your animation into distinct planes (typically housed in movie clips) that you tween at separate rates. Each plane should consist of whatever elements exist at that particular depth in your animated world. For this exercise, the drawings have all been completed for you (they are available for download along with the rest of this book's examples from www.friendsofed.com ), so you can concentrate on the camera movement and how you can use parallax scrolling to give your animated world more dimension.

What you will be creating are the opening shots for an episodic animation entitled Wyvern's Claw, which is a Philip Marlowe/Sam Spade-type film-noir detective story transplanted to a fantasy setting. Imagine this setup: the camera is fixed on the nighttime sky as a voiceover begins (" There are a million stories in the naked city..." ”you get the general idea). Slowly, the camera tilts and pans down on the town where our tale takes place. Cut to a typical street in the town as the camera is dollied forward, down the street. The final establishing shot of the opening voiceover will be of the inn where our hero resides, which we'll slowly move toward before cutting to the interior of his room.

Look to the storyboard below to get a better idea of our task, and then, as a teaser, open up wyvernsClaw_end.swf to see the completed project: 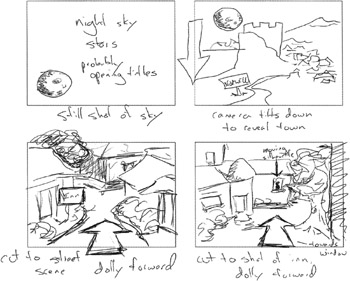 Often with animations, you will see scrolling that is parallel to the viewing plane (think of the repeating backgrounds in a Hanna-Barbera cartoon such as Scooby Doo or The Flintstones ). This is pretty easy to achieve, and the next two examples explore this. For manual tweening, though, you can be a bit more adventurous. The only thing you need to remember is that objects farther from the camera will move less than objects nearer to the camera.

Not bad for a first shot!

The next shot of our camera moving forward down a street will only require two keyframes at the start and end of the sequence.

The final shot moves the camera around a building and toward the inn, which houses the hero of our piece. Keep an eye on how the building in the foreground right moves more than any other movie clip on the stage, while the buildings behind the inn remain fairly still. This all goes to aid in the illusion of depth for our 2D drawings.

In this demonstration, you have successfully used manual tweening of multiple animation planes to simulate depth, plus you've made a pretty cool animation in the process!

Next, we will look at how we can incorporate parallax scrolling into Flash games to enhance the pseudo-3D feel.