Knowing that smaller objects appear farther away, we can immediately put this knowledge to use and trick our eyes into seeing depth where there actually is none. Before we can think of setting up our scene (or mise-en-scne ), we need to create some objects to place in it. For the sake of simplicity, we're going to create one of the simplest fake 3D objects you can create in Flash: a sphere, complete with lighting and shadow effects.

In the previous effect, you saw that your sense of depth is primarily affected by the size and placement of objects within the scene. To create the effect, you eyeballed the scaling of the objects and used trial and error until you arrived at a scene that was aesthetically pleasing and believable. For a simple scene, this isn't too much of a problem, but what if you want to create an illustration of a busy downtown street with people, cars , buildings , and streets ? How can you make sure that everything fits into the perspective of the scene? Fortunately, painters started pondering the same question thousands of years before the first line of code that was eventually to become the program we now know and love as Flash was ever written. The solution they came up with, sometime around the 1500s, was to use perspective grids. There are three types of perspective grids that you can create to help you lay out your faux-3D scenes: one-point, two-point, and three-point. The points refer to the number of vanishing points in each grid.

For example, here's a hand-drawn one-point perspective grid with the spheres from the previous example. It is a one-point grid since, if you were to extend the vertical lines up past the horizon, you would see that they eventually meet at a single vanishing point. 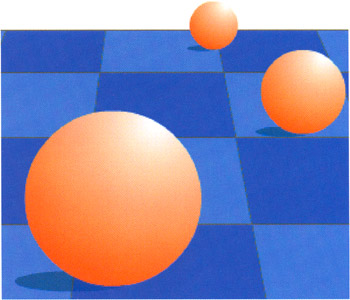 Macromedia FreeHand: The mother of all perspective grids

The perspective grids that we've discussed are essential to creating 3D scenes with accurate perspective; however, they do not go beyond being helpful static guides (or cool background images for our scenes). Wouldn't it be nice if we could somehow draw an object and have it fit into our perspective grid automatically? Although the Flash authoring environment doesn't currently have this as a built-in feature, it is entirely possible that someone will eventually come up with a layout manager component that does just this, using Live Preview from within the authoring environment. A program that does have this ability as a standard feature is FreeHand, Macromedia's vector illustration tool.

If you don't have FreeHand, download the trial version ( www.macromedia.com/downloads/ ) and take it for a spin. Then send an email to < wishlist @macromedia.com > asking them nicely if they wouldn't mind including this killer feature in the next version of Flash to make all our lives easier! 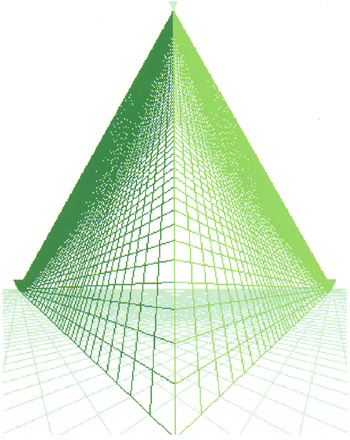