The best a game s interface can hope to do is to not ruin the players experience. The interface s job is to communicate to players the state of the world and to receive input from players as to what they want to change in that game-world. The act of using this input/output interface is not meant to be fun in and of itself; it is the players interaction with the world that should be the compelling experience. But since the interface determines how players interact with the world, if that interface is not up to the task then at best players will become frustrated and at worst players will be unable to perform the actions they want.

The Sims user interface is a beautiful example of how to do an interface correctly. It provides players with a staggering amount of information about the game-world, while allowing players to easily and intuitively make whatever changes they want. Unlike many modern action games , the tutorial primarily provides players with information about how to play the game, not how to manipulate the interface. The interface is so simple and intuitive that players pick it up with very little difficulty, no doubt the result of rigorous playtesting. Indeed Wright has stated that ten versions of the interface were thrown out before they arrived at the version with which they shipped. The fact that help is embedded throughout the interface is key, allowing players to click on any text item for an explanation of how it is important and why it is relevant. 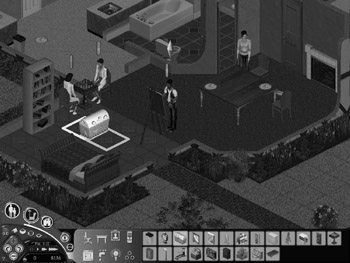 The Sims has an extremely intuitive interface that includes multiple ways for the player to accomplish the same action.

A big part of the success of The Sims input/output scheme is its similarity to systems players are likely to understand before they ever start playing the game. For instance, the buttons that determine the game s simulation speed look like those one would find on a tape player, something with which almost all players will be familiar. A large amount of the interface is reminiscent of Microsoft Windows, with the pointing and clicking players do mirroring that OS wherever appropriate. Item manipulation is reminiscent of Windows as well; players can use drag and drop to place objects, or simply click and click. The standard Windows X appears in the upper right-hand corner of dialog boxes to indicate that they can be closed, and the regular OK/Cancel button combinations are used wherever appropriate. While the functionality mirrors Windows in many ways, it is important to note that the appearance of the interface does not look exactly like Windows. All of the buttons are nicely drawn in a friendly art style that is a far cry from Windows cold, utilitarian sterility. If the game used the actual dialog box art that Windows provides, players would instantly be reminded of working with the file picker or some other Windows interface, not an experience they are likely to remember fondly, certainly not as a fun activity. However, by putting a new visual style on the behavior of Windows, the interface is intuitive and familiar to players without actually reminding them of file management.

Another example of this is the head menu used throughout the game. When players-want to have a sim perform an action on a particular object, players simply click on the object in question. From there a floating head of their current sim appears, with a range of different actions the sim can perform surrounding it in a circle. Players then simply move the mouse over to the action they want and click on it. While moving the pointer around, the sim s head actually tracks the cursor, watching it wherever it goes. This menu functions identically to a pop-up menu in Windows, but with several distinct advantages. The first is that it does not look like a pop-up menu, and thereby players do not associate it with boring Windows functionality. Second, the menu only lists the options that are available for the current object at that time. A normal pop-up menu would list all of the objects possible, with currently unavailable options grayed out. Third, by having the sim s head in the center, the menu brings players closer to the core of what they are doing: directing the sim to perform a certain action. The directive they are giving to their beloved sim is more intimate than it would have been through a more sterile, bland , and standard pop-up menu.