Back Up Your Data

Back Up Your Data!

We all know that unexpected computer glitches happen-hard drives fail, or files become corrupted, or you accidentally delete an essential file, or something else makes it impossible to open and read a file-but most of us don't bother to make regular backup copies of the important files stored on our computers until after we experience a loss. The information on your hard drives-including personnel files, financial records, manuscripts, and accumulated e-mail messages, among other things-is often more valuable than the computer hardware. If you can't find a way to reconstruct your business records, you may no longer have a business.

Home computer user can face similar problems. If old tax records, family photos and e-mail are on a failed disk drive, they could be lost forever if you don't have backup copies.

So it's essential to back up your data files. Windows includes a simple utility that can create regular backup copies of selected files and folders; many third-party backup programs offer somewhat more sophisticated solutions to the same problem. You can find more about the Windows Backup program later in this section.

Choosing a backup program is just one of the decisions you must make when you establish a backup plan. The others include:

The Backup utility supplied with Windows is not the fastest or the most flexible backup tool you can use, but it's already installed on your computer, so it's entirely adequate for many users. To create backup copies of your files, follow these steps:

To restore files from your backup media, use the Restore and Manage Media tab in the Backup Utility shown in Figure 48.3. Choose the files you want to recover and click the Start Restore button. 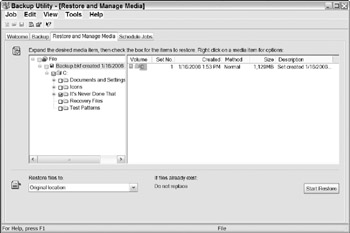 Figure 48.3: Use the Restore and Manage Media tab to retrieve files from your backup media.

To automate your backup process, open the Schedule Jobs tab and click the Add Job button to run the Backup Wizard, where you can choose the type of backup and the interval between backups.