Your Mac OS X comes with software that can be used to back it up. Unfortunately, it does not include anything that could reasonably be considered an all-purpose backup tool. .Mac members can use the Backup software included with their accounts to back up documents and other account data, but this is hardly a comprehensive systemwide tool. The final topic of this chapter will take you through the available built-in applications, as well as some third-party applications you might want to look into.

The ditto command can be used to copy any Mac OS X directory structure from one location (or volume) to another. It can even be used to create complete booting copies of the operating system. It is not an incremental backup tool, but it can do what most standard Unix command-line tools can't: copy complete files, including their resource forks.

The ditto syntax is

If you'd like a GUI face on ditto , download Carbon Copy Cloner at http://www.bombich.com/software/ccc.html. Carbon Copy Cloner, shown in Figure 20.2, is shareware, and can be used to easily copy complete, bootable Mac OS X volumes . 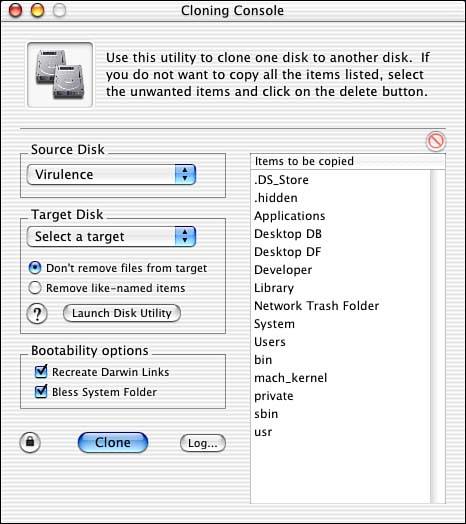 The dump and restore commands work together to create an incremental backup system. Although typically used with tape drives (which are unsupported in Mac OS X's dump / restore ), these commands can also be used to back up to disks, removable media, and remote tapes. Unfortunately, they do not support the HFS+ file system, so unless you've based your system on UFS, their usefulness to you may be quite limited. As you may guess from the names , dump creates the backup, and restore restores it.

The syntax for dump is simply

As always, the complexity is in the details. Table 20.2 provides a reference for dump .

Several of these options ( b , d , s ) are obviously related to backups that involve a tape device. Because Mac OS X doesn't support tapes at the command-line, these can be used only when backing up to remote tape drives, which, again, must be configured under Linux or another Unix flavor. If you do decide to use dump, read through the manpages; a number of more obscure options are not shown here.

After running a dump to a file, device, or remote tape, you can subsequently restore the contents by using the restore command. As with dump , the basic syntax is simple:

Obviously, options are required for telling restore what it is restoring. The most common command-line options are shown in Table 20.3

When running in interactive mode ( -i ), restore reads the backup file, then drops the user into to an interactive shell where they can pick and choose the files and directories that they want to restore.

When using restore , remember that you're not working within your Mac OS X file system; you're viewing the contents of the dump file. What you see is what is available to restore, not what is currently on your system.

Again, unless you're in an all-Unix environment, dump / restore might not be appropriate for your system.

Dantz's Retrospect 5.0 for Mac OS X comes in a variety of different flavors, from a standalone "Retrospect Express" for a single computer to Retrospect Server, capable of backing up Windows and Mac OS 9/X clients and even sensing and archiving notebook computers as they connect to the network.

Retrospect is a full incremental backup solution that supports hundreds of storage devices, features built-in scheduling, and can automate offsite backups by storing information on FTP servers, as shown in Figure 20.3. 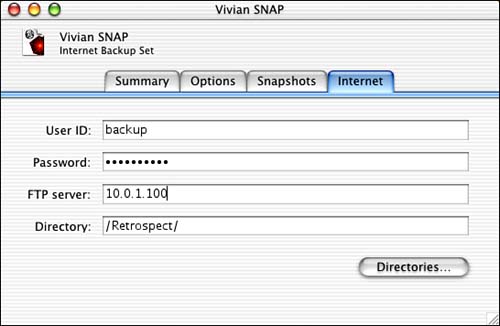 Whether you are running multiple Macintosh or Windows computers on a network or a single standalone computer, Retrospect is a wise investment. It provides a comprehensive cross-platform backup solution that behaves like a Macintosh application.

The Disk Copy utility that comes with Mac OS X can create perfect disk images of a source volume. If you've downloaded .dmg or .img files before, you've worked with disk images. The entire contents of a partition can be copied to an image, giving you a complete archive of the partition at the time it was captured, including file ownerships and permissions. Because the image is stored in a single file, you can store multiple images on a single backup volume (such as a CD-ROM or Firewire Drive).

To create an image, start Disk Copy and choose New Image from Device (Option+Command+I) from the File menu. A device selector window appears, as shown in Figure 20.4. Expand the disk objects by clicking the disclosure arrow in front of each line. The disks display all available partitions. If only a single partition exists on the disk, you select it by choosing the disk itself; you cannot expand it in the list. 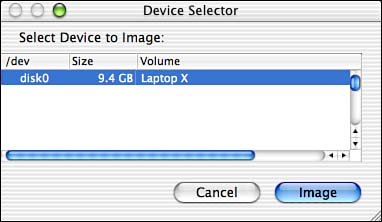 Choose one of the disks or partitions and click the Image button. Mac OS X prompts you for image's destination, format (Read-only, Read/Write, Compressed), and whether or not it should be encrypted. If you're creating a backup, I recommend choosing a read-only format. The "compressed" format also results in a read-only image, but unless you're short on space, the length of time it takes to compress the image is rarely worth the space savings. Finally, don't bother with encryption unless you're storing a backup of sensitive information. Encrypting an image is also a time-consuming action, not necessary for most backups.

To create an image from a folder within a partition, choose New Image from Folder or Volume from the File menu. You can then choose what data to image by using the standard Mac OS X file browser.

To create and manipulate disk images from the command line, you can use the hdiutil utility. hdiutil provides all the features of Disk Copy, accessible through a relatively simple syntax: hdiutil <verb> [options] . Available options are dependent on the verb. Several common verbs and options are shown in Table 20.5 hdiutil sports a large number of verbs and options, and I recommend reading the full man page to see all of them. Those provided in the preceding table are sufficient for most common tasks , such as imaging and burning CDs or DVDs of critical directories on your system. For example, the following sequence creates a new disk image, mounts it, copies the contents of my home directory to it, unmounts it, and, finally burns the image to a CD.