In this section, we describe some basic notions of multidimensional data and geographic data needed to define the cooperation approach. They are based on the common concepts discussed extensively in several proposals.

The geographical data model under consideration is based on the existence of sets and definitions discussed by Pourabbas & Rafanelli (2000) as follow:

A geographical class is a set of elements called geographical objects go1, go2,…, gon, which have the same properties A1, A2,…, An, defined over the set of not necessarily distinct domains D1, D2,…, Dn, and a set of methods which describe the behavior of the objects.

Definition 3: a geographic class (gc) is a quadruple:

Definition 4: A geographic object go instance of a geographic class gc represents a geographic entity of the real world. It consists of a quadruple:

Definition 5: The root class (rt) is the superclass of all the geographic classes. It is a quadruple <n,sc,P,M>, where sc = Φ (void class) because its parent does not exist.

Definition 6: A method is a triple

As we mentioned earlier, the Contains relationship between a pair of geographic classes, named gc1 and gc2, indicates that the instances of the class gc1 are included in the instances of gc2. This implies that the geo-feature of gc1 is internal to or on the boundary of the geo-feature of gc2; for instance, at the intentional level "REGION Contains MUNICIPALITY," and at the extensional level "Tuscany Contains Florence" and "Latium Contains Rome."

In the rest of the chapter, we will refer to only three spatial relationships named Geo-Disjunction, Geo-Union, and Geo-Touching which are, respectively, equivalent to disjoint, union, and meet operators defined by Egenhofer & Franzosa (1991).

The above definition shows that Full-Contains induces a partially ordered relationship among geographic classes and objects. It satisfies the conditions of the summarizability (disjointness and completeness) of statistical databases discussed by Lenz & Shoshani (1997) from a topological point of view for the GDB environment. The description of these conditions will be given in the next sub-section.

In Figure 1, the class-subclass hierarchy defined by the ISA relationship is shown, as well as the Full-Contains relationships between the geographic classes representing the administrative subdivision of the Italian territory. 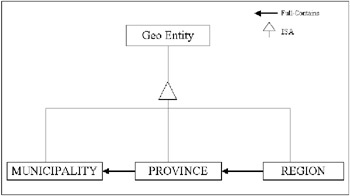